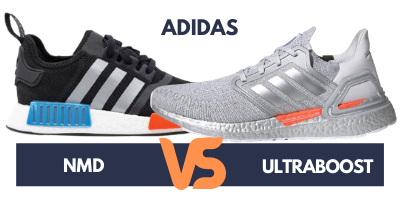 Today, we have a very special comparison for you, the Adidas NMD vs UltraBoost.

I know it’s very confusing for someone that maybe hasn’t had any of them and you’re wondering which one should you purchase for what you’re looking for.

Related: Can you run in Nike Air Max?

First off, remember that the NMDs and the UltraBoosts are different and are designed for different purposes.

The UltraBoost is a performance running shoe and the NMDs are literally lifestyle shoes.

Could you run in the Adidas NMDs?

The Adidas NMD comes in both a mesh and Primeknit version while the UltraBoost has a Primeknit upper.

For the sake of this comparison, we’re going to focus on the Primeknit version of both shoes.

If you’re asking me, Primeknit is equivalent to Nike’s Flyknit. However, the Primeknit feels really good and it just feels well-crafted.

The Primeknit upper on the UltraBoost is more of a weave and there’s also some mesh in the back that’s a little bit different.

The UltraBoost also has an actual cage system on it just to help you lock down your foot in the shoe. And then on the back, there’s a heel counter to provide you with better heel lockdown.

The way that the Primeknit is set up on the UltraBoost makes it fit a little bit better for normal width and skinny feet as your feet won’t swim as much inside the shoe.

However, if you’re wide-footed or have high arches, the fit is going to be on the tighter side. So, you have to be aware of that.

On the NMD, basically your whole upper is Primeknit. Then Adidas went and structured the upper with some different pieces for the Adidas logos and also you have your three eyelets.

There’s kind of like a sock liner, which is only on the Primeknit version and then you have a heel tab and some structure in the back.

While the NMD is still an extremely comfortable shoe, people with skinny feet have so much movement and their feet are going to move so much in the shoe, which can be good and bad.

This is where it gets really annoying for Adidas fans. Although the NMDs and the UltraBoosts are made by the same company, they fit really different.

So, do the Adidas UltraBoost and the NMD fit true to size?

The bottom line is…

As far as sizing of the UltraBoost goes, you should go up half a size with the UltraBoost just because of the way the Primeknit is. Then on the NMD, you can either stay true to size or go a half size down.

With the Caged UltraBoost, if you tie the cage pretty tight, it can pinch against your foot. But it’s an amazing ride and you’re not going to have any complaints with the comfort.

But if you’re looking for the utmost amount of comfort, I’d go with the UltraBoost Uncaged. I would go at least a half size up with the Uncaged because the Primeknit does fit very tight just like the caged version.

Should Running Shoes Be A Size Bigger? Or, is Going Half Size Up Enough?

Are NMDs good for wide feet?

I have a wide foot and I’m size 11. A lot of people would say go up half a size or a full size if you’re wide-footed. But I went true to size in the NMDs and they fit fine to me.

There’s some room but the whole upper is almost like a sock and there’s no cage. So, to me, that’s a little bit more comfortable just staying true to size.

Are UltraBoosts good for wide feet?

If you have anything close to a wide foot, the Adidas UltraBoosts Caged and Uncaged are going to pinch on your foot and they’re going to be a little bit uncomfortable.

But if you go a half-size up, that should solve all your problems.

For me, as far as the upper materials go and how they fit, the NMD wins. It isn’t caged so it just feels like a sock and it’s a little bit more comfortable. You can wear it right out of the box and you’re good to go.

The UltraBoosts are tight on your foot and they’re almost uncomfortable when you first try them on, but I think the uncaged version feels a lot better.

But if you have skinny feet or if you want a snug fit and feel, the UltraBoost provides that better.

The way that I can describe it is if you’ve never worn a pair of UltraBoost and the NMD was your first pair of Boost, you’re going to be so happy with how the NMDs feel.

If you bought the UltraBoosts first and then you went to the NMDs, you’ll feel like the NMDs aren’t as near as comfortable.

Both the NMD and the UltraBoost obviously offer a Boost midsole, which is the main selling point of Adidas shoes. However, the Boost does feel slightly different in both shoes.

If you’re looking for the famous Boost feel with a little more firmness, the NMD is your pair. The NMDs are great for those of you who don’t like that much cushion and like a little firmness to their step.

But if you want a ton of Boost and for it to feel like you’re walking on a cloud all day, then the UltraBoost is what you want.

Overall, for the fit and the materials, the NMD wins, but for your comfort, it’s UltraBoost all day.

I don’t care if it’s a Jordan, Asics, or Puma, this Boost is the most comfortable midsole setup I have ever put on my feet.

The only issue I had with the NMDs as far as the midsole goes was this little plastic groove on the outside of the midsole (gray piece above). Because I’m wide-footed, it kind of rubbed up against the bottom of my foot and I took a little bit of getting used to it.

It isn’t something that’s going to turn me away from the NMD at all. It’s there and I feel it a bit because there’s no cage to hold your foot when your feet tend to roll in or out.

Maybe smaller and not as wide-foot guys won’t have that issue.

As far as the materials on the outsole, there’s a big major difference.

The NMD has a basic flat rubber outsole that’s going to be good for everyday activities, while the UltraBoost has a Continental rubber outsole, some little nubs, and a torsion system (red piece below) all of which are supposed to provide the traction and performance needed for running purposes.

Again, the NMD is just a lifestyle shoe to wear every day and go to the park or whatever you do while the UltraBoost is meant for running straight up.

You can wear the UltraBoost as a lifestyle if you want, but their premise was made for running.

This doesn’t mean the outsole of the NMDs is not comfortable. That just means that it isn’t as comfortable as the UltraBoost itself.

So, the outsole on the NMDs is it is what it is. It’s simple, but it’s actually more durable than the outsole of the UltraBoost because those rubber nubs tend to wear down after a while.

If you’re into running and want to stay with Adidas, we’ve reviewed some really good Adidas running shoes.

The overall comfort is the main factor when people are purchasing a Boost shoe.

This is my opinion on which Adidas looks the best.

Starting off with the Adidas UltraBoost Uncaged, this looks good, but it’s really hard to pull it off with anything but like shorts and a hoodie or something like that.

It’s just a very casual relaxed look that you can wear with tapered jeans except I much prefer the Caged UltraBoost for that.

So, as far as aesthetics go, the Adidas NMDs look great.

The Caged UltraBoosts look crazy good especially in a neutral colorway like the creams, the all-whites, the blacks, or the grays.

The Adidas NMD is cheaper than the UltraBoost. The NMD with the mesh upper retails for $130 while the Primeknit does retail for $170.

So, if you’re on a budget or if you’re looking bang for your buck, the NMDs are definitely the way to go. Also, the NMDs restock more frequently.

Both UltraBoost Caged and Uncaged retail for $180, but you can sometimes get them discounted.

I think everyone should have a pair of UltraBoost just to try out because it really is super comfortable.

If I could buy only one shoe, I would definitely get the UltraBoost Caged, but that’s completely up to you guys. So, if you could only buy one of them, which one would you buy?

That sort of goes over all the important points of the Adidas NMD vs Ultraboost that I think are worth noting.

If I missed anything, feel free to chime in in the comments section below just letting people know some other information you think they should know about these shoes.

Yeezy vs NMD R1 vs UltraBoost.