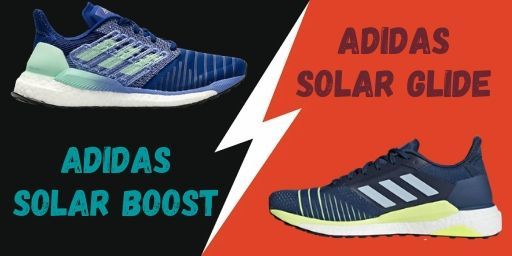 This is a comparison that will break down the similarities, the differences as well as why you should get one over the other depending on your lifestyle, fitness, and your budget.

If you’re in a hurry, Adidas Solar Boost vs Solar Glide:

The primary technology in the Solar Boost is Boost in the midfoot with a propulsion system, the special specific fiber placement with the embroidery for reinforcement in the midfoot, and Continental rubber with Flexible Stretchweb on the outsole.

With the Solar Glide, you get almost the full benefit of the Solar line because of the Solar propulsion system (the gray area just above the midsole), the Boost midsole, the Continental rubber outsole, and the Flexible Stretchweb on the bottom that gives you so much stability and support when you are running. I think these are the main selling points of the Solar line as a whole.

The upper does have a couple of differences in it. The main material is different.

The upper on the Solar Boost is a stretch mesh, but it has these heat-pressed kind of materials over the top of it with the fiber placement reinforcement in the midfoot.

The Solar Glide has basically a stretch mesh also, but it has these rails on the toe box where there’s less material. It seems a little bit more breathable overall.

The tongues, the linings, and the shoelaces of both shoes are also identical.

A lot of runners complain their feet feel loose because of the loose Primeknit material used on the upper of some other shoes.

With the Solar Boost, there’s no Primeknit on the upper. Instead, you have some sort of really tight material on the toe box.

So I guess your feet won’t feel loose on the Solar Boost than the UltraBoost for example.

Compared to the Solar Glide, the starting point of the lacing system is not that stretchable and not that flexible. So some people get a half size up and that pretty much fixes the discomfort you might have in that area.

Now what makes the Solar Glide a better lifestyle option compared to the Solar Boost is how breathable and flexible the upper is.

The flexible mesh on the Solar Glide has areas that actually allow for air to come in. Also, the starting point of the lacing system is a bit longer than the Solar Boost and has a little more give to it, which makes it easier for you to find your size.

So the Solar Glide is actually more comfortable on the upper part compared to the Solar Boost.

But one thing worth mentioning is the Solar Glide doesn’t offer the same kind of lockdown as the Solar Boost.

But don’t get me wrong. The upper on the Solar Glide still has much better lockdown compared to a lot of and stuff like that.

The Solar Boost gets a little warmer because of how snug the upper is. I think this can be some sort of a deal-breaker when it comes to looking for lifestyle athleisure shoes.

So if you live somewhere it gets really hot, the Solar Boost does get hotter and might feel really uncomfortable when running.

Having a look at the back part of the upper, both shoes have the identical same heel counter.

The heel counter connects at the bottom of both of the shoes and it is just simply a different color.

The sock liners are also identical with the same thickness that’s about five and a half millimeters thick. However, they do compress out quite quickly.

If we have a look at both Strobels, you’re going to notice a woven fabric that has holes in it. It’s the exact same pattern in both shoes and both are glued down.

If we take a look at the midsole of each shoe, they both feature identical Boost midsole cushioning material.

If we take a look at the outsoles of both of these shoes, they are identical in terms of the rubber. I could not find a difference in either shoe. They both have the Continental stretch web outsole.

Let’s take a look at the torsion system of the Solar Boost. This is our first difference between the two shoes.

On the Solar Boost, the torsion system is in orange. It comes down in the heel on the medial side.

In the forefoot, the torsion system extends on the medial and lateral sides of the forefoot as shown in the picture above.

Now if we look at the Solar Glide, there’s a very similar torsion system. It’s the mint green area. It comes down to the medial side of the heel but it does not extend into the midfoot at all.

So the torsion system does not extend up and that’s the first difference besides price that I’ve noticed between these two shoes.

The Flexible Stretchweb feature on the Solar Glide also gives your feet some guidance so that your feet won’t shift as much when you’re running compared to your typical UltraBoost. Yet, the Solar Glide should be slightly less stable than the Solar Boost.

Now if we have a look at the weight, this is where it’s usually easy to tell a difference between the shoes.

That’s not a ton of weight difference, but it is interesting because it does seem like the upper on the Solar Glide is a bit more simple and it has less torsion system in the bottom.

So where there’s less torsion, there’s more Boost and since Boost is pretty heavy, that’s why the Solar Glide weighs a little bit more.

Overall, a difference of 1.5oz isn’t that much and is not that noticeable.

From a construction and durability standpoint, the shoes are made very similarly.

The only durability concern I have is I only have about 40 miles on the Solar Boost and the midfoot area of rubber is already worn down to the web and the lugs are completely worn off.

So I do have durability concerns with the stretch web outsole on the Solar Boost, but otherwise, the rest of the shoes feel great.

I do feel like the Solar Boost and the Solar Glide fit true to size.

As far as the price, the Solar Glide is about $20 cheaper than the Solar Boost.

The Solar Glide is about $20 cheaper and if you have a little bit less money to spend I would buy the Solar Glide.

If you want a little bit of a cleaner look, I’d also buy the Solar Glide.

From a performance standpoint, if you need a little bit more stability, the Solar Boost might be your shoe, but again it’s kind of hard to tell the difference between the two.

The Glide is slightly more weight, but it’s a simpler and a cleaner look.

You can wear the Solar Glide every day, it doesn’t get warm, it’s comfortable, you can use it for your workouts and runs.

If you really want to get the better lockdown version, get the Solar Boost, the difference in price is really up to you.

If you really want to know which one I would recommend you get, well I think my vote goes for the Adidas Solar Glide. Why?

Just bear in mind that the most expensive shoe is not always the best product you can buy. It all boils down to matching the features that match your particular needs.

All right, that pretty much covers it for the Adidas Solar Boost vs. the Solar Glide. Let me know what you guys think in the comments.

Have you tried both shoes? What do you think?