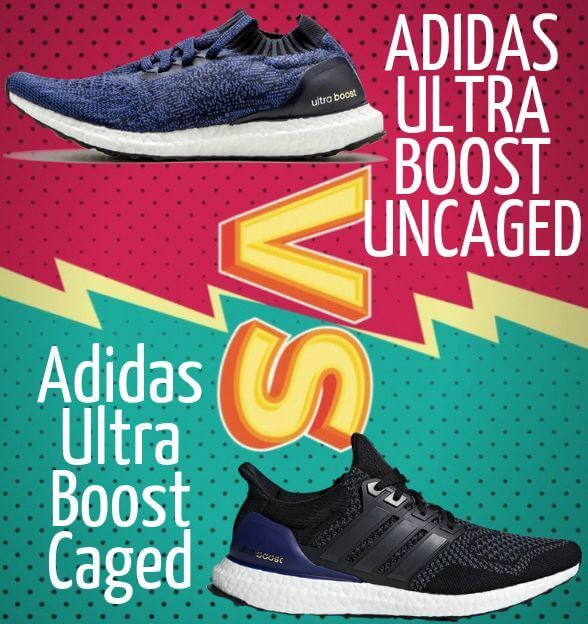 Today, I’ve got a very special comparison review between the Adidas Ultra Boost caged vs uncaged.

The Ultra Boost is one of the great athleisure sneakers featured in this article.

Starting things off with the most obvious difference between the two shoes, the Ultra Boost original has a cage and the new one is the uncaged edition, obviously.

Generally, the original Adidas Ultra Boost is cheaper than the uncaged version. Prices do change and you can check the prices here:

Although these shoes are the same silhouette, the Ultra Boost uncaged does fit a little bit tighter. The reason for that is because it doesn’t have the cage that sort of holds your foot in place.

I feel the laces on the uncaged version don’t really do anything. I mean you could argue that they do, but personally, this shoe is more of a slip-on.

Because of that, the shoe relies on the collar and that tighter Primeknit area to hold your foot in place.

Although the original caged Ultra Boost does fit like a glove in most cases and you could almost wear it unlaced, this cage does really help keep your foot in place if you need it.

My biggest gripe with the Ultra Boost uncaged is the collar. The reason I don’t like it is esthetically I do think it looks like a sock.

I don’t hate it though and I can live with it. Yet, comfort-wise I found the back part of the heel does kind of dig into your foot.

There’s a sort of ridge in the back of the heel which you don’t really notice when you first put the shoes on, but throughout the day it starts to rub against the back of your foot.

I’m hoping with wear that sort of dies down and maybe this gets a little looser. Anyway, that was my one problem with it.

The original Ultra Boost has a sock-like booty upper and the back part of the heel collar is kind of pulled away from your heel a bit so it doesn’t rub. Even if this area does rub, it’s so soft that you wouldn’t even feel it.

The heel counter externally is exactly the same. Yet, internally where it comes to the shoe actually touching your heel, the padding is slightly different.

The padding does seem to be slightly bigger on the Ultra Boost uncaged and that could just be because you don’t have that sort of heel tab that you have on the original Ultra Boost to keep your foot in place and also to give you that extra comfort.

It kind of feels the same to me, but you can sort of feel it with your fingers that it is slightly larger.

Moving down from the collar, both shoes have a primarily Primeknit upper. However, on the caged version, the Primeknit only comes to about the instep while the heel area isn’t Primeknit; it’s more of a mesh that’s padded.

This isn’t a huge deal because the mesh is really comfortable and is super breathable.

The way that the Ultra Boost uncaged is different is that the entire upper is made up of Primeknit.

The way they support your foot is they have that internal sort of plastic underlay situation going on which you can’t really feel when you’re wearing the shoe, but it does keep the Primeknit from being just a floppy sock.

Not only that but in order to hold the laces, the Ultra Boost uncaged has a  sort of plastic overlay around the lace eyelets. This keeps the laces from pulling through the Primeknit.

Again, it’s not a huge deal. You won’t feel it but that’s the way they solved the lacing problem that you have when they removed the cage.

Moving down the shoe, the Boost midsole is identical. It’s crazy, it’s super comfortable and I just love the Boost cushioning.

Moving to the outsole, the Ultra Boost uncaged outsole comes standard as a Continental outsole.

The original Ultra Boost has some versions that come as a Continental outsole like the 3M limited version, and then there are also other versions with the original outsole.

Both are fine. The Continental material lasts longer and grips a little bit better, but it’s not a huge deal.

These are both really great shoes. I don’t think you can go wrong with either one.

However, the caged Ultra Boost is definitely more performance-based and a lot of people use it for running.

The new Ultra Boost uncaged is more of a lifestyle silhouette.

You can read the Ultra Boost uncaged vs caged on reddit.