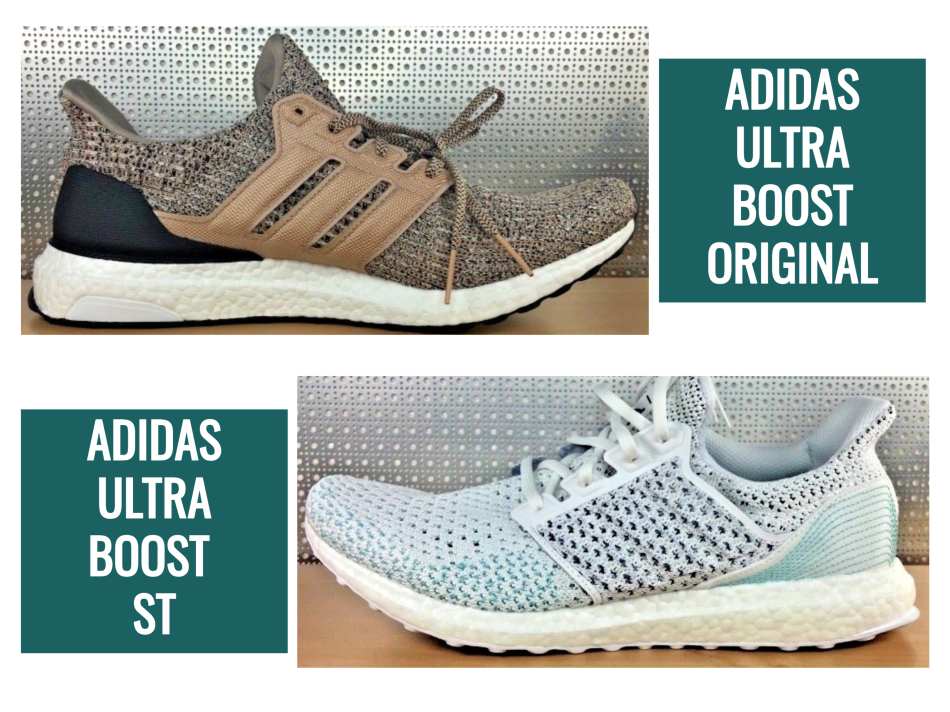 Just want to let you know that we recently did a comparison of .

You’ll also notice that the Ultra Boost is the original Ultra Boost. The main difference between the two is the Ultra Boost obviously has a bootie construction where you kind of just slip on the shoe.

The tongue is uniformed with the entire upper, so you kind of just slip your foot into and it grips around. It’s done very well and the design is very well done as well.

The downside for people like me personally is I don’t like it when it’s ultra snug around the collar. I want to be able to have my shoes feel like loose. That’s why I actually prefer the Adidas Pure Boost 2 over the Ultra Boost because of the tongue being loose around the collar.

The Pure Boost is also pretty light as well and I love the Boost material used. It’s not a running shoe but it’s a really comfortable shoe.

One of the things I don’t like about the ST though is I’m not a fan of the three stripes on the cage.

Right off the bat, you’ll notice the Original Ultra Boost is actually different in the design. If you look closer at the midsole, the Ultra Boost has one straight line all the way down and the ST has like three lines. The lines of the ST midsole are a little bit contoured and they kind of peak a little bit.

I’m not sure why Adidas did that but it looks like there’s more Boost material on the ST and it sticks out a little bit further.

If you look on the outer side of the back part of the midsole, the Boost on the ST looks thicker and that’s why I feel like there’s more Boost material on the ST version.

As you can see on the picture, the Ultra Boost has a little plastic nimb and the ST has a rubber plate. The rubber addition reads “Energized stability” and I think it’s designed to provide more stability and support for those who supinate (ankles roll outward) when walking or people with flat feet.

I personally think the back tab was horribly changed. I believe it’s reflective but it’s not just aesthetically pleasing.

Different from the Ultra Boost, Adidas put a rubberized guard on the toe box of the ST. This is a good addition and would probably help the toe box last longer. Also, the ST has a little bit of added reinforcement.

Aesthetically, the ST is not as pleasing as the original Ultra Boost just by looking at it.

The last thing I want to point out is the outsole.

Both shoes feature the durable Continental rubber outsole. The traction provided by the two outsoles is totally different.

The regular Ultra Boost has kind of sticky nubs that stick out whereas the ST has flattened versions of them. However, a lot of straight-up runners complain about these nubs wearing off too fast. So maybe flattening them out on the ST was a good adjustment.

Again, visually, the ST loses but I think that for comfort-wise, I do like the ST though.

You might also like:Nike Odyssey React vs Nike Epic React.

So the Adidas Ultra Boost ST Parley actually might be my favorite pair of Adidas Boost sneakers to release.

Let’s find out why…

I’ve been waiting for a good colorway and the right price point for myself. So I finally pulled the trigger on the Parley Ultra Boost ST.

I love this colorway and I think Adidas did a really nice job on this one. This model might not be for everybody and aesthetically, it’s a lot chunkier than the Ultra Boost but I actually like the overall comfort and the cushioning.

It just fits my foot better, but I definitely recommend you go and try on your own pair. I go true to size so 9.5 fits me perfectly, which is exactly the same size that I am with the Ultra Boost.

The overall traction pattern on the newer version looks exactly the same as the previous version.

Looking over the midsoles side by side, they do appear exactly the same. They have the same lines and the back section of both shoes have actually two layers of Boost material.

They also have the same stability plate that reads “Energized stability”. So the “ST” actually means “Stability”.

The toe box pattern and the lockdown are pretty much the same on both models.

The Parley has recycled plastic on the heel counter and that is definitely the biggest change on the Parley. It doesn’t say Ultra Boost on the heel cup, though.

All in all, it’s pretty much the same shoe with a couple little minor updates.

Compared to the original Ultra Boost, the ST just fits better for those people that have wider feet and need some extra support.

I really do like what Adidas has done with the Parley movement with the recycled ocean materials. I think it’s a cool addition to their product lines.

I also like the overall color schemes and I just dig the greys and the blues. I think that the Parley is the most comfortable Adidas Boost shoes on the market and I know it’s not a popular opinion because they’re not as stylish as some of the other ones.

Is the Adidas UltraBoost 4.0 a reinvention of the great silhouette or just more of the same?

Every year Adidas brings out a new iteration of their marquee silhouette, the Ultra Boost.

For the last two or three years, the Ultra Boost has been one of the most popular silhouettes on the market. In fact, it couldn’t even stay on shelves and when it came to limited releases or consortium collaborations, you could forget about getting a pair.

But soon after that, the hype behind the Ultra Boost died a little bit. But I don’t think sales of the Ultra Boost have changed, I just think there’s more supply to meet the demand.

Right off the bat, I’m sure you can tell that the 4.0 looks very similar to the Adidas Ultra Boost 3.0.

Starting off with this shoe, the entire upper is covered in very stretchy primeknit. The main difference between the 4.0 and the 3.0 is the primeknit pattern. The 3.0 had somewhat of an abstract linear pattern whereas the linear texture on the 4.0 is much more even and defined.

One thing you may have noticed on the 4.0 is that they brought back the ventilation holes on the toe box.

The cool part about that is that the pattern the ventilation holes create is very similar to what you found on the Ultra Boost 1.0, which is most people’s most favorite primeknit pattern.

It’s kind of difficult to see because the primeknit is all one tone this time around whereas the last couple models had a couple subtle variations in color. But if you look closer enough, you’ll recognize that primeknit 1.0 arrow pattern.

As for the feel of the 4.0 primeknit, it feels almost identical to the 3.0 both on feet and to the touch. It’s got the same amount of elasticity and it’s about the same thickness.

Other than the primeknit pattern itself, there really isn’t any major difference.

Moving back on the shoe, the Ultra Boost 4.0 seems to continue the draw on its roots with a solid opaque cage vs last year’s semi-translucent cage.

I really prefer the solid color cage because I feel last year’s 3.0’s translucent cage kind of seemed a little bit messy at times. On the black pair, in particular, I felt like the cage had a sort of brownish yellowish tint whereas the primeknit had more of a bluish tint.

I didn’t think those two colors worked too well together, so I’m glad they want back to the same simple solid color cage.

As for the construction of the cage, it’s exactly the same as in previous years.

You’ve got your familiar flat Ultra Boost laces with some speckling of lighter grey. On the top of the tongue, you’ve got the Adidas branded 3M tag.

Inside the shoe, nothing’s really changed. You’ve got the same sock liner material and the same amount of padding.

The only real difference between the 4.0 and the 3.0 inside the shoe is they changed the text on the insole. The insole inside the 3.0 said “Ultra Boost, endless energy, blah, blah “, but on the 4.0, it just says “Boost” in a sort of weird bubbly font. I’m not sure why they did that…

As for fit, the Ultra Boost 4.0 fits almost identically to the 3.0 and for me, that’s true to size.

The heel counter is pretty much the exact same thing as all the previous Ultra Boost. This time, it’s in grey to match the rest of the upper. And of course, you’ve got your Ultra Boost branding on the lateral side and in silver.

Moving down on the shoe, you’ve got your standard Ultra Boost midsole which is never really changed. But if it’s broken, don’t fix it. I think it’s probably one of the most comfortable midsoles I’ve ever worn.

Moving to the bottom of the Adidas Ultra Boost 4.0, you’ve got a webbed outsole and continental rubber.

Overall, the 4.0 is only a very slight upgrade from the Ultra Boost 3.0.

I’m glad that they didn’t mess with this shoe too much. I honestly don’t even think it needed an upgraded upper, but I don’t actually mind the changes that they did make.