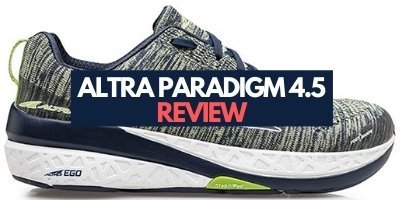 Before we start, here’s our review of the Altra Paradigm 4.0.

It has an 0mm offset from heel to toe, which is pretty standard for Altra. All Altras are known for having that zero-drop feature because the company loves that natural running experience.

Along with those same lines, Altra also loves that wider toe box which makes for the ability to allow those toes and that forefoot to really spread.

The stack height from the heel to the forefoot is 31 millimeters giving the shoe a pretty good amount of cushion underfoot.

The Paradigm 4.5 is a stability shoe and it’s got the GuideRails support system along the inside. The shoe also has a technology called Stabilipods which are extra dense areas of what feels like plastic that prevent you from rolling inward toward the inside of the foot.

What’s also a little bit less apparent is the fact that the midsole actually flares out toward the inside giving an even wider base for you to land on.

The Paradigm 4.5 weighs in at ten and a half ounces for men’s size 9. This is pretty standard for a bigger kind of heftier stability shoe.

Let’s talk about how I’ve been using the Paradigm 4.5.

Basically, I’ve used this shoe for every single run in the last two months. All 250 miles that I have run have been in this shoe. Because of that, I’ve really tested the Paradigm out at all paces and all distances and really given it a good rundown of what it can handle and what it can’t.

So, here’s the deal on the wear and tear of the Paradigm 4.5.

The upper is this knit material that almost seems indestructible. At 250 miles, I don’t see any pulling away from the midsole. I don’t see any kind of fraying or anything like that, which is pretty surprising considering I tend to clip the inside of my ankle quite a bit.

Again, it’s not starting to fray or do anything that indicates that this is not going to last me for the life of the shoe.

So what about that midsole?

That 31-millimeter of stack height is really quite cushy and that’s one reason that I got this shoe when I tried it on. I wanted to make sure that I had something that had a little bit of extra cush to it because I wanted to take this for longer runs.

For me, a long run is about 9 miles to maybe up to 12 miles. I think the Paradigm 4.5 could take you that kind of a distance, but the longest I’ve run in it is about 9 miles, so that’s kind of where I’m coming from whenever I talk about the durability of this shoe.

This midsole has really been a dream. It is really cushy when I got it in the store and it has really stayed that way pretty much for the entire 250 miles that I’ve been running in it.

It’s been really hard for me to distinguish whether it’s really lost any of that cushioning because when I put it on in the morning whenever I get ready to go for my run, I stand on it and I feel that cush. I feel that little bit of bounce in it and it really feels pretty much the same as when I got it in the store.

I always land on the outside of my foot and this is where I see most of my wear and tear. However, I’m starting to see a lot more wear in other places too and I’m wondering if this is really going to get me to 300 to 500 miles.

I don’t think it’s going to, but that’s because I land excessively on the outer side of the outsole.

I’ve been doing pretty much anything from 9-mile slow runs, 10.5-minute pace to speed workouts at five-minute pace. So, I’ve really been putting a lot of stress on this shoe and maybe it’s not a fair assessment, but I still feel like at 250 miles I shouldn’t see quite this much.

Now here’s where I think that it might differ for you. I am definitely a forefoot striker so I put pretty much all of my stress through the front area of the shoe.

If you’re more of a midfoot striker, then the forefoot area will probably be saved a little bit more and you may be able to take it 400 or 500 miles or more.

Who is it for?

So, what do I think that this shoe is best for?

I think this is good for really long and slower kind of runs. It’s a stability shoe and it’s on the heavy side. It’s not exactly meant for speed, but as I said, I wanted to really put this thing through different paces and see what it could handle.

If you need a little bit of stability, could  you take the Paradigm 4.5 a little bit faster than those long slow distance runs? Sure you could, but I just don’t think that it’s going to perform well.

I’m planning on doing another kind of a more daily trainer to get into those slightly faster runs. This shoe was great for 9-minute pace and above, but whenever I start dropping below 9 minutes getting down in 8 to 7:30, that’s when I know I need a little bit more of a lighter shoe and a little bit more of lockdown in the forefoot.

This Paradigm 4.5 with its wide forefoot is great for recovery days, but if you’re ever wanting to pick up the pace a little bit, I feel like I start to slip around in the forefoot a little bit.

Even when I’m going pretty fast, I don’t feel like I’m sliding around in the heel at all and I feel pretty locked down in the midfoot.

Another thing to consider though is you have to make sure that you can tolerate the zero-drop feature. Altra is known for that zero drop because they want you to be able to run with a more natural running pattern.

But if you are used to running in a higher-drop shoe, then you really have to consider whether or not you are ready for a shoe that drops you all the way down to zero.

If you are, then you might want to make sure that you are at least starting with just a few miles in this shoe and then gradually work up to running longer and longer distances. So make sure that you’re considering that zero drop whenever you’re getting this shoe.

I think the Altra Paradigm 4.5 is a really great stability shoe used for longer slower runs. I think that you can take this buddy to a half-marathon distance or even longer if you’re wanting to, but for me, I tested it out and I think where I feel most comfortable is longer slower 9-minute pace for and above.

So that pretty much wraps this Altra Paradigm 4.5 review. So thanks for making it to the bottom of this article. I hope you liked the Altra Paradigm 4.5. It’s a good shoe for long slow distances and it’s a great option if you can handle that zero-millimeter drop.

So let me know in the comments down below. Have you tried the Altra Paradigm 4.5? Have you liked it?