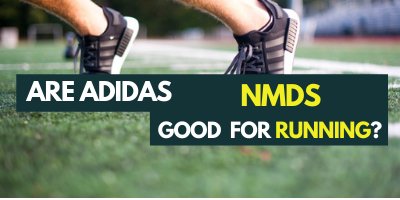 Are NMDs good for running?

I think there’s a misconception of what a running shoe is and what it is not. So, the terms that people throw around are running shoes and runners.

The term “runner” is a very loose term and people use it in different ways. But the majority of times a runner is a shoe that is inspired by a running shoe style but into a casual lifestyle shoe.

A running shoe is something that you can run in. The intention and the design are meant for running. Some running shoes do look good to wear casually, which is totally fine.

The Adidas NMDs are not running shoes. This is a good example of what a runner is. The silhouette is meant to be sleek and have that runner design, but it’s not designed for running.

There’s no support and the traction underfoot is not meant for anything serious. You can run around the city in the NMDs and go shopping with your friends, but, again, it’s not meant for running.

With all that said, if you have it in your heart and the desire to run in a lifestyle shoe like the NMDs, that is fine. You have the freedom to run in whatever shoe you ever want to run in.

The problem is if you use the NMDs to do some serious running, you’ll end up hurting yourself because they lack the support, cushioning, and protection running shoes have.

Overall, the Adidas NMD is such a unique model because, unlike the UltraBoost, this is actually a pure lifestyle shoe.

The NMD is for a consumer that just buys sneakers for casual consumption and not necessarily for running and performance.

Last but not least…

Related: Can you run in Allbirds shoes?

NMDs vs UltraBoosts vs EQT vs Roshe

Are Adidas UltraBoosts good for running?

It just so happened that Kanye wore it and everyone followed along and started wearing it casually, too, which, again, is fine.

It’s a comfortable shoe. You can wear it however you want but it is still a running shoe.

The Nike Roshe One is another example of what a runner is. It’s a running-inspired silhouette of a running shoe but into a lifestyle.

The support in this shoe is not meant for any kind of real running. It’s meant for casual, moving around the city, looking cooler with your joggers and your skinny jeans.

Overall, I just think it’s kind of scary that so many people really think the Roshe One is a running shoe and they’ll buy it for running purposes.

This is a cool shoe and looks very similar to a running shoe like the UltraBoost, but it is a runner and it’s not meant for running. It’s meant for casual use.

The traction is flat. It’s very comfortable thanks to the amount of Boost in it. It feels great, but what it is what it is. It’s a cool-looking lifestyle shoe.

If you check the Adidas website, the EQT is under the lifestyle casual category, whereas the UltraBoost is in the running category.

If you’re looking for some lifestyle shoes that you can use for performance, make sure you check these athleisure shoes.

The shoe has to be breathable. Whether it’s knit, engineered mesh, or whatever they come up with, the upper has to offer some decent breathability.

The heel counter has to offer some support as well.

The shoe has to offer some support. Neutral running shoes have little support and are more flexible compared to overpronation shoes or motion control running shoes which are less flexible and more rigid.

Note that some running shoes offer no support whatsoever and that’s because they’re designed to be super lightweight for race day purposes.

This is the part that separates running shoes from lifestyle shoes. Running shoe companies are competing to make their midsoles material cushy, poppy, supportive, stiff, max cushion, spongy, etc. depending on the purpose of the shoe.

Some newer running shoes offer some sort of energy return and others have carbon fiber plates or nylon plates built-in.

Real running shoes have outsoles that are durable, supportive, protective, and grippy over different surfaces.

Depending on the shoe, you’ll get carbon rubber, blown rubber, crystal rubber all over, or just on the back or front for durability for the roads.

In this section, I want to talk about 8 things you need to know before you add NMDs or UltraBoosts to your wardrobe.

Both the NMDs and UltraBoosts come with a mesh and a Primeknit upper and a Boost midsole.

The NMDs are urban lifestyle shoes, whereas the UltraBoost is a running shoe because the Boost in it has a more responsive cushion and it’s more geared toward performance.

The Primeknit upper on the UltraBoost is a little more flexible and a little tighter on the foot giving the shoe that sock-like feel that they talk a lot about.

The Adidas NMDs fit like a sock but they’re not as tight as an UltraBoost.

The laces on the NMDs are long. So, just keep that in mind when you get this shoe.

For starters, both shoes look good. These shoes are hard to get and you can’t just go to your local mall and buy them.

You most likely have to buy them online and buy a few pairs to see if they fit right.

Another thing, Kanye West is pretty responsible for this. He came over from Nike and started designing shoes for Adidas. Since then, sales have been rising and the demand is good.

So, Kanye is definitely responsible for the rise of these whether you like him or not.

As I said earlier, these shoes are hard to get a hold of. You’re not going to be able to just go into a mall, buy them, and try them.

You can go to your standard shoe stores like Foot Locker, Finish Line, Champs, or Adidas. However, if you want to get them, you missed a release, or you’re looking for some limited colorways and collabs, you need to buy them online.

If you’re going to switch over from Nike to Adidas, you have to take into consideration that it could be half a size smaller or half a size larger. Just be careful when you’re doing that.

Also, because the NMD has that sock-like feel, I’m not sure but if you have flat feet, narrow feet, or wide feet, it may not be comfortable for you.

The NMDs run about $130 and the UltraBoost run about $180. However, if you buy from any of those online boutiques or if there are limited colors that are launched, they can range to well over $200.

Is it worth 130 or $180 to buy these shoes? Well, I think it depends on what you value in sneakers. So, if you want to wear it to the gym and be casual, I think they’re good to have.

If you want to actually do performance and start running in them, then the UltraBoost is a better option.

Which shoes do I prefer between the NMDs and the UltraBoosts?

The cushion is really soft and it goes well with the stuff I wear. They may be getting me on that $180 price, but I actually do prefer how this fits, feels, and looks on my foot.

In terms of the NMDs, it’s a good-looking shoe and there’s nothing wrong with it. It is still a good well-designed shoe that is well-priced and has a lot of cool colors. So, no real knock on it, but I just prefer the UltraBoost.

That’s it for today. So, are NMDs good for running? Now you have the answer and you can sleep well today 🙂