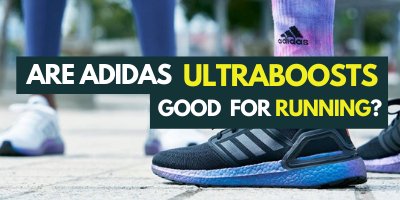 Are Ultraboosts good for running? This is a question that nearly every person who wears Adidas UltraBoost for lifestyle asks.

Well, in today’s article, I’m going to answer this question, compare the Adidas UltraBoost 20 to the UltraBoost 19, and tell you which shoe is a more runnable UltraBoost.

Let’s get into it…

Are Ultraboosts Good For Running? Yes or No

If you’re looking for a quick answer, then yes. The Adidas Ultraboost is good for running, especially the UltraBoost 20.

The UltraBoost 20 is probably the most runnable UltraBoost shoe that I have ever experienced.

I’ve been fighting guys in the running forums for the past several years about whether the Adidas UltraBoost is or isn’t a running shoe. I’ve always thought that it is a running shoe.

What it felt like to run in the UltraBoost 20 was that it finally felt like there was the right amount of Boost for an Adidas running shoe.

I still wish that there was a little bit more Boost in the midsole, which is something that I wanted in the UltraBoost 19, but I felt like there was the right amount for an UltraBoost of Boost in the heel in this shoe.

It just felt just like one good shoe that I could just actually run in.

Also, the upper is designed to make the UltraBoost 20 a more RUNNABLE shoe rather than necessarily a fashion shoe or a casual shoe.

The UltraBoost 20 feels really nice. It’s a little bit more relaxed, a little bit longer miles, a little bit just cruise control type of speed is what this shoe seems to be wanting to do.

Again, this UltraBoost was actually a pleasure to run and I totally wasn’t expecting that. I was expecting to be a little bit annoyed by it, maybe even a little bit bored by it, but by the end of the run, I was sure they finally made this a real running shoe.

Now that I have answered your question. Let’s dive into more details about the Adidas UltraBoost 20 and the UltraBoost 19.

Related: Adidas Ultra Boost Caged vs Uncaged Side By Side Comparison

I really wasn’t all that excited about the Adidas UltraBoost 20. I think it looks fantastic, but it just seemed so much identical to the UltraBoost 19.

I really felt like it was just a kind of a revamp of the upper and that’s it and it was basically the same midsole that I really wasn’t all that excited about in the UltraBoost 19.

But with some changes to my training schedule with the races canceled or postponed, I needed more like daily trainers and longer mileage shoes.

I thought this is a good time to take a look at this UltraBoost 20. To my surprise, this shoe actually ends up being really good.

This is my third or fourth UltraBoost shoe, but I ended up actually really enjoying this.

Related: Can You Prevent A Side Stitch?

I think the midsole is the biggest thing that I need to address first.

The midsole looks a lot like the old UltraBoost 19 midsole. Even holding them side to side, they kind of look almost the same.

However, there are some subtle but very important differences.

So, Adidas shaved off 7 millimeters of Boost from the midsole. The stack height went from 29 millimeters to 22 in the heel and then from 19 to 12 millimeters in the forefoot. Again, another 7 millimeters.

It’s still a 10-millimeter heel-to-toe drop shoe and it lost overall only 0.1 of an ounce, but I think it’s because it added a lot of weight in the upper.

But what’s important for runners is the running dynamic seems to change quite a bit even though the heel drop remains at 10 millimeters.

We’re still seeing Primeknit, which is nice and comfortable up in the forefoot. There’s a bootie construction in terms of there’s no tongue.

It’s really just all part of one Primeknit upper with lots of extra stitching all the way around the toe cap, which reminds me very much of the SolarBoost.

Then, as we come to the midfoot cage, we’ve got something that’s a little bit more substantial like the UltraBoost 19.

Related: Can you run in Allbirds shoes?

And then as we come back to the heel, we’ve got a lot of padding back there, which is something that I’ve never asked for or needed in an UltraBoost shoe.

I suspect though all the stuff that’s going on the back isn’t just about padding. I think it’s also about a little bit more lockdown in the heel.

I just feel like this plastic heel cup area is a little bit more substantial than what we saw in the UltraBoost 19 and it’s very soft to the touch. It almost feels a lot like neoprene.

In all, the upper looks like it were sliced right off of the SolarBoost 19 which is a shoe that I generally liked and they put it on this UltraBoost midsole, which ends up being like a weird shoe that kind of works somehow.

But with this UltraBoost 20 being the most runnable UltraBoost ever, is it still an UltraBoost?

I’m not really sure about that.

It has so many similarities to the SolarBoost. I don’t know if that’s just a kind of convergent evolution or just like giving up by the Adidas designers and engineers trying to figure out how to make an UltraBoost runnable.

Maybe they found out that the SolarBoost is a shoe that people like to run in and no one makes fun of that shoe for not really being a running shoe.

Or, is it that as you tweak it more and more to make it less like a casual shoe or more like a running shoe, you’re ending up with the same formula that the SolarBoost ha? I’m not sure.

Related: Can you really run in Nike Air Max?

Is The UltraBoost Still A Max Cushion Shoe?

What I can say is that I don’t really feel like this is a max cushioned shoe anymore. At best, it’s in that kind of new category of max cushion shoes. Max cushion shoes are daily trainers or trainers that have a little bit more cushion in them.

It has the weight of a max cushion shoe at almost 11 ounces for its listed weight, but I don’t really get the sense that this is a shoe that’s really designed for those recovery runs or those long runs where you really need some extra plushness and a little bit of extra forgiveness on your joints and on your muscles.

Ultimately, I think that this is a pretty exciting shoe because I really am going to enjoy putting lots of regular easy-paced miles on it and medium-paced miles on it, but I also think it’s a shoe in identity crisis at this point.

Related: How To Build Endurance For Long Distance Running

I hope I was able to answer your question “are Ultraboosts good for running?”

If you have any questions about the UltraBoost 20 or comparing it to the UltraBoost 19 feel free to leave them down in the comments down below. I’d love to talk to you guys about it more down there.

Thank you so much for making it all the way to the end of this article and I will see on the next one.