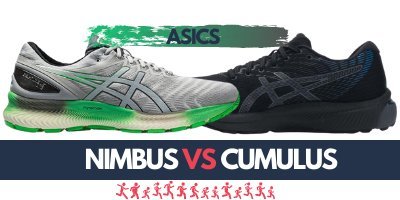 Specifically, we’re going to be looking at the Asics Cumulus 22 vs Nimbus Lite.

I’ve had these two shoes for a lot of time so I figured it would be better than separate reviews at this time.

The 22nd iteration of the Cumulus is a total redesign from the Cumulus franchise and it’s reduced in weight substantially.

The Nimbus Lite is a new franchise extension of the Nimbus series. Basically, Asics has taken the philosophy of the Nimbus and applied it in a little bit new spin.

Both the Nimbus Lite and the Cumulus 22 are daily trainers without all of the bulk and the plastic that standard Asics shoes tend to have.

We’re going to be talking about the specs, the upper, the midsole, and the outsole so you can decide which you would want to buy.

Ultimately, I’ll tell you which shoes I lean more to.

So let’s go over the specs…

Overall, the Nimbus Lite is of course lighter than the traditional Nimbus. It’s a little bit more deformable in terms of the cushioning system.

The Asics Cumulus 22 is the lightest softest Cumulus we’ve had to date. I believe the Cumulus 22 has been working out and actually shed about a pound over the previous Cumulus 21.

The Nimbus Lite has a hefty 13-mm drop on the women’s version and 10mm on the men’s whereas the Cumulus 22 has a 10-mm on both men’s and women’s versions.

For me, both the Nimbus Lite and the Cumulus 22 fit true to size.

We’ve recently done an article about “Do Asics run small or true to size?” Make sure you check that out.

The Nimbus Lite’s upper is made of pretty much all-recycled content monofilament engineered mesh material. It’s a soft mesh, and for Asics’ standards, it’s simple and lightweight.

The heel counter is sturdy and holds the foot in place, but there’s no pull tab at all. The tongue is cushioned but not overly so and the laces are soft and round and stay tied, most importantly.

The toe box is also nice and roomy, which is great because I think it could accommodate a lot of different foot types.

I really don’t have anything to complain about the Nimbus’ upper except for maybe no pull tab.

On the upper, we have a totally new jacquard mesh upper that really wraps the foot really well with 3D-printed strategic overlays through the midfoot.

This upper is a little more heavy-duty than the Nimbus Lite and it’s a little thicker and a little bit softer.

The tongue is padded a tiny bit more than the Nimbus Lite and the laces are actually flat and thinner on the Cumulus 22.

One thing they both have in common is there’s no pull tab.

Like the Nimbus Lite, the upper on the Cumulus 22 gives me a good a locked down fit.

One other thing I will say about the Cumulus 22 is that it’s a little bit more shallow than the Nimbus Lite. The Nimbus has a little more volume for a thicker foot and the Cumulus kind of dips down on the toe box and hugs your foot a little bit closer.

Underfoot, the Asics Cumulus 22 has a new molded sock liner with exceptional Ortholite lasting to give a really great initial step-in comfort.

So, which upper would I choose?

Well, I think I’d go with the Nimbus Lite. I like how it’s a little more breathable, the toe box is wider, there’s a little more room and volume for your foot if you’re wearing a thicker sock.

However, the upper on the Cumulus 22 really hugs your foot close.

Both the Asics Nimbus and the Cumulus use FlyteFoam, both have GEL some really nice visible GEL in the heel with forefoot-encapsulated GEL underneath the first metatarsal head.

The Asics Nimbus Lite is using an eco-content FlyteFoam in the midsole. It’s also a single-piece and there’s less glue and adhesive.

According to Asics, this allows them to be more ecologically-minded in the construction and development of this product.

So, a theme with the Nimbus Lite is kind of thinking green. It’s supposed to be made of recycled materials and it’s just supposed to be more of an eco-friendly shoe, which is great.

The Nimbus Lite is using a full-length FlyteFoam material in the midsole, but there’s a little more to it than usual.

The Nimbus Lite also incorporates Cellulose Nanofiber, which according to Asics, is a sustainable material that also increases the durability of the foam.

Out of all the easy shoes that I have tried and I’ve tried a good amount of them recently, this midsole is my favorite by a long shot.

The FlyteFoam just feels so different and I don’t know if that’s because of this Cellulose Nanofiber stuff or if it’s where the GEL is positioned.

But it is a soft pillowy amazing ride. Not only is it soft, not only is it super-comfortable, but it’s also responsive and kind of bouncy.

I do think the Nimbus Lite is a really versatile shoe because of the midsole.

Although it’s not made for faster workouts, you can still do that. You could also take it on longer-distance days for your daily training because of how soft and protective it is.

I also think that you will be able to get just as many miles out of the Nimbus Lite as you can in the Nimbus 22.

It seems just as durable to me and it’s for a lower price point and it’s kind of a better shoe.

When I say firm, I don’t want you to think it’s like a rock under your foot and it’s going to be a really harsh ride.

The Cumulus is a durable shoe and it’s versatile as well. Because of how firm it is, it can definitely hold up on those tempo days and it has some balance and some response so it can definitely go long as well.

If we’re comparing the two midsoles, I think it really just depends on personal preference. Do you like the softer plush sort of max cushion vibe of the Nimbus? Or, do you like the more standard firmer and a little more responsive kind of ride of the Cumulus?

I like a more max cushion plush feel underfoot. Whether it’s daily training, long miles; or even tempo pace, I like a softer shoe.

So for me, it’s the Nimbus Lite.

The Nimbus Lite and the Cumulus 22 both use Asics High Abrasion Rubber (AHAR) and both have a nice full-ground contact outsole with really nice strategic flex grooves through the forefoot.

It’s super long-lasting and offers great traction no matter what kind of terrain you’re on. I really can’t pick which is better than the other because they’re both really good.

All right, so what shoe would I pick?

I guess at this point it’s kind of obvious. But for me, I would go with the Nimbus Lite over and over again.

… you just can’t go wrong with this shoe.

The major selling point for me is the midsole. Honestly, I really think that’s going to be your deciding factor when it comes to choosing one of these shoes.

Again, do you like a softer ride (Nimbus) or do you like a more responsive firm ride (Cumulus)? Neither one is wrong; it’s just personal preference.

As you know, prices go down over time and I can’t tell you how much these shoes will cost you today.

However, you can get the Cumulus 22 for about $30 cheaper than the Nimbus Lite, which is something you may want to consider if you’re on a budget.

So there you have it. This kind of concludes Asics Nimbus vs Cumulus comparison. I hope I was able to make the picture as clear in your mind as possible.

So, are you team Nimbus Lite or team Cumulus 22? Either way, you really can’t go wrong. Both are really solid shoes from a great brand, Asics.

Let us know what you think in the comments section below.