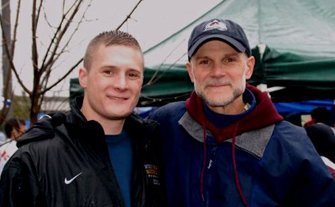 Syracuse, NY is the haven for one of the nations greatest high school girls cross country programs.

Fayetteville-Manlius girls have won 7 straight national championships from 2006 to 2012 and in 2013 they finished 2nd.

With the success of the program, coaches Bill and John Aris decided to start a racing team for post collegiate athletes called Stotan Racing in 2010.

I had the opportunity to interview John, who is primarily coaching the Stotan team, to get to know him, his team, and how he coaches.

I believe he provides great value on training philosophy and the focus of an adult athlete.

He speaks directly to the importance of priorities and mindset of the adult athlete and how that should affect their training and success.

Here Is What He Had To Say:

John, tell me a little bit about yourself?

I am a 34 year old father and husband…my most significant role in life, and the one of which I am most proud.

For me, there are no greater achievements than in the that of my son, and in building a future with my wife, Holly.

Guiding distance runners to achieve excellence is a passion of mine, and perhaps the one ‘extracurricular activity’ I have time to enjoy, if you will.

As a career, I am a Project Manager for a national design-build general contractor, based in Syracuse, NY.

How long have you been involved in running?

My earliest memories of involvement as a runner stem back to five, maybe six years old.

My father would take me down to the Westhill HS track (cinder at that time) in the City of Syracuse, as he would prepare for his marathons.  I would run on the infield as he ran his mile reps.

Running was without question, our greatest mutual passion between father and son.

To me, the Marathon was the greatest race known to man…nothing more inspiring than watching an Olympic Marathon race with my father.  Could bring me to tears…watching the pain endured to grit out a marathon win.

I ran road races from a very early age, set a few age group records (including a national record for 15K when I was 11!).

I was the captain of my high school XC and Track teams at FM  (where I would one day start my coaching career as my father’s assistant).

I took some time off from running after HS, and did not return to it until 2004, when I began coaching with my father, back at FM (between 2004>2010).  My father and I founded Stotan Racing in 2010, and since then, this has been my sole coaching endeavor.

Explain for us what Stotan means?

The word Stotan is a hybrid of the words STOic, and sparTAN.  STO-TAN.  This name was originally coined in the 1950’s by legendary coach, Percy Cerutty, who coached the great Herb Elliot to the Olympic 1500M Gold in 1960, in World record time.

What was your goal for creating Stotan racing?

Whether FM graduates returning from college, SU graduates, runners from other post college programs, or local runners who aspire to achieve their own greatness…the goal is and always has been, to produce excellence.  First and foremost.

That goal has no limitation.

Of course, we would like to be developing athletes for the Olympic Games!  So far, we’ve achieved the US Trials, the World Championships, and US Championships.

What is your training philosophy?

In my opinion it is simple…as it applies to the distance races, to be fast, you must first be strong.  You must always touch on speed, no matter what your focus.

We train on hills, work in the gym, run in muck, run in blizzards, run long, run short, run fast, run slow.  We are creative.

In general, the important factors are to simplify your life, train hard, train smart, listen to your body, respect recovery, have confidence in yourself, and perfect your process.

As a coach, what are some things you see runners struggling the most with?

Simplification of Life…seeing this as a direct path to success.

Toughness…this is often times innate to the person.  But it can be honed!

Confidence… in ones ability to perform at a higher level, in training and in competition…to take on more than they have previously…to accomplish work that seems impossible at times.

Identity….  At the age of 23>30…people want something more to life than success in running.  And they damn well should!!!  How trivial is our existence if we focus SOLELY on athletics?

We try to provide a program environment which is conducive to development in all areas of life.  We encourage the advancement of careers, degrees, families.  It takes a unique individual, however, to balance it all…and perform at ones best in running.  The best runners I have coached have part or full time careers, have/had been with the program for a number of years, have/had seen consistent improvement over the long haul.

You said one of your goals for you adult athletes is to simplify their life so they can train. Can you explain some ways in which you do this?

It isn’t that I am the one to ‘simplify their lives so they can train’.  That was unclear.

Truly, simplification of life is a complete responsibility of the athlete, in mind and in practice.  It must come from the athlete, perhaps recommended by the coach, but often recognized by the athlete as a way to achieve higher levels of greatness.

It must come from within.

I find that the most successful runners find simplicity in the following ways…First, they live an ascetic life.  Their process is entirely excellence driven.  They abstain from indulgence, they practice patience, they are disciplined in all ways.

Their priorities fall in a hierarchy of Faith, Family, Work/School, and Running…in that order.  They make a choice to value training as a way of life, rather than a hobby.

They practice regular schedules, and have career or education paths, which agree with training.  They are in bed early when they don’t have to be, are up early because they have the opportunity to start into their training sooner…allowing themselves more recovery between sessions, resting as often as they can.

They are constantly preserving their bodies, and their minds, for the training to come.  That’s not to say they are hermits…but they do appreciate the importance of taking care of themselves…especially when a championship competition is on the helm.

Essentially, they trim off the ‘fat’ in their lives…so to speak.  Anything not conducive to excellence, is shed.  They seek the perfection of their individual processes, and at all times.  There is usually something that can be reassessed in your life, perhaps deemed as unnecessary, or slowing you down.

They ask the constant question…what in my life is taking up the time and energy needed to pursue a higher level of excellence?  The answer is unique to the individual.

“It is a mindset of excellence.”

John has coached multiple Olympic trial qualifiers and US team members since the start of the program in 2010.

His team recently raced in the Philadelphia Half Marathon, one hitting an Olympic trial “A” standard time for the marathon and another missed it by 4 seconds.

He has shown plenty of experience coaching adult runners. You can see in this interview he sheds a fair amount of light on the adult athlete and the struggles they must overcome and what they do to be successful.

A mindset of excellence, he says, is a key to the lifestyle that creates great runners.

This is easier said than done, but shows that becoming who you want to be is the mindset that you take, which will control your actions.

Though your goals may not be the same, they will need the same mindset and discipline to achieve them.

Hydration Tips For Runners For A Better And Safe Running Performance

How To Choose Running Shoes – The Ultimate 2020 Guide

What Does Hoka One One Mean? And What Language Is it?

If The Shoes Fit