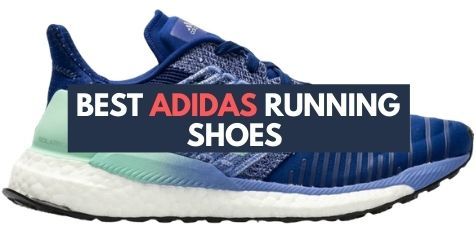 Today, I’m going to give you my breakdown of some of the best Adidas running shoes.

It can get confusing because Adidas is prolific in making a bunch of different models of shoes, variations of shoes, sub-variations, mini product lines, all different things with similar sounding words in them.

The four shoes are the Adios 4, the Boston 8, the SolarBoost 19, and the UltraBoost 19. These are the four that I’m going to talk about today.

The way that they vary is in the:

When I talk about any running shoe brand, I always kind of try to attack it from the daily trainer first because I feel like that gives you the best sense of what the brand is trying to do.

Then, everything kind of like derives or branches off from the daily trainer.

For Adidas, the daily trainer that is also good for beginners is the SolarBoost 19.

This is a shoe that I ran in over the summer. I think I first started running it in July and finished running in it in after the Chicago Marathon into October.

It’s a shoe that I really enjoyed. It’s very comfortable to run in and very good for a variety of paces from your easy days, recovery days, moderate efforts, and even some of the faster paces.

So if you’re running with it on a recovery run, you can easily do that. But it still feels snappy enough that you can get moving on faster paces if you want to put some harder work into that shoe.

I did feel like the upper was a little bit on the thicker warmer side. I didn’t certainly like that and I also felt like it was a little bit heavier than it needed to be for a daily trainer.

But then again, it is a daily trainer so the weight is not as big a concern.

If you want to go a little bit faster than you might want to go in the SolarBoost, then the next shoe that you would look to is the Boston 8.

The Boston 9 is featured as one of these great running shoes for speed. Make sure you check this out.

The Boston 8 is a very fun shoe to run in. It has a much thinner application of Boost in the midsole both in the forefoot and in the heel area and it has for the most part a very low-key sleeper style upper design, which I appreciate very much.

But then when you get to the heel, it’s got this like glossy Boston text on it, which I’m also not a huge fan of the name. I don’t like it when shoe companies name shoe models after cities.

But that all aside, I really enjoyed running in the Boston 8 as both a daily trainer but also as my faster day shoe.

So anything where I was going to do medium or a longer run with some speed play in it or if I was going to have some intervals of speed work that I was going to be doing that are longer in nature like half-mile to a mile or longer, then the Boston 8 is definitely a shoe that I reached for.

Last but not least, the Adidas Boston 8 is featured as one of the best Adidas shoes for 10k races.

The Boston 8 not quite as fast as the racer that Adidas has which is the Adios 4.

The Adios for is probably my favorite of the entire Adidas line. There’s something that is just so spectacular about the way that they’ve manipulated the Boost in that shoe.

It has the thinnest layer of Boost of all the Adidas running shoes and for some reason, that layer of thinness just does something really great with the Boost and lets you experience the Boost in a way that really highlights what Boost is.

The only downside of the Adios 4 that I have though is I don’t think my feet are tough enough to run in the Adios 4 for an entire marathon.

So, in that sense, I think it’s an unsuccessful marathon racer. But for half marathons and shorter, the Adios is definitely something that I would love to have on my feet.

It’s super lightweight and the upper fits like a glove. Again, this is another sleeper style shoe that I just think looks spectacular.

The Adios 4 is definitely one of my favorite shoes in general but also of the Adidas running line. I just think that it feels great to run in that shoe and I always have a good time running in it unless it gets really long, then sometimes my feet start to feel the pounding on the pavement.

On the opposite side of the spectrum is the UltraBoost 19. I’m still going into it and I’m still trying to figure it out.

I’m still not that deep into it in terms of mileage, but initially, I’ve always kind of thought of the UltraBoost as being Adidas’ max-cushioned shoe that they put in their running line that gives you more impact absorption.

– looking to use it on your recovery days,

– your joints are just hurting you a little bit more because you’re adding on mileage in your training block,

– you’re looking for a shoe that can get you through those longest miles and those weekend runs where you’re trying to push the limits of how far can you run and you’re not necessarily worried about pace,

…that’s where I usually think that the UltraBoost fits.

However, they made some changes to the UltraBoost that kind of are pulling back on that, but they still want it to be that shoe for people that want more cushion.

The way that they’ve just added a ton of Boost in the heel and it makes it feel like you’re leaning forward a lot more than I would expect on a max cushion shoe, it doesn’t really quite jive in terms of those two things, the angle of attack plus that kind of use case.

So I think that they’re positioning the UltraBoost 19 more as a daily trainer just with more cushion in it, which I can see the draw and the appeal for that.

The UltraBoost 19 is different than all the other Adidas running shoes in that it has Primeknit in it, which is a very comfortable upper material.

I think it fits like a glove but it also has an appeal to more casual runners or people who don’t consider themselves runners that might also want to run and because they’re not regularly running, they might appreciate the extra cushion and comfort that the UltraBoost can provide.

From an overall kind of revenue perspective, I think it’s a brilliant idea. But for me, as a runner trying to understand this UltraBoost line, it makes it a little bit more confusing.

But you know, there’s no rule that says that a shoe has to fit into a particular box. There’s lots of shoes out there from multiple brands that kind of cross and overlap on a lot of these categories.

And overall, I think that’s more of a bonus than it is a negative because it just means that a shoe has more range and it means that you don’t have to have a closet full of running shoes to be able to properly train for a marathon.

You can rotate the UltraBoost with just a couple that you’re rotating back and forth between and be just fine.

So that’s kind of how I’m understanding the UltraBoost 19. It can be both a daily trainer or it can be that max-cushion longer distance shoe.

It still is heavy and that’s another reason why I really wouldn’t think about it for my faster days or the days where I want to get in some really quality hard pace workouts.

I’d still kind of save it more for those weekend long runs and also for my daily training because of the weight.

Last but not least, the Adidas UltraBoost is one of the best Adidas running shoes for flat feet, overpronation, and heavy runners. It’s also a great long-distance running shoe from Adidas.

Now that Adidas released the UltraBoost 20 and the Boston 9, you can find out really great prices and I think the other shoes are about 20 to 30 dollars cheaper.

So, if you’re looking for a racer, a fast-day shoe, or even a track-day shoe, the Adios 4 at the current price is just an absolute steal.

I know that there’s other shoes like the Pulse Boost HD, the Solar Drive, the PureBoost Go, PureBoost TPR, and so on, but these are the best Adidas shoes for me.

I think the Adios 4, the Boston 8, the SolarBoost 19, the UltraBoost 19 are the core for Adidas’ running.

A lot of people always say that Boost used to be life and that Adidas really needs to step up their game to catch up to all the other brands.

I also hear lots of people asking “are Adidas shoes good for running?” The answer is definitely yes.

Lately, I think Adidas is having great years. The Adidas Adios 4 is just a fantastic shoe. The Adidas Boston 8 wasn’t the most exciting shoe for me to run in for whatever reason, but my feet always felt great in it.

My paces were always great and were spot on and I was always able to hit the workouts in that shoe. It’s not the shoe that I want, but it’s definitely the shoe that I need.

The Adidas SolarBoost was a surprise to me. I thought it would be this big clunky heavy cumbersome shoe and in some senses it was a little bit bigger than I thought it needed to be, but I had very happy miles in that shoe.

I’m not as sure that the Adidas UltraBoost 19 is an absolute hit, but the Adios 4 and the Boston definitely are.

So, even if you’re not going to buy into the entire Adidas running line if you’re looking for that faster-day shoe or that race-day shoe, those are two options that I will always recommend even if we’re not talking about just Adidas.

That’s my thought on the best Adidas running shoes. Let me know what you thought about the entire brand or any of those shoes that I’ve talked about specifically in the comments down below.

That’s all I have for this “best Adidas running shoes”. Thanks so much for making it all the way to the bottom of this post.

For more reading, you can read this interesting thread on Reddit.