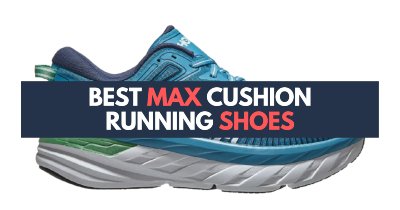 Today, we’re going to be talking about some of the best max cushion running shoes for men and women.

These are the kind of shoes that you’re reaching for on the days where you’re the most tired or where your body’s the most beat up and you’ve got to run the longest mile.

This is the category where cushion is at a premium and heavyweight be damned.

These are the real thick boys of the running world and I’m going to give you some of the best max cushion running shoes.

The Bondi 7 is a classic max cushion shoe coming in at 10.5 ounces.

The Bondi lineup kind of exemplifies this category of shoe and it’s got the tallest stack height available on a Hoka road shoe.

It’s just full of that compression-molded EVA foam. The Bondi has got 32 millimeters of stack height in the forefoot and a 4-millimeter drop.

It’s also got a rocker to help you roll that foot off the ground. It also has an Ortholite liner, which is going to be something you see frequently in this category to make sure that step-in comfort is at its maximum level.

The Bondi has got loads of foam all around the heel collar, in the ankle, in the padding of the tongue. Everywhere you can make something soft in this shoe, it’s soft.

The Hoka Bondi 7 was much improved over the Bondi 6 because Bondi 6 took like 30 or 40 miles to really break-in.

This year in the Bondi 7, I felt like I got that max cushion goodness from the outset straight out of the box and it’s definitely going to be one of the best max cushion running shoes of the year.

Next, let’s talk about the Triumph…

It’s got PWRRUN+ which is a magnificent foam that looks like Boost, smells like Boost, but behaves better than Boost and there’s tons of it in the midsole.

This shoe has 24 millimeters of stack height in the forefoot going up to 32 millimeters in the heel for an 8-millimeter drop.

It’s got PWRRUN+ Ortholite liner and it’s got memory foam all over the place as well.

I do feel like it’s trimmed down just a little bit and Saucony toned down the amount of memory foam in there, but even so, it still comes in at a whopping 11.3 ounces.

Nevertheless, the Triumph 18 runs like a much lighter shoe.

It’s part of what I think is the new category or the new school in max cushion running shoes where you’re still getting that maximum level of impact absorption every time your foot hits the ground.

But these new materials that they’re able to use keep you from feeling like you’re getting too mired down in excess softness so you’re getting kind of the best of both worlds in these shoes.

And the Triumph 18 does a fantastic job of exemplifying this new direction for max cushion.

Third, let’s talk about the UltraBoost…

An UltraBoost is always kind of a controversial running shoe to include in any kind of top five category article.

But make no mistake this year because the Adidas UltraBoost 20 is definitely a running shoe.

I think the 20 is probably the most runnable UltraBoost that I’ve ever experienced going back several years now.

But the controversial part about it this year is not whether this is a great shoe to run in.

The question is “does it still count as a max cushion running shoe because they’ve trimmed down the amount of Boost in that midsole?”

In fact, there’s a lot of shoes that I would consider as everyday trainers that have much more stack height than this shoe does in the forefoot, but it is 100% Boost in the midsole of this shoe.

So, it does still give you some of that max cushion feeling. In terms of the heel, Adidas basically did almost a direct upper swap from the Solar Boost 19 of last year.

All the materials are very soft towards the back half of the shoe and in the front, you’ve got that Primeknit which I’m still a really big fan of and I think it’s very comfortable.

So, while it might not be max cushion, it still is a max comfort shoe and I think it belongs on this list definitely.

The UltraBoost 21 is one of these great 10mm heel-to-toe drop shoes.

Next, let’s talk about what I think still belongs in the 2020 category, the 1080 from New Balance…

In the heel, it’s a tall shoe, it’s a bouncy shoe, and it’s going to soak up the miles. The 1080 is absolutely fantastic to run in.

It comes in at 9.9 ounces and that’s also including the Ortholite liner that’s in the insole.

I think this is the best example of this new kind of max cushion shoe where you’re getting max comfort and max cushion but also you’re getting a very lively ride that will help you keep your foot moving and keep that turnover high.

While it’s not going to be your speed-day shoe as well, you’re never going to feel really bogged down in this shoe.

At number five, let’s talk about the Infinity…

It’s got all the things that I liked about the Epic React. It’s got a super comfortable upper that has that sock-like feel, which seems to be falling out of favor these days in terms of running shoe, but it’s still a material that I enjoyed.

The Infinity has got even more React foam in the midsole. The shoe also has GuideRails, which is going to help those of you who need a little bit more stability.

You’re going to benefit from the GuideRail technology when you’re taking this shoe on your longest runs or on those days where you’re the most tired because it’s going to help your ankle stay in place even if your form is getting a little bit sloppy.

In addition to that, it also has a much wider base. The amount of shoe that you’re landing on is a little bit wider, which is also going to increase the amount of stability that’s in this shoe.

I’ve seen lots of runners running in the Infinity Run React and logging tons of miles in it. It’s a shoe that until just recently I thought was going to be Nike’s only max cushion shoe available because I wasn’t sure that we were going to get a Vomero this year.

I thought the Vomero line had been killed off, but I just saw some images today of the Vomero 15.

Until then, the Infinity Run React is your best bet if you’re looking for a Nike max cushion shoe.

When it comes to picking a winner in this category, for me, it’s going to come down to the Saucony Triumph 18 and the New Balance 1080v10.

I’m a big fan of that new school of max cushion shoes where you’re still getting all that max cushion comfort but you’re getting it in a package that doesn’t feel as heavy and bulky as it once was.

I’m a big fan of that Fresh Foam X and how springy it is. I think when you’re talking about a heavier shoe, and these shoes still are on the heavy side, that Fresh Foam X compensates for the weight a little bit better than PWRUN+ of the Triumph 18 does.

When we’re talking about max cushion and max comfort, I think that the New Balance 1080v10 delivers with that Fresh Foam X material.

I think that for the purpose of max cushion when you’re looking for the shoe for the longest runs, for your recovery days, for the days when your body is the most beat up, I do like that the way that the Fresh Foam X in the 1080v10 can deliver all those things while avoiding being cumbersome or clunky.

So, because of the innovation and the way that it’s bringing max cushion running shoes forward, I’m going to give the best max cushion shoe of the year to the New Balance 1080v10.

Those are my top five best max cushion running shoes, but I’d like to include a bonus and the bonus for this year is the Glycerin.

The reason I put it in the bonus is because I actually didn’t love the Glycerin. This was my first time running in the Glycerin this year and I was expecting something super plush, super mushy, and super kind of like old school max cushion shoe.

That’s not really what I got. The Glycerin felt kind of like not max cushion to me. I just didn’t really get any of that maximum level of anything in this shoe and it just kind of felt like a daily trainer to me.

So, because lots of people consider it a max cushion shoe, I thought I’d throw it in there as the bonus for this year.

That’s it, guys. Those are my thoughts on the five plus one best max cushion running shoes.

Let me know in the comments what’s in your top five, I’d love to hear about it more.

That’s all I have for today, everybody. Thanks for making it all the way to the end of this article and hopefully you guys stay safe out there on your runs and I’ll see you in the next one.