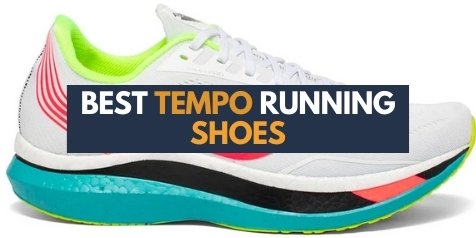 Today, we’re going to talk about my best tempo running shoes. These are my favorite type of shoes and I think a lot of you feel the same way.

I’m going to talk about why I like them, why I think they might work for other people, and maybe some negatives about them.

This is a fantastic shoe and I like it for a couple of reasons. The first one is that the upper really holds your foot in place.

It’s very snug and it’s a bootie construction so you don’t have to worry about the tongue sliding to the side because it’s not gusseted or really anything like that. It is a snug fit, but it’s a comfortable one.

But the main reason that I really like this shoe is the midsole. The Fuelcell Rebel has FuelCell foam that’s really top-notch.

The reason for that is that it’s protective and soft but also gives you some response and some pushback and spring.

There’s plenty of protection to take this for longer tempo days, but it’s also enough that you really get that pop and that spring off the toe. The toe is very snappy, which really helps with propulsion.

One negative is that if you look at the lateral side, the shoe has that flare outward like the TC. So I guess if you’re a person who struggles with overpronation, this flare does definitely promote some overpronation.

It might be a little bit troublesome to you, but it doesn’t cause any pain or discomfort to me. But it is something that I do want to point out.

But despite this flare in the midsole, the New Balance FuelCell Rebel is such a good shoe and it’s very light, as well.

2. Hoka One One Rincon

Some of you are going to look at this Hoka and be like ‘that’s not a tempo day shoe, it’s too cushioned’. Sure, I could see your argument there, but the Rincon is very light.

And with the meta rocker technology that Hoka has incorporated into their shoes, you get a very nice roll forward through your stride. Also, it’s easy to pick up the pace in this shoe.

The cushioning underfoot is nice. Hoka is using standard EVA which is not wildly responsive.

I’ve already talked about the differences between the Rincon and Hoka Clifton 6 if you want to check that out. But in short, the Clifton is more of the daily trainer type of shoe.

The foam in the Rincon is a tad bit firmer so you do get a little bit of response ever so slightly.

However, there’s not too much foam where you feel like you’re sinking down onto that platform, which causes tired legs and just gives you a little bit of a laggier ride.

The upper is lightweight and extremely breathable.

I think I would use this shoe over some of the others in my tempo day choices. If I was looking to do a longer run maybe upwards of 10 miles but I want to keep that pace and I don’t want something that’s going to weigh me down, the Rincon is a really good option for that.

One negative about the Rincon that I will say is it’s not very durable and the midsole does kind of die down over time and sort of starts to concave a little bit like a slope. But other than those things, it’s a great price point and it’s a really good tempo day choice.

I think this colorway is called the Voyager. I’m really starting to dig this brand.

If you’re unfamiliar with it, basically, it’s a startup company from Austin Texas and they’re making running shoes.

They’re making simple efficient great running shoes and they’re at an extremely low price point. I think you can get this shoe really cheap, which is insane.

They also offer a subscription plan so you can get this shoe coming to you for a low price every one, two, three months, it’s kind of up to you.

Anyway, why do I love this shoe?

Well, it’s kind of the opposite end of the spectrum from the Rincon, obviously. As you can see, there’s a lot less midsole cushioning.

I like this shoe a lot because it’s simple, the upper is extremely breathable, soft, and very comfortable.

Then you have this midsole which is just EVA. We’re not talking anything crazy here, it’s just a slab of EVA foam.

When you start running in this shoe, you feel that cushioning and you do definitely get some response.

It melts to your foot like butter. It’s almost like it becomes an extension of your foot and you don’t even realize you’re wearing a shoe.

There’s no doubt about it, in the shoe, you are protected. It doesn’t look like much underfoot, but it’s just enough.

One negative I could point out about this shoe is that it kind of lacks in the durability department. There’s absolutely no rubber on the bottom.

So you are kind of going to be limited in how much use you can get out of one of these pairs of shoes.

But because the price point is so low, you could buy two at a time and just keep one on the back burner.

It also comes in other cool colors. Go check them out.

I love this shoe. The Razor 3 really saved the Hyper Burst cushioning material. I tried the GoRun Ride 8 and I did not like it. I was super underwhelmed with Hyper Burst.

I wanted to try Hyper Burst on some other Skechers running models so I gave the Razor 3 a shot and I’m really happy that I did.

The Hyper Burst midsole in the Razor 3 feels so much better than in the GoRun Ride 8. It’s so protective and soft.

I would use the word soft especially when you pick up the pace and the Razor says I’m ready to go and I’m ready to help you out.

I feel a spring back and the shoe helps you get to the next motion in your stride. It does offer something that standard EVA just does not offer.

There’s a lot more response in this shoe than in the other three that I talked about. Maybe the FuelCell Rebel has some of the response that this shoe has, but the other two, because they’re standard EVA, they just don’t have exactly the same sort of feeling.

I was doing a lot of half marathon training with this and it performed flawlessly no matter what I threw at it.

I took it on some easy runs, but on the tempo days, it was golden. Not only does the midsole feel great, but the upper is fantastic, as well. It’s super breathable and you get a nice lockdown through the midfoot.

The outsole offers some decent traction, as well.

I have like nothing to complain about in this shoe. I love it and it probably would have been number one if another shoe hadn’t come out on the market…

And the number one shoe on my list for the best tempo running shoes is the Saucony Endorphin Speed.

The Endorphin Speed also won the title of the best running shoes for speed.

Saucony kind of has it this year. This isn’t just my favorite tempo day shoe, this is easily one of my favorite shoes that I have in my collection.

Where do I begin with this beautiful creation? This is a true do-it-all running shoe.

This shoe’s underfoot feel is like nothing else on the market. First, you’ve got PEBA (polyether block amide)-based foam. We saw this in the Endorphin Pro and Saucony went ahead and threw it in the Endorphin Speed.

This PEBA-based foam is a hell of a lot more responsive than Hyper Burst, it kicks FuelCell out of the park, it makes PWRUN+ look geriatric, and it gives Zoom X a run for its money.

When I tell you this shoe is responsive, it is so responsive. Of course, it gets some help from a nylon plate sandwiched in between the two layers of midsole material.

You’re still getting a lot of spring forward, a lot of propulsion, you feel like you’re being throttled forward, and you get some flex for your foot. This is the real deal.

I would run a marathon in the Speed than I think I would in the Pro just because I don’t know how my foot’s going to handle the carbon plate 20+ miles in.

I feel like my foot would do a lot better with a nylon plate underfoot because you’re still, like I said, getting that propulsion, getting that spring, getting the benefits of having a plate but still having the ability to flex your foot a little bit.

I feel like the speed really works with your foot and just gives it that extra oomph that you need on a tempo day.

Well, those were all the 5 best tempo running shoes. You really can’t go wrong with any of them.

But in the meantime with everything that’s been going on, get out there and stay safe 🙂