Today, I’m going to be talking about the difference between the Birkenstock soft footbed vs regular and their high-arch footbed.

In addition, I will briefly talk about some new developments as far as the difference between the regular size and the narrow size.

Related: Birkenstock vs Mephisto Comparison – Which One Pays Close Attention To Details 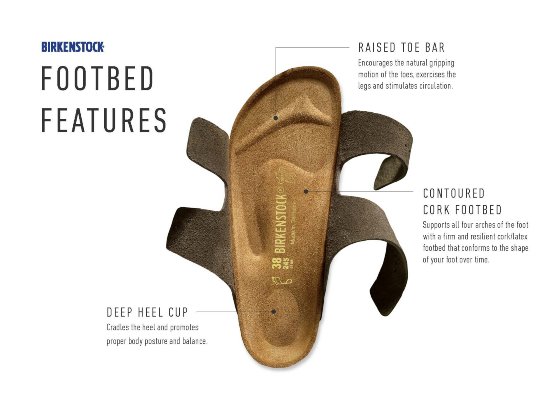 For people that don’t really know a lot about Birkenstocks, what makes Birkenstock different is their footbed. That is like the whole point of wearing Birkenstocks.

Birkenstocks are extremely healthy for your feet. If you have Plantar Fasciitis, Morton’s neuroma, if you’ve got really high arches and you typically are having a hard time in regular shoes especially during long hours on your feet, you may want to look into a pair of Birkenstocks.

Birkenstocks are not just sandals and they have many closed-toe styles.

So, if you are looking for Birkenstocks because you work on your feet and you can’t wear sandals, that’s not a problem.

There are many different styles of Birkenstocks and they even have some styles that have a different bottom. So, if you work in kitchens, it will have slip resistance on the bottom, which is really important for situations like that.

But the biggest thing is the footbed. When you first get into Birkenstocks, the first thing you’re going to look at is ‘which footbed do I get?’ ‘Do I get the regular footbed or do I get the soft footbed?’

When I got into Birkenstocks, I had a hard time finding a really good comparison of the two.

The only difference between the two is in the normal footbed, you have several different layers. You have your suede liner, which you can’t really tell because when you wear it, it gets packed down by your foot and by your perspiration and it really conforms to your foot.

So, the top layer is suede.

Underneath that layer, you have cork and that is the layer that as you’re wearing. Cork compresses and customizes the footbed to your foot. So, it’s kind of like wearing a hard orthotic that you didn’t have to pay $500 for.

Underneath that, you’re looking at the actual contour. You have your deep heel cup and your contoured footbed.

There are other shoes out there that have the cork. However, because the heel cup is higher than the toe in other shoes, if you have Morton’s neuroma or if you have issues with your tendon, you’re not going to get the same benefit.

If you wear your Birkenstock sandals all the time, you’re going to notice the shape of your foot changing.

I used to be really into barefoot walking and barefoot running and so it wasn’t as drastic for me, but your foot is going to go more to the natural shape of feet, your toes are splayed out a little bit more, and your heel is a little bit more narrow.

You’re going to find that your foot is a little wider in the forefoot just because it’s allowing all of your bones to sit and settle into the correct position.

On the contrary, most modern shoes have a pointed toe and they force your toes together, which is one of the major benefits of the Birkenstock shoe. They really get your foot into a neutral position.

It takes a while to get used to them especially if you’ve been wearing really tight shoes or regular shoes or you have any sort of foot problems because your feet are not in the regular position.

I started off with the Birkenstock Gizeh which was probably not the best shoe for me to get used to Birkenstocks in because of where the toe is.

The toe bar actually pushed my foot forward just enough that it took a little bit longer to break these in.

I found that with other styles like the Paris, the Boston, the Arizona, or the London, the break-in is a little faster if you’re new to Birkenstocks just because your foot can settle into whatever position is most comfortable for it a little bit easier without being forced into a specific position forward or back.

So, that’s what the regular Birkenstock footbed is like.

Now, a lot of people complain about how long it takes to break in their feet in the regular footbed.

So, Birkenstock, being a normal company that wants to get as many people to buy their Birkenstocks as possible, came out with the soft footbed.

The soft footbed is exactly the same construction as the regular footbed. The only difference is underneath the suede layer and right above the jute layer is a layer of memory foam.

It’s not that soft. You can feel it when your shoe is new, but it’s not like squishy like wearing a Nike if that makes sense.

It’s still hard and you want it to be hard, which is part of the benefit.

After wearing Birkenstocks for a while, I have determined for myself that the soft footbed is way more uncomfortable than the regular footbed.

Because the soft footbed is becoming more popular and it’s easier time going back and forth between a soft footbed and Nike versus a Nike and a hard regular footbed. 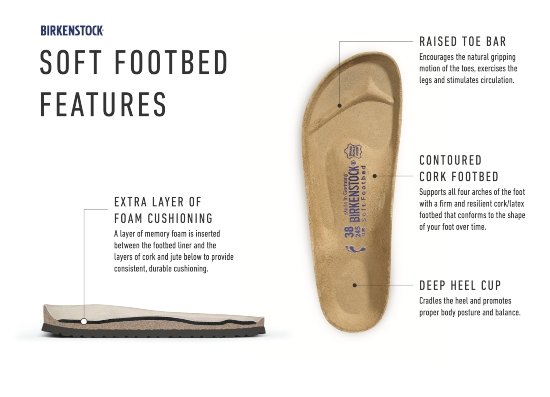 Again, because of that, Birkenstock are selling more of them and logically, they make more of what they’re selling.

So, if you are into Birkenstocks and you need them for any kind of reason, you can still find some of the specialty styles, but you probably need to pick them up fairly soon because they’re not going to be making the Paris in the regular footbed for a while, it appears.

If I get a new pair of Birkenstocks in a regular footbed, I no longer have to break them in. I put them on and they’re as comfortable as any of my other Birkenstocks.

However, if I get a shoe in the soft footbed, it takes several months for me to feel comfortable in those shoes.

That footbed will not feel comfortable on me until I have packed down the memory foam.

Who is the Soft Footbed Good for

The Birkenstock soft footbed is really good for people with an extremely low arch whose arch has not fallen. So, if you never had a high arch and you’ve always had a low arch, then the soft footbed is good for you.

It’s good for people that go back and forth between regular shoes and Birkenstocks or they don’t have any kind of foot issues.

But there are so many people that are complaining about the soft footbed. They’ve worn Birkenstocks for years. They’ve been wearing them because they’ve had foot problems, they bought a pair with a soft footbed and the problem is they cannot get them to break into their feet.

The people that have been buying your shoes for 40 or 50 years do not like the soft footbed and you are shooting yourself in the foot literally.

These shoes need to be offered in both footbeds.

As far as the high-arch footbed, it is only available in certain styles unless you contact Birkenstock directly and you can get them custom-made.

A lot of people don’t realize this, but if you have a prescription for orthotics, you can actually talk to Birkenstock, let them have your prescription, and they can make you Birkenstocks in that prescription, which is a huge benefit for people that have more severe foot issues.

What I will say is unless you have a naturally low arch that is not causing you problems, I do recommend going with the regular footbed and going through the break-in process because, in the long term, they’re a lot more comfortable.

That said, if you’ve got a lower arch or you plan on going back and forth between shoes a lot, the soft footbed is a perfectly good option.

One more thing that you might not be aware of is when I got my Birkenstock Londons, they fit beautifully.

I kept wearing them and eventually they broke in and I was fine. When I wanted to buy the same style again, I thought well maybe I needed to go up a size and so I did.

It was way too big so I sent it back and got my regular size and again, it was tight on the top and tight in the toe.

I went into the store and it’s an older store and they happen to have an older pair of Birkenstock Paris in the hard footbed. I tried them on and they fit perfectly.

So, one of the other issues with the soft footbed is even though that memory foam is only like a millimeter or two millimeters thick, they didn’t account for that change in thickness in the other layers.

Because of that, there is a slight size change.

So, with the soft footbed, you’re going to have less room for the volume of your foot and if you’ve got a high instep, you may find that putting on a closed toe shoe that is a soft footbed is going to be tight on you and that shoe is not going to be comfortable until you’ve worn it enough to pack that memory foam down.

Frankly, that takes a while because when a shoe is not comfortable, you don’t want to wear it.

Also, because it’s a little higher, it changes the way your foot sits in the shoe and that’s why I found it a little bit tight on the toe.

Again, once the memory foam packed down that spot on the toe fit fine.

What I did to solve the problem is I sprayed the inside of the shoe with a mixture that helps leather stretch.

That really helped, but frankly, I’ve had the shoe for months and it’s still breaking in.

So, for someone that has worn a lot of Birkenstocks and you get one of the newer styles and all of a sudden your Birkenstock feels different, that’s why.

For someone that is new to Birkenstocks that’s having foot issues, I definitely recommend the regular footbed. It is far superior to the foot unless you have a very low arch that they can’t break in the original footbed.

In that situation, the soft footbed is perfect.

It seems the soft footbed is starting to be moved over to all Birkenstock styles and so that’s something to be aware of.

… which brings me to another issue …

… Birkenstock has always had two sizes, regular and narrow. Narrow styles are obviously only for narrow-footed people. So, anyone that has a wide foot, forget about those cute styles.

The difference between the regular and the narrow is the narrow tapers a little bit at the toes, which pushes your toes together, which is exactly what you don’t want your shoes to do unless your foot is actually narrow and most people’s feet aren’t.

I understand they’re doing it because they’re trying to catch the people that don’t wear Birkenstocks all the time, but they’re leaving their loyal consumers in the lurch.

So, there you have it. This was the Birkenstock soft footbed vs regular. I hope I was successful enough to make things a little bit clearer for you.

Tell us about your experience with both footbeds in the comments section below.

8 thoughts on “Birkenstock Soft Footbed vs Regular Comparison – Which Is More Comfortable?”