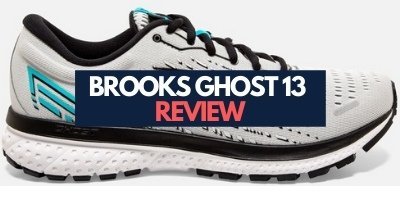 This is a review of the all-new Brooks Ghost 13.

The Ghost series is one of those running shoes that always attracts a lot of attention.

Quick Navigation hide
So Famous
Family of Shoes
Updates
Upper
Widths
Midsole
Neutral vs. Overpronation vs. Underpronation
Winning at The Fitting Station
What Distance
The Ghost at The Gym
The Ghost at Work

People are always excited to check out the new Ghost that is going to hit the stores or just want to stock up on the old one.

A lot of runners also go to the store and say their neighbor told them to go and get the Brooks Ghost.

The Ghost always checks a lot of boxes because it’s an easy shoe to recommend, because it fits really well and because it really accommodates most people’s foot and foot sizes.

I hear a lot of people who are not runners say that their podiatrist recommended the Ghost for their Morton’s Neuroma, Plantar Fasciitis, Metatarsalgia, you name it.

This just kind of says something that the Ghost series has really made it to people’s radars that they just feel confident to recommend it for their neighbors or their fellow runners.

Because the Ghost accommodates so many people and kind of help fix their foot issues, it’s really easy for somebody to feel really great stepping into the shoe if they’re brand-new to running or if they want to try out something that lots of runners are lifetime fans of.

If you’re going to try a couple of different things, maybe some neutral stuff, some stability stuff, some more cushion, or some less cushion, the Ghost 13 is just that perfect right-down-in-the-middle road shoe that can accommodate a lot of people, a lot of distances, and a lot of activities.

This is what a lot of brands are doing. A lot of brands have that sort of family of shoes. They have shoes that might be a light neutral cushion shoe for maybe workouts, races, and they also have a big cushion neutral shoe that a lot of people use as their everyday trainer.

Companies also have something that’s a little bit bigger and a little bit heavier for somebody who’s doing longer miles and wants more cushion where the weight of the shoe maybe not be a big issue for them.

So if you love the Brooks Ghost but want to start doing some track workouts, you can really easily transition into something like a Launch because it’s sort of in the same classification family-wise but lighter, faster, and springier.

Also, when you get into lighter or faster shoes, a lot of times the price point dictates as well.

Because the Brooks Ghost is that mid-cushion neutral, it’s that perfect shoe that almost everybody can put and just feel a way better upgrade than what they’ve been running in previously, especially if they’re new to the running game.

There are a couple of small little changes that Brooks made on the Ghost 13 from the previous iterations, but nothing really life-changing.

So, nothing crazy, but the shoe feels a good bit lighter. I think that lightness comes from the upper being more breathable.

The upper on the Ghost 13 vs 12 is definitely thinner and definitely more breathable.

Again, I think that’s part of this little bit of weight reduction, but it’s the breathability that really gives that perception of lightness that the Ghost 13 has.

The way the upper on the Ghost 13 stretches around my foot and the way that it breathes, it’s a nice noticeable upgrade that I felt right away.

I have sort of wider feet and I have some toe issues and sometimes, I just need a little bit of extra width.

The Ghost 13 gives me the width I’m looking for even if it’s not technically a wide shoe, but it’s a more accommodating wide.

The Brooks’ 3D stretch material on the upper makes the Ghost 13 able to expand around your foot a little bit more.

Because of this new 3D stretch setup, I honestly felt the upper is a little bit more stretchy in the 13 than I did in the previous versions.

It definitely holds my foot a little more forgiving and I definitely wouldn’t need a little bit wider shoe.

Brooks does make the Ghost 13 in widths, as well. Not all the colorways are available in wide so far, but on the men, they have a 2E and on the female side, they have a D.

They also have a select couple of models in narrow, as well.

Along with the Launch, Brooks will do special season releases and you might find somebody in like a red, white, and blue.

They can also go for something that’s got just crazy little designs and such as soon they sponsor a really big race and they’ll make a whole colorway just for that race.

The Brooks Ghost 13 is a neutral shoe that’s definitely not going to fix you. So, whatever your natural inclination is in this shoe, it’s just going to accommodate you.

Brooks’ big thing in the Ghost is their DNA Loft. That’s their proprietary cushion blend that they’re using to kind of protect you as you’re running through.

The Ghost has that 12-millimeter stack height from heel to toe, which is the same as it’s been.

Again, the Ghost is not going to fix you or interfere with your form. It’s just going to give you a really great nice cushioned feel all the way through your cycles.

To put it differently, if you’re somebody who may slightly overpronate or slightly underpronate, the Ghost is going to be fine.

So, if you’re somebody who’s been running in a neutral shoe for a while and you have just a little bit of overpronation but have nothing that’s bothering you and no injury history, the Brooks Ghost 13 is not going to mess with your foot.

It will not add any extra stability because sometimes, just having the right amount of cushion that kind of just works with you instead of against you, that seems to be enough to help you.

Technically, a person who wears down the inside of the outsole because of their weaker flatter feet and needs that extra stability, a shoe that has just better cushion lines throughout will give you enough support there.

If you wear down the middle or wear way on the outside, technically you want to get a neutral category shoe.

It seems somewhat counterintuitive that if you’re somebody who kind of lands on the outside of your foot, it feels like that you would say ‘I’m not stable, I need some extra stability in my shoe, I should get a stable shoe’.

Well, most of your stable shoes are really only protecting you on that medial side and that will actually exacerbate that problem and push you even further to the outside.

So what you want to do is wear a shoe that’s neutral or a shoe that has outside protection to it.

There’s not a ton of them, though, but there are some models that have this GuideRail technology or extra protection on the outside to roll you in.

Winning at The Fitting Station

Because the Ghost has what we call this real plush step-in feel, which is one thing Brooks always really prides itself on, the shoe has that winning at the fitting station.

This means that when somebody puts a Brooks shoe on, it just feels great right out of the box and accommodates their foot the right way.

The Brooks Ghost 13 is that perfect example of ‘you just know if it’s right or wrong for you’.

It’s not too light like the Launch but it’s not too heavy like the Glycerin, either. It’s right there in the middle.

In short, the Brooks Ghost 13:

I wouldn’t recommend the Ghost for a marathon and the people who have actually done that fall in that just sort of perfect world scenario.

But in a perfect world for me, this is your everyday training shoe that you might use for a mile, a 5k, a 10k, or half marathon.

You might have a shoe that is a different shoe for your race-day stuff or a shoe that might be a little bit different for you especially if you’re doing a full marathon and you’re getting into those 16,18, 20s.

I totally understand there are people that don’t have a zillion different shoes available. I’m not saying you can’t wear the Ghost for a marathon, but in a perfect world for me, you should have a shoe that might be a little more protection for you if you’re going to be going longer especially if you’re not trying to break two hours for a marathon.

Then conversely, if you are trying to go out there and run a massive PR for yourself or whatever that goal may be, it would make sense that maybe you would have a shoe that’s a little bit lighter for that race-day.

Again, the Brooks Ghost could be a training shoe, and then maybe you have something that’s faster for your race-day shoe.

The Ghost at The Gym

You can also wear the Ghost for gym stuff as well depending on the activities that you’re doing.

Because it has a pretty decent heel set and has some nice cushioning, I wouldn’t recommend it if you’re doing stuff that’s really weight-bearing.

Instead, you need something solid and low profile to provide you with the stability you need like the Reebok Nano 9.

If you’re doing just general cardio, running around, lift a few weights here and there, the Ghost 13 is totally fine.

And if you’re doing a class that has some side-to-side mobility, again I’m not so jazzed about having that higher heel-to-toe drop.

The Ghost at Work

Because of that versatility, the Ghost series is one of those shoes that we see a ton of people just using as walk around casual shoes.

It also appeals to people who love wearing an athletic shoe to work because they need something comfortable to work and stand in all day.

I hope this answered some of your questions. If you have any other questions I haven’t answered in this Brooks Ghost 13 review, feel free to leave it down below in the comments section.