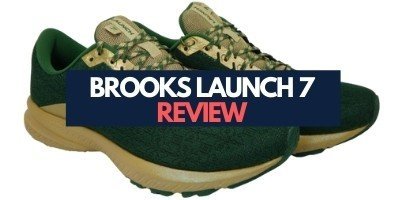 This is a review of the Brooks Launch 7. I’ve run about 130 miles in these bad boys and I’m ready to tell you about what I love and what I didn’t find good.

First things first, we just got to go through some of the specs of this shoe.

The Brooks Launch 7 is a support neutral shoe. The midsole is the BioMogo DNA with a 10-millimeter drop with 26 millimeters of stack height in the heel and 16 in the forefoot.

The weight comes in at 9 ounces for men and 8 ounces for women. The arch is medium to high.

This shoe is going for speed and that BioMogo DNA midsole makes it great for road running.

However, I’m not going to lie, I would argue it’s for more than just road running.

All right guys, let’s work our way from the bottom to the top of this shoe with the pros, and then we’ll go through some of the cons. Then, I’ll give like an overall recommendation of who I think should be buying this shoe.

So first off, the bottom is this nice tread that goes along the whole entire shoe.

This setup provides a lot of stability that in some other road runners you’re just not going to get.

I would say it also proves to be a good source of stability in all elements.

Moving up from there, you have the BioMogo DNA. This midsole is kind of right in the middle ground of providing enough cushion while also allowing you to feel the road underneath your feet

This is huge for a shoe that you want to be running your 5ks,10ks, and maybe a couple of half marathons in it.

It really allows you to have the support you need for those miles while also feeling the road underneath you.

The 5 was more of a softer like cloth textile upper while the 6 and 7 moved into more of this kind of synthetic feel.

So the upper has more of a synthetic feel to it, which adds to the durability and makes it so that this shoe is not going to fall apart on you any time soon.

Overall, I would say from the outsole, midsole to the upper, the shoe kind of screams 5k, 10k, half marathon in all elements. This seems to be the shoe for that.

One more thing I did want to add about the Brooks Launch 7 is the heel cup is more of a mid-cushioned heel.

So for someone who has a very narrow heel, the Launch 7 secures the heel in nicely. It just makes sure your heel stays locked in and not have to worry about heel slippage.

One other good thing about the Launch 7 is I feel like I have a little bit of extra room in the toe box, which is great and would give my toes much toe splay.

Again, the heel runs slightly narrow, which is perfect for runners looking for a running shoe that has a wide toe box and a narrow heel at the same time.

That being said, let’s get into some of the cons that I found with the Brooks Launch 7.

There’s not nearly as many cons with this shoe as there were pros, but there are a couple of things that I wasn’t in love with.

In general, the Launch 7 is kind of a heavier shoe. For 9-oz shoe, that’s kind of heavy for a shoe that I want to be running really fast in.

I mean the shoe has the 10-millimeter drop, I can really feel the road underneath it, and I’ve got good traction.

Those are all things I’m looking for in a good 10k shoe for example, but I wish it were a little bit lighter. However, this is not a huge setback to affect the performance of the shoe.

This is something I kind of hinted to when I was talking about the upper.

The upper kind of functions as both a pro and a con. The breathability of this upper just doesn’t seem as good as the Brooks Launch 5 that had that more cloth upper.

The shoe that I’ve been running in recently, the Saucony Kinvara 11, has a much thinner cloth feel upper.

So if you step in a puddle with the Kinvara on, your socks are going to get wet instantly because the upper is more geared towards breathability.

However, I’d like the Launch 7 to be a little bit more breathable rather than this direction that seems to be more oriented towards durability.

Who is it for

So who should buy the Brooks Launch 7?

As I have just mentioned, the Brooks Launch 7 is one of the best running shoes with wide toe box and narrow heel.

It’s also great for someone who runs in multiple seasons, likes to run on different terrain be it road, clay, sand, and maybe snow.

However, I don’t know if you could take it on technical trails.

It may work fine on light trails and I think the midsole and the outsole would allow you to really feel probably the roots and the rocks underneath your feet while providing durability with the upper.

The Brooks Launch 7 is a very versatile shoe for someone who’s most likely going for 5ks, 10ks, or a half marathon. I don’t know if I would personally at this point go too much beyond that.

That being said, I have the recent experience of running in the Saucony Endorphin Speed which is a much more cushioned, a much more stack plated shoe.

That’s it, that’s all about the Brooks Launch 7. I’m still crushing miles in the Saucony Endorphin Speed. I’m closing in on about a hundred miles in those and I think next week I’m going for about 50 miles.

I know I’m going to take them more than 200 miles personally.

But that’s enough for the Brooks Launch 7 review, enjoy your day, enjoy the rest of your weekend, peace out everybody.