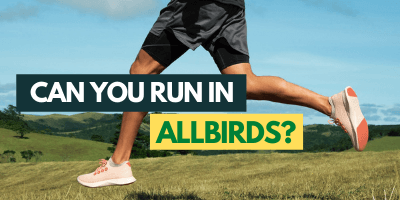 Now that Allbirds have a decent fan base, a lot of you guys are asking “can you run in Allbirds?

Well, the answer was no and now it’s yes.

The first shoes that Allbirds manufactured were lifestyle shoes which did not have the protection and cushioning needed for performance purposes.

The good news is the Tree Dasher is Allbird’s first performance running shoe that can even be used as a lifestyle shoe.

Related: Can You Run in Nike Metcon 6?

Can You Run In Allbirds?

Yes, you can run in the Allbirds Tree Dasher running shoes.

Allbirds is one of those companies that’s all about sustainability, which obviously is a great thing.

It’s is a B Corp, which means they are evaluated based on their environmental impacts.

Every material and product they design has to have environmental benefits. That’s why they use a lot of renewable materials.

Another new thing that they’ve just started doing is if you look on your insole, they actually label on the inside what the co2 is for this product.

So, they actually give the exact amount of emissions that come from the production of each shoe.

Allbirds try to use as many sustainably sourced materials in the upper, midsole, sock liner, and everything like that.

So, eventually, they have a goal of zero emissions in their production. I love this and I hope more companies and brands do this. 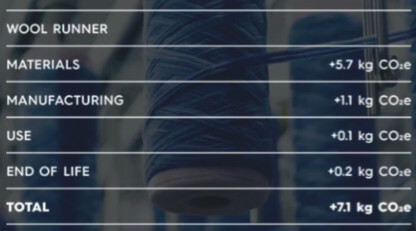 Related: Are Nike Air Max Good For Running? Which Air Max Is The Best For Performance? 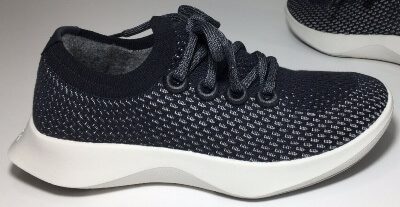 Right off the bat, the Tree Dasher looks like kind of a shoe that you could wear anywhere.

This is a neutral cushioned light stability running shoe. It feels a lot like the Brooks Revel or the Hoka Hupana Flow. I’ve run a lot in it and it feels very similar and the foam is very similar.

Who is the Tree Dasher For?

The Allbirds Tree Dasher is great if you…

Let’s start with our performance report…

I actually had a pretty enjoyable time running in this shoe and was kind of surprised for a first shoe release from a company that’s not really known for running.

The ride is a little bit firmer than I thought it would be, especially for a shoe that’s known for its “comfort”.

I like the ride personally because I like a firm ride, but it’s not as soft or responsive as you’re going to get from a lot of other shoes.

It’s actually just a great shoe in general and this reminded me of that a lot except that the Hupana Flow is more locked in throughout the upper.

With the Tree Dasher, because of its width, you don’t have that super locked-in feeling. It’s basically a shoe that kind of fills in that gap for 80% of the runners where it’s just going to work for that many people.

On the bottom, you do have a couple of rubber sections made from natural rubber of course.

You can see the gray pods on both sides. The divots in them are about 1.5 millimeters thick and the durometer is 67 shore A.

I don’t know the total thickness of the rubber because it is inset into the midsole, but you do have just over 50% coverage.

In the midfoot, you have some exposed midsole material that is acting as your outsole, which means this has to be ground contact foam.

The midsole is made of what they call Sweet Foam, which is a foam made of sugarcane. This is the world’s first carbon-negative green EVA midsole.

Allbirds website says it is a dual-density midsole in the shoe. But my guess is that there’s a foam on the outside that you see is green and that once you look through the inside, there’s probably a softer more cushioning version on the inside.

They do mention that it is energy-return foam. So, they try to optimize how much energy return is happening throughout your footstep.

I guess you’ve heard the term energy return a lot in the Nike shoes and Adidas higher-performance running and I am surprised they mention it in this product.

In addition, they have a foam Strobel on the inside. It’s where the co2 marker is labeled. That foam Strobel is about 1.5 millimeters thick and it goes full heel to toe length of the shoe.

Your heel-to-toe offset for the shoe is 7 millimeters with 20.5mm in the heel and 15.5mm in the forefoot. 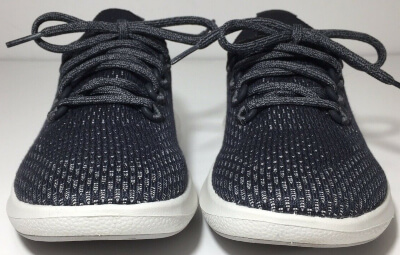 The upper is one piece made from eucalyptus trees, which is pretty interesting. They use renewable trees to make their fibers and then they knit them into this particular upper.

You’ll notice a few different knit patterns, one around the collar, one around the throat, and a different one in the toe actually where it seems to be where they tried to line it up to have some breathability and holes.

Honestly, the upper is really comfortable. If anybody who’s worn Allbirds has preached to you about it before, they will tell you how much they love the comfort of these shoes and I can’t disagree, it’s a comfortable shoe. 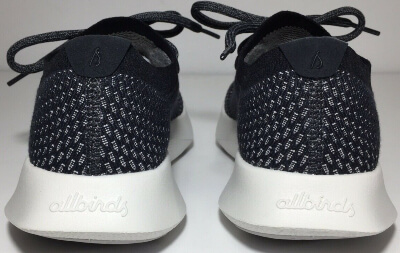 In the heel, you do have an internal heel counter which is pretty light and soft.

Inside the heel counter, we have a wool lining to lock down your heel to prevent heel slippage.

So, for all vegans out there, the Tree Dashers are not 100% vegan shoes because of that. 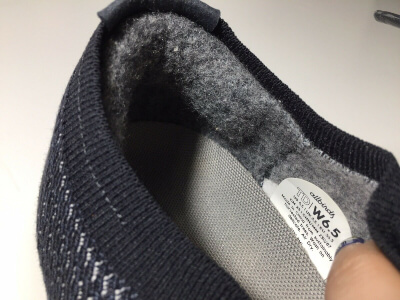 Then inside, there’s also a sock liner that is made from castor beans, which is another way that they’re trying to be sustainable. 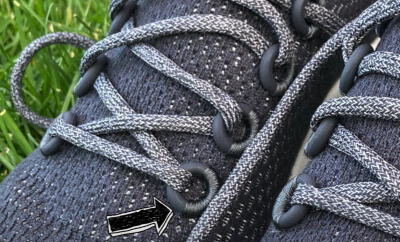 The lacing system is a classic Allbirds design which comes from one recycled plastic bottle.

There are four different lace loops that are actually made of a bio TPU and are sewn straight into the upper (pic 1.51), which is a little bit different than just a punched hole in the upper as you would usually get from other shoes.

The eyelets are held on to the upper with embroidery and I do have concerns that this is going to tear up as there are a few loose fibers here and there, but so far so good.

I have one pair that I’ve run 25 miles in and there’s been literally no issues with it.

This is kind of a wider shoe. So, despite having a one-piece upper, it’s not as snug as you’re going to get from a knit upper like the Epic React or something where it’s really locked in.

Despite the fact that the lacing feels fine on top of the foot, it doesn’t really lock it down completely. I think that might be because they’re trying to cater to all runners across a broad demographic.

So, if you have a wider foot or want that more stable platform, this is going to work totally fine.

Now for the weights…

The Tree Dasher is about 9.7 oz for a men’s size 8, which is not too bad, but it is a little bit heavier than I would expect for a model like this. If you translate that into a size 9, you’re getting over into the 10 oz range.

With so much foam and rubber on the shoe, I guess it kind of makes sense, but you’d hope it’d be slightly lighter weight, and maybe they can do that in the future.

So, despite having the one-piece light upper light and the fact that it’s a pretty simple shoe, it is a little bit on the heavy side.

So, can you run in Allbirds. Now you have the answer. You can run in the Tree Dasher but only for shorter distances. You can also run a 5k in these shoes but nothing more.