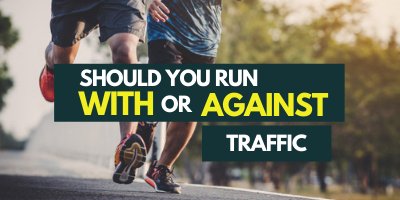 You’re pretty much always going to be sharing the road with other road users. So, do you run with or against traffic, I hear you ask.

Related: A Side Stitch. How Can You Prevent It?

Quick Navigation hide
1 Do You Run With or Against Traffic?
2 Should You Always Run Against Traffic?
3 How To Run Safely On Roads?
4 Tips For Successful Road Running
5 Advantages of Running On Roads

Do You Run With or Against Traffic?

Pretty much in most countries, the general wisdom is to run against traffic. Running in the direction of oncoming traffic. That will give drivers plenty of time to spot you especially on roads that have lots of bends and curves.

In some states, that’s actually the law.

So, if you are somewhere where they drive on the left like England or Ireland, UK, you probably want to run on the left-hand side.

That way you see what’s coming and you don’t have to trust your hearing, especially with electric cars.

So, it depends on where you live. But is it illegal to run on the road?

Sometimes, you’re not actually allowed to run on the road. So, you may want to check if there are any running on the road laws where you live.

Related: Glossary of Running Terms Every Runner Should Know About

Should You Always Run Against Traffic?

All that being said, is running against the traffic always the safest thing to do?

To answer this question, you need to put these things into consideration:

Every place where you have an intersection, you have to worry about cars turning right on red.

Similarly, left-turning cars coming from behind you are going to go across your path and they’re also looking for approaching traffic and maybe not paying attention to runners.

As you see, there are a lot of considerations that go into which is the safest side to be running on. You need to analyze the situation and use your own best judgment.

And that brings us on to the rules of the road.

How To Run Safely On Roads?

Safety first. Hopefully, by having these tips and tricks up your sleeve, you’re going to be running safely on roads.

Do runners have the right of way on the road?

Once the runner is in a marked crosswalk, drivers must yield the right-of-way to that runner.

Being aware of your surroundings also means being able to hear what’s going on around you. So, if you’re a runner who likes to listen to music or podcasts while you’re running, then maybe think about listening with one headphone or earbud in or on a very low volume. Or, you can run with Airpods Pro and turn on the noise cancellation feature. This feature gives you great sound quality without totally closing you off of your surroundings.

Related: How To Keep Earbuds From Falling Out When Running

Even in the daylight, try to wear something that’s bright that just catches the eyes of the drivers and the other road users.

We’d never advocate running on the actual road at nighttime. In fact, it’s best avoided during the daylight if you could manage it.

But if you are running at night, it’s probably a good idea to invest in a reflective kit or maybe something that’s got a flashing light behind you or on your arm to make sure you’re definitely seen.

Now, as well as being able to be seen while you’re running in dark or badly-lit roads or trails, you don’t want to be tripping down potholes. So, get yourself a headtorch and the bonus is you get to look like a Minion.

When wearing a head torch, look at the ground ahead of you not directly under your feet. Position the light in a way that you can see any hazards that potentially are coming up ahead of you.

Related: How Many Miles To Break In Running Shoes

Some Roads Are Safer Than Others

Even with bright reflective clothing and head torches, some roads can be safer than others. So, use common sense when you’re plotting your route and try to avoid badly lit areas or roads with no pavements even if that means repeating the same small loop.

Which brings us to the next tip…

Take a look at your Strava Global Heatmap. This will show you where is popular locally to use so you have confidence knowing that those routes are run regularly.

You could contact a local running group or community ahead of time and see if you can link up with one of their sessions. They know their neighborhoods best of all.

While we’re on the subject of tech, if you’re a little bit worried about going outside on your own, consider taking your phone out with you when you’re running. That way, if you do come up against any problems, then you can call someone for some help.

Or, if you don’t want to carry that, just write an emergency number down and pop that in your pocket.

I’m often surprised at how many people I see running purely indoors on the treadmills and hardly ever venturing outdoors onto the roads.

And you might be thinking that road running is purely for marathon runners or maybe people that race long distances on the road.

But actually, there are benefits that we could all have by just getting outside and giving it a go.

If one of the things that’s putting you off going outside and leaving the comforts of the gym is not having a restroom nearby or maybe not having an energy bar in your bag, then just plan around that.

If you plan a route that goes near your public bathrooms, that will solve that one, and maybe just put a bit of cash in your pocket, and if you do suddenly get hungry or need a bit of sugar, run by your local convenience store.

If you are used to doing most of your running indoors on a treadmill, then the shoes you use for that will be absolutely fine for running or walking on the road.

You want something that’s got a decent amount of cushioning because it is obviously hard.

Socks are something to consider. I find if I’m doing long runs on the road that my feet will start to get a bit of burning feeling, so it’s a good idea to invest in a good pair of socks.

Advantages of Running On Roads

The best part is that it’s free and you don’t need to spend money on a gym membership.

One of the advantages of running on the road are the routes are endless. And if you have a car, you can just jump in it and then pull out at a spot that takes your fancy.

If you’re worried about what to do with your keys, then why not just tie them onto your shoe or maybe just tuck them in your sports bra.

You can ask someone to join you for pacing, whether that’s in a car or on a bike and then they can pass you any fluids or any gels you might need along the way.

If you’re a trail runner, you’ve maybe been getting a little bit bored of having poor conditions underfoot or the bad weather.

Then why don’t you try a little bit of road running? And if you’re running between buildings or hedges, you’ll have a bit of added shelter.

Obviously, it does depend a little bit on where you live. But usually, you can jump in your car or hop on public transport and you’ll soon be able to find some roads suitable for your training.

One last thing, if you own a bike and ask yourself “should you bike with or against traffic?” Well, it’s different from running and walking and the general wisdom is to bike with traffic and not against it.

Well, we would love to know what road running is like where you live or any tips you might have, so please let us know in the comment section below.

And if you’ve enjoyed this, please share it with your friends and family.

So, that pretty much wraps this “do you run with or against traffic” pertinent questions. See you on the next one 🙂