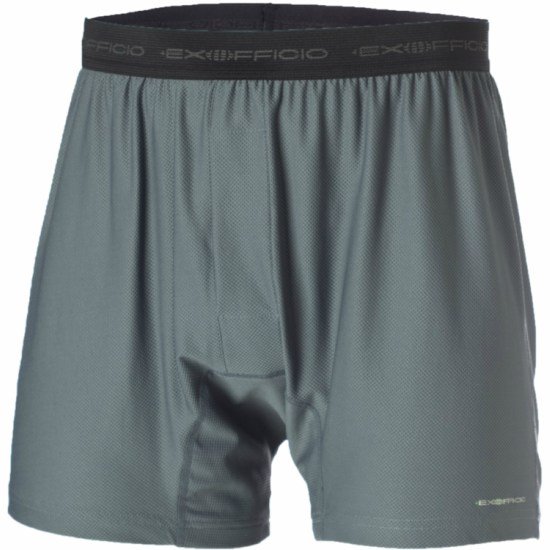 ExOfficio Boxer Briefs may not be your typical hiking gear item.

But, of all the gear I use on a regular basis, I consider these unique sports underwear among the most important items to have on a hike.

In a nutshell, these durable, odor resistant high performance and low maintenance underwear get the job done and are well suited for hiking and other outdoor adventures or activities.

This is going to be a LENGTHY gear review. I will not only give you my opinion about the product but will also provide detailed examples of the various types of hikes I’ve used these briefs on.

I’m a big guy. I sweat a lot when I hike. Especially on hot days. And though I carry a bandanna to swab away the sweat from my face and arms, that’s not any help for a sweaty crotch.

With regular underwear, I almost always get intense chafing on the inner thighs, when hiking. Even heat rash. Not a pleasant way to hike.

But fortunately, I happened to accompany a friend to the local REI store while she picked up a pair of ExOfficio bikini briefs. Even though she was a fit hiker, she told me her ExOfficios really made a difference on her hikes. So I bought a couple ExOfficio Give-N-Go Boxer Briefs on the spot and later ordered the regular Give-N-Go Boxers from Amazon.

I couldn’t believe the difference they made for me. On any type of trail in any type of weather, the ExOfficio Boxer Briefs performed remarkably well. Yes, even during hot weather.

Just like that, I stopped having problems with chafing and heat rash. I’ve also had good results during rainy conditions. Now I don’t ever hike without them.

ExOfficio actually does a decent job of accurately describing their boxers.

Take the Give-N-Go camping, fishing, hiking, paddling, exploring, backpacking or nowhere at all.

Based on my experience wearing both the ExOfficio Boxers and Boxer Briefs for over 4-5 years of hiking, I can say without hesitation that the product claims are accurate. Plus, they have held up extremely well over the years.

I’ve used my ExOfficio boxer briefs and boxers on various type of hikes. From hills like Mt Rubidoux and the Hollywood Sign, to mountain peaks like Mt Baldy, Mt San Jacinto. From waterfall hikes like Fish Canyon, to stream crossing hikes like the Bridge To Nowhere.

Hot or cold, the ExOfficio underwear performed well. That’s easy to say, of course. But what about specifics? No problem. I’ll include a few detailed examples from a few of my hikes where these sports underwear really proved their worth to me.

This was probably my ultimate test for the ExOfficio boxers. Me and fellow day hiker Kim, drove up to Idyllwild, California, to meet friends for a weekend campout and morning hike.

The plan was to lounge around the campground Friday night and then hike to Suicide Rock in the morning. Suicide Rock is a dramatic and beautiful rock formation in the San Jacinto Wilderness.

We pitched our tent late Friday afternoon at campsite 51 and enjoyed the peaceful calm. I wore my ExOffico boxers under a pair of cotton denim shorts. I planned to change into my hiking shorts in the morning, before the Suicide Rock hike.

Before long, the peaceful calm turned into a loud and boisterous fiesta. Campsite 51 somehow became Area 51 and everyone decided that was the place to be. We gathered around the fire pit drinking beer, wine and other spirits and eating fire pit cooked foods.

And as you might expect, we had a great time but stayed up late enjoying the vibe. Needless to say, most of us woke up a bit groggy in the morning.

The Hike to Suicide Rock

We had to rush to the trailhead to meet friends who were coming up just for the hike. In the process, I ended up wearing the clothes I had slept in. The same clothes I wore the night before. Blue denim shorts and a cotton t-shirt. I knew you weren’t supposed to hike in cotton clothes. But there I was at the trailhead, wearing cotton.

I had brought a stick of Glide for the weekend, just in case. Unfortunately, I forgot to put any on in the morning and left it at the tent. I remembered the heat rash and welts I got the last time I hiked in denim. But at least this time I wore my ExOfficio underwear.

It was a large group. We gathered at the trailhead and headed up the trail. Before long we were all having a great time, laughing and carrying on. And the views from Suicide Rock were superb.

After the hike, we had lunch in Idyllwild and then returned to the campsite. Amazingly, even though I sweated quite a bit during the hike and wore denim shorts, I didn’t suffer any chafing whatsoever. The ExOfficio boxer briefs had done their magic.

Back at the campground, I planned to utilize the funky campground showers and get into some clean clothes for the night. But again, our group of happy hikers really got into the mood around the campfire. More beer, wine, and other spirits. And no shower or change of clothes.

By the time I woke up Sunday morning, I still wore the same blue denim shorts, t-shirt and ExOfficio boxers that I had worn since Friday.

For a dude like me who requires a nightly shower, this was a big deal. I expected some chafing now. But even after all that sweat, activity and grunge, my legs were still fine. I finally got a shower back at home. I was amazed by how well the ExOfficion boxer briefs had performed throughout the weekend.

Kim and I attended the annual Bluesapalooza festival in Mammoth, California with a group of friends. We planned to hike somewhere in the area if we got the chance.

The festival is always held the first weekend of August and we knew it would be hot. I brought my ExOfficio boxer briefs just in case but forgot to wear them during the festival.

But by Sunday morning I had already developed chafing on my inner thighs. Apparently just from walking back and forth at the festival. I realized that I should have worn the ExOfficios, but figured it was too late to do anything about it. So we hopped in the jalopy and headed south.

Before long, we stopped for lunch at the McDonalds in Lone Pine and on a whim, decided to drive up to Whitney Portal and maybe hike to Lone Pine Lake.

It was well after 1 pm with temperatures in the mid-90s. But Kim had never been to Lone Pine Lake and for some reason, I was getting mesmerized by the jagged mountain peaks in the distance.

Lone Pike Lake is as far as you can go on the Mt Whitney Trail without the special permit and we were in the area. I told her we could at least go to Whitney Portal and see how we felt.

We picked up a few supplies at a local grocery store and drove on up. I still wore my blue denim shorts and regular boxer briefs. After finding what appeared to be the last parking spot in the Mt Whitney overflow parking lot, we decided to do the hike.

I changed into my ExOfficio boxers and hiking clothes at a pit toilet and by 3:00 pm, we started up the Mt Whitney Trail. The chafing on my thighs concerned me a bit. But I also knew we wouldn’t get out this way very often. So we decided to give it a try. It wasn’t nearly as hot up on the trail, but still hot.

I expected the chafing from the Bluesapalooza festival to get worse. Even with the ExOfficio underwear. But surprisingly, the chafing dissipated with every step. By the time we finished the hike, it was pretty much gone. I was comfortable all the way back to Southern California. Once again, I was amazed by how well the underwear performed.

Icehouse Canyon Trail in the Rain

For this hike, we knew in advance we might encounter rain somewhere on the trail. Kim and I planned to hike with a group to Cucamonga Peak, weather permitting.

It was cool but not raining as we gathered at the Icehouse Canyon trailhead and started up the hill. We made good progress, but it started to rain just before we reached Icehouse Saddle.

Most of the group turned back at the Saddle due to the rain. Kim and I hiked with a guy named Derek, well behind the group. Derek was training for Mt Kilimanjaro and planned to do Cucamonga Peak regardless.

As he put it, there would be no turning back on Kilimanjaro. So why turn back on Cucamonga Peak? By the time we got to the Saddle it was raining hard.

I wore a fleece jacket underneath a “water-proof” windbreaker and was actually reasonably warm. But my hiking pants and Ex-Officio Boxers were thoroughly drenched. Even so, we followed Derek about a half mile up the Cucamonga Peak Trail until Kim started shivering pretty bad.

Me and Kim get drenched on the Cucamonga Peak Trail

We decided to turn back. We bade Derek farewell and hiked back down in our wet hiking clothes. Fortunately, it stopped raining before we got back to the trailhead.

I again expected to have some type of chafing on my thighs due to the drenched pants and underwear. I mean, how much moisture can ExOfficios wick? But sure enough, I didn’t experience any chafing problems during or after the hike. I was definitely impressed.

By now, you know I’m a fan of ExOfficio underwear. The boxer briefs are definitely not cheap. And neither are the ExOfficio Bikini Briefs for the ladies.

But for me, they are worth every penny. I would prefer that they were more affordable. Even so, ExOfficio underwear definitely earns a Five Star rating and makes an excellent addition to your hiking gear.

You can probably get ExOfficio sports underwear at your favorite sporting goods or outdoors store. Or you can pick them up from Amazon.