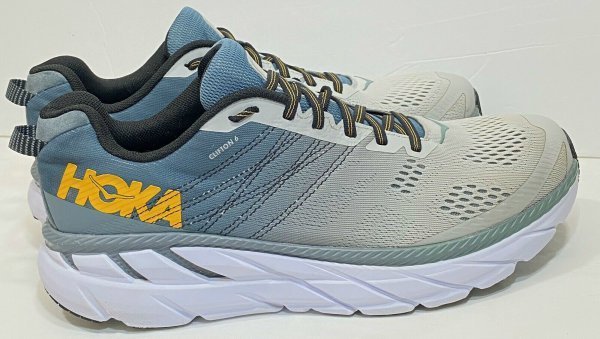 Today, we’re going to be doing the Hoka Clifton 6 review.

Runners who have run in the Clifton in the past used to have a little bit of a love/hate relationship with this shoe.

Basically, there were a lot of good things about the Clifton Original like the lightweight and the high-cushion level, which were some things that really changed the running shoe industry.

But what people had forgotten is there were some things that were pretty tough about the Clifton. The fit was a little bit sloppy and the material wasn’t that amazing.

By the time they got to the 5th generation, they had a shoe that was by all measurements a better shoe than the OG Clifton.

Related: Hoka Clifton 6 vs 7 – The Clifton Series is Finally Back On Track

How it all started

If you’re not really familiar with the Hoka Clifton at all, I guess I can even give you a little bit of background on how this brand came to life.

Hoka started out in France. Hoka was looking for a shoe for long-distance runners that would kind of give you that rolling feel from your heel to your toe.

Historically, we’ve heard the great story about how the brand started. The founder was a developer of skis and he was watching a marathon on TV, I believe it was Boston.

He noticed how much further ahead the wheelchair athletes were from the runners. So his idea was ‘we need to put wheels on shoes’.

Just that simple, watching a race thinking about what separated different athletes on the race, he was able to kind of visualize with his background in manufacturing how to manufacture and put up different technology in a shoe that would give runners more of a ‘rolly’ feel to it.

So that’s what Hako really became famous for, that rolling feel through the Meta Rocker geometry.

In my opinion, Hoka has kind of taken all the best aspects of the Clifton over the past six years and kind of put those learnings into one place and made a pretty terrific shoe.

So let me tell you what I think and then I’ll look forward to hearing your thoughts on it in the comments section below.

What you’re going to see on the bottom is a two-part base to the shoe. Basically, everywhere that it’s white is a softer more pillowy type cushion while the red areas are a harder kind of carbon-based rubber.

So what you’re going to get on that carbon-based rubber is that’s where your wear is typically going to be.

Typically, runners are either going to heel strike or land on their midfoot. For heel strikers and midfoot strikers, Hoka has added a little bit of that carbon in the back and in the midfoot area of the outsole.

Hoka has actually spread the carbon rubber out a bit and changed the tread design on the Clifton 6 a little bit where they’re putting this high-abrasion rubber trying to get rid of some of that typical look of wearing off in the midfoot area.

The challenge that the Clifton has is that they’re trying to keep it super lightweight while also giving you a little bit more life boosting its durability.

Trying to get over a few hundred miles for a shoe, basically, this amount of rubber does a pretty good job of that.

After four generations or so certainly in the Clifton 4 and 5, Hoka started to make the midsole material quite a bit harder.

I believe they’re actually using the same rubber they use in the Hoka Bondi series in the Clifton.

But in the Clifton 6, Hoka has certainly softened that up quite a bit. So what Hoka has done is they reverted back to the original feel of the Clifton.

You’re going to land in this shoe and it’s going to compress under your body weight making this the most pillowy Clifton that has kind of almost a Tempurpedic type feel to it.

I think it feels a lot like that first-generation Clifton where you’re really landing in it and you’re feeling that your weight kind of pushes down and then bounces back up.

As with all Hokas, you’re sitting down inside like a little bucket and that gives you a very stable side-to-side feeling.

Now in a shoe like the Clifton, you’re kind of compromising some of that lateral stability for that soft feel. And then since you’re sitting inside it, it gives you more of that stable feeling.

Who it is for

I would not use the Clifton 6 for something like bodyweight gym workouts or anything where you’re going side to side in the shoe.

So what it’s great for is running forward in a straight line, walking around all day, and any time you’re putting that comfort over an actual accurate stable environment.

It’s not like you’re going to fall off the side of this shoe because you’re right down inside of it very comfortably.

That’s important to point out when you have a shoe whose stack height and cushion is high and soft.

Again, I think we’ve gone back to the original Clifton as far as comfort underfoot.

Aside from the midsole, Hoka has really made an improvement in the comfort over the foot.

They’ve put in some really nice mesh top on this. It’s two layers bonded together and you can kind of see the secondary layer. So the upper feels like one layer throughout.

The toe area has got some pieces that add some stability and security right along the toe to give it its shape. All of this just gives us a shoe that really hugs your foot right in.

Again, the material hugs around your foot, and what you’re getting is locked in in the heel, locked in over your arch, and then a nice kind of compliant upper that allows your toes to move around.

One of the things that we’ve seen on past versions of the Clifton, especially in the four and the five was a very high arch.

Because they’ve softened up both the cushion and the upper material on the Clifton 6, that arch is much less noticeable.

From personal experience, I would have to go to the Clifton wide in the 4 and the 5 because of that protruding arch and because the upper was quite a bit stiffer.

In the Clifton 6, I’m back down to the normal width of the shoe. They still offer a wide in the Clifton and that’s going to add I think two millimeters on the outside to get it to a 2E, but it’s not as necessary in the Clifton 6 as it was for folks without that super high arch in the Clifton four and five.

This is not a foot-shaped toe box like the Altra Paradigm 4.0. This is a traditional tapered toe box, but the material used on the upper is compliant enough to allow your toes to move around.

I tend to think of myself as having kind of a traditionally shaped foot that’s not too wide and not too narrow and the Clifton 6 just fits me very well.

Again, you put those two things together and what you get is a lightweight shoe with a lot of cushion. When I say lightweight, Hoka advertises this as being a 9.oz shoe.

When you look at all the websites, they’re all reviewing the regular D width shoe and so if you go to a wide, you’re adding on some weight just because you’re adding more material.

Basically, the tongue has a little bit of padding. When the Clifton started out, the tongue was a paper-thin one and some people complained about how that rubbed them and how it moved around.

Now the tongue on the Clifton 6 is a little bit thicker than before. It holds on to your foot very well and it works with the insole which is actually a pretty thick high-quality insole.

The insole is about five millimeters and really wraps your foot up and kind of highlights that really comfortable feel.

A lot of runners tend to compare the Hoka Clifton 6 to the Rincon. This is definitely a good question.

For the sake of expediting your decision process, if you are looking for a very soft shoe that holds you in, gives you a little bit of hug, compresses under you, and gives you that great all-day kind of cushy Tempurpedic feel, the Clifton 6 is the shoe for you.

And if you’re looking for a shoe that has a little bit more spring to it, a little lighter weight, and maybe a little go-faster, then you’re going to probably want to take a good look at that Rincon.

The other decision point between the two shoes is that this Clifton is about $15 more expensive than the Rincon.

The Hoka Clifton 6 isn’t the longest wearing in the Hoka lineup, but you can get three to five hundred miles out of it depending on the surface you run on and your actual weight. I heard some runners could get even 600 miles out of it and that is cool.

Because the Clifton 6 is a softer cushion, it is going to tend to pack down a little bit. So towards the end of that lifespan, this shoe is going to feel like it has a little bit less depth to it.

I really think it’s worth your time and money and if you have a local store near you, try on the Clifton.

If you have moved away from the Clifton over the past couple of years, the Clifton 6 is going to get you back in feeling like you felt five years ago when you put it on.

I think it’s worth a shot and it kind of has that WoW feel to it.

Thank you very much for reading this in-depth Hoka Clifton 6 review. Please post any questions that you have down below.