Today I’m excited to bring you the Hoka One One Bondi 5 review.

Let’s get right into it …

When you think Hoka and you think a lot of cushion, you’re going to think about the Bondi. This is a 4mm low drop comfort cushioned road running shoe from Hoka One One. At 37 millimeters of stack height, this is about as much cushion as we’re going to get.

Related: Hoka One One Clifton vs Bondi

Hoka One One Bondi 5 Review

The first thing you’re going to see with any Bondi is that regardless of what position it’s in, whether it’s a speedy shoe, a long-distance shoe, a comfort shoe, a training shoe, Hoka’s have about half as much cushion as any other shoe on the market. 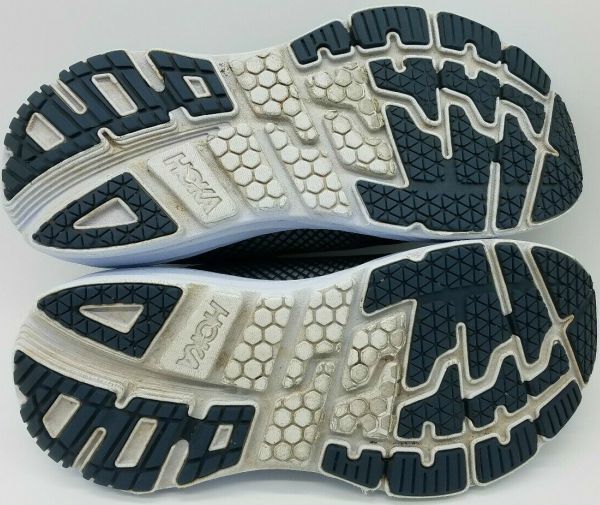 The white areas are just bare EVA and they tend to wear out a lot faster. We tend to get great mileage out of the Hokas in general and the Bond is a really high mileage shoe.

So if you’re getting let’s say 400 miles out of a typical shoe, you should have no problem getting five to six hundred out of your typical Hoka.

They just do last quite a while with the extra cushion that doesn’t compress as much with this hard carbon strategically placed on high-wear areas.

Up through the Bondi 4, what we saw was the tread designs on the bottom actually led to this soft-wearing rubber really to wear off quickly.

So for midfoot to forefoot strikers that used to have portions of the Bondi wear out quickly on the bottom, you’re really not going to see that much on the Bondi 5. This should be a nice long life shoe for you.

Basically, there are three ways that you can get rubber into a shoe.

1. Brands compress the rubber by taking a big piece of rubber and pushing it right down and carve it out.

2. They pour rubber into a mold and that’s called injection molding.

3. They use TPU which is kind of the most recent technology on that.

What Hoka has chosen to go with on the Bondi 5, as they have with all their previous Bondis, is a compressed rubber midsole.

So what you’re going to get in this is a very lightweight shoe for the amount of cushion that it has.

So what Hoka does really well with all of their shoes is they create kind of a bucket seat.

So Hoka created kind of a bucket effect where your foot sits down inside that oversized midsole and not sit on top of it. What that gives you is a really stable consistent landing in the shoe.

One of the challenges before Hoka came along, is if you had a lot of cushioning, you’d be on top of that cushion which is kind of like you’re on stilts. So the higher the stilts, the harder it was to stand well.

So Hoka carved out a piece so that while you have a lot of cushion underneath you, you’ve got a lot of supportive material on the sides, which allows you to be up high but not be wobbly back and forth.

There’s really no shoe in Hoka road lineup that does that quite as well as the Bondi 5 specifically.

As far as the weight, Hoka quotes that just over 10 ounces. So, Hoka, like every other manufacturer in the country, typically weighs their shoes in a men’s size 9.

So the Bondi 5 is a light shoe. Basically, if you want to go out and run a sprint or a 5k, you’re going to be carrying around a lot of extra weight with the Bondi 5 versus a shoe that’s probably a little bit better for that application.

Who is it for

The Bondi 5 really shines as a long-distance or an over-distance. Over-distance could be a three to five-mile run on a Friday when you’ve been working out all week and your legs are just tired.

It could also be your long run if you’re training for a marathon or it could be your daily run if you have high-mileage weeks.

But basically, what this shoe is designed to do is to protect you from the impact from the ground versus giving you that speed and agility.

The Bondi 5 is a very wide shoe which a lot of runners seem to love. The wider the shoe, the more your weight is going to disperse across the tread.

One other great use for this Bondi is it’s really one of people’s favorite walking shoes. It’s great for folks that aren’t running but want a shoe that lets their feet feel good all day long.

This is the type of shoe you can put on in the morning, walk around all day at work, out on the greenway, or out in the neighborhood and really not take it off till the end of your day and it’s time to go to bed.

The Bondi’s really pillowy cushion and really appeals to a lot of people that have some foot pain like Plantar Fasciitis because it just gives them that little extra they need to get up and go out and feel really good about it.

The other reason that people love the Bondi for walking is unlike running, in walking you’re always going to hit your heel. 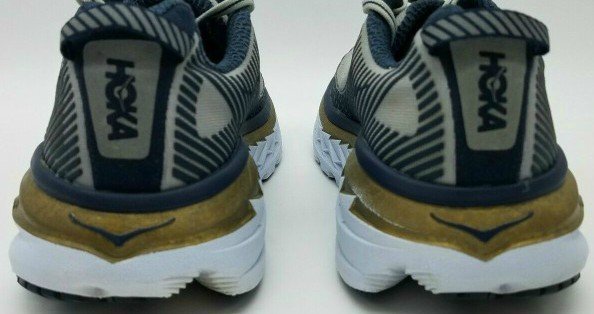 Because you’re always going to hit your heel, Hoka added this nice bevel right to the back and it’s actually got a little bit of a bevel off to the side.

Most people pronate just a little bit and they land in a supinated position which would land them on the outside corner and roll in on the shoes.

So the Bondi 5 has kind of a double bevel, one coming through the middle so you can roll forward and one coming from the lateral side to roll you right towards the center of the shoe.

Then obviously, with the Bondi’s rocker bottom, you’re going to roll right off the front giving you a really nice heel-to-toe transition.

So in addition to being a great long-distance shoe, this is a really great walking shoe.

One other thing that Hoka does to differentiate itself from anyone else is they have what they call, as I just mentioned, a meta rocker.

To put that in terms that we both understand and can enjoy, basically it just means the roll off the front of this shoe. So, every Hoka kind of rolls up from your metatarsal heads.

The reason that you need a rocker on a shoe like this is that when you have a lot of cushion, you lose some of that ability to toe-off with your big toe.

The toe-off phase is where you get your power when you run and that’s where your energy goes out.

So if you have 37 millimeters in the back and 33 millimeters at the metatarsals, you’re going to want to rock that right up so by the time you get to your big toe, you’ve got quite a bit less cushion there where you can really push off with your toe and get some push off of it.

In addition to being comfortable when you land, that meta rocker serves a purpose as far as getting you that energy into the shoe.

Pillowy vs Responsive vs Springy

The Hoka Bondi 5 offers a pillowy ride. The thing I want to point out is whether you have a pillowy ride, a responsive ride, or a springy type ride, generally, you don’t run any faster in one or the other except at the very extremes.

If you’re sprinting, you’re going to want to have a very responsive ride that doesn’t allow any compression.

But beyond that for normal humans, you’re going to run at about the same speed in a pillowy shoe as you are in a more responsive springy shoe.

What it does do is it makes a heck of a lot of difference in how you feel when you’re doing it.

So I’m going to put that on the personal preference side of the equation and this Bondi is on the pillowy side. You’re definitely going to sink in and really feel comfortable in this shoe.

Hoka calls this a 3D Puff Print Frame. Basically, it is this engineered mesh that brands have been introducing.

The upper doesn’t have a lot of plastic overlays going across the shoe. This engineered mesh is knitted in different thicknesses within the mesh itself and provides the support that you need in a shoe.

The puff pieces on the outside give a little bit of stability and make the shoe a very consistent shoe that’s going to retain its shape for a long time, which is what we all want there.

The combination of the engineered mesh upper and that bucket seat in the midsole means that even though this is a very large shoe where you’re high off-road, you can get a lot of very nice stable consistent landing in the Bondi. 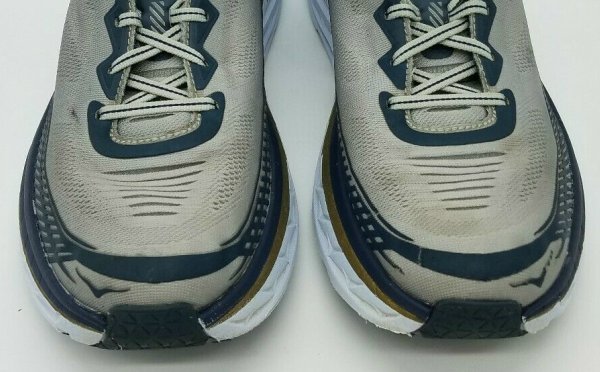 The last piece as far as the upper goes, the Bondi 5 is nice and wide around the toes and then it does taper in just a little bit.

So if you have a narrower foot or a foot that tapers towards the top a little bit, this is going to fit you really well.

Hoka also makes a wide in this which is going to add a couple of millimeters on the outside and it’s going to give you just a little bit more width as you go throughout the shoe.

So for folks with a little bit more substantial feet, they may want to give that a shot. A good store will have that in both the standard and the wide width of course, but the best option is online where you can actually find every size and width.

I really do like the way the Bondi 5 fits. It’s a little bit narrower in the heel and in the midfoot to hold and give you that nice consistent feel around your heel and your instep.

Then it widens out a little bit and then tapers in at the end.

I find the Hoka Bondi to fit pretty true to size and some people have had to size up just because the taper is so dramatic compared to the Bondi 4 which was a little bit square in the end.

Overall, I’ve got really positive feelings. It’s actually one of my favorite running shoes for long runs and for recoveries.

So, in a nutshell, I love the Bondi 5. It’s a great shoe for all of your longer distances and for anyone that just wants to get out there, walk around, and have a great time.

Hoka One One Bondi 5 Review