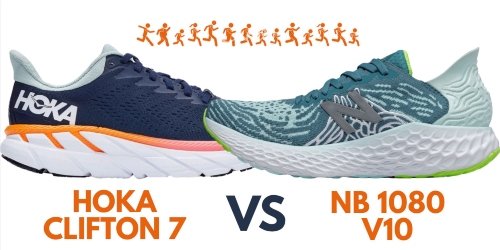 This is a special comparison review series of the Hoka One One Clifton vs New Balance 1080.

Let’s cut to the chase…

I find these two shoes relatively closely matched in terms of price and also use case.

Hoka One One Clifton vs New Balance 1080

First off, if you’re in a hurry, these are the main similarities and differences between the Hoka One One Clifton 7 and the New Balance 1080v10.

We’ve also compared the Hoka Clifton and the Hoka Bondi. Make sure you check it out.

We’ll start with the upper first. There’s a partial bootie construction in both shoes with some elasticated pieces that go around the tongue that lock the tongue around the foot hopefully holding it in place so it doesn’t slide around during your run.

Both shoes have some quite padded tongues. There’s one slight oddity in the 1080v10 with the tongue only really coming down just before the first three eyelets of the shoe.

The rest is this stretchy knit upper that they use on the 1080v10 called Hypoknit, but don’t worry it won’t hypnotize you.

It’s very stretchy in the toe box like a knit upper really, which becomes clearer if you push your hand up through the toe box.

The rest of the upper though on the 1080 is far less flexible.

The actual ‘N’ on the new balance shoe is quite rigid actually that it almost looks like a piece of metal like they’ve just sort of chopped out an end out of some metal sheet and placed it on there.

I do find the Clifton 7 upper a little bit more breathable certainly in warmer conditions. The Hoka has certainly a simpler upper with less overlays.

So, certainly having less overlays on Clifton 7 seems to give it a little bit of a weight advantage.

The heel areas in both shoes actually differ quite considerably. There’s a very distinctive heel flare in the 1080v10 and the New Balance 860 but not in the 880.

There’s quite a considerable counter at the end but very little padding around the Achilles area.

It kind of looks a little bit like the New Balance Beacon 3.

The Clifton 7 also has a heel flare as well, but there’s much more padding around the heel and a very solid heel counter.

There must be a really solid piece of plastic in there. So, if you’re a fan of much more padded heel areas, then maybe the Clifton 7 is for you.

I found the lockdown to be quite customizable in the 1080v10. We’ve got a few more lace eyelets towards the bottom of the tongue.

I did find a runner’s knot was needed in the 1080 mainly because of the very elasticated laces that New Balance have used with the shoe.

Actually, the more and more I’ve used the Clifton 7, the upper has given a little bit, and now there’s an extreme amount of upper to deal with.

I’m having to cinch the shoe down quite a bit to actually get a good lockdown. So, definitely, a runner’s knot is required.

Taking all of this into account, I do feel that the New Balance 1080v10 should take the crown in this comparison for upper.

A very interesting observation was made when I took the insoles out of both of these shoes. Both of them feature an Ortholite insole which is very cushioned.

I actually weighed the insoles and they came in at 1 oz, which is a lot of weight when you consider it.

I think some of the perceived cushion from both shoes does come from that Ortholite insole.

Certainly, taking the insoles out of the Hoka Clifton 7, it actually really doesn’t feel that cushioned at all.

I find the 1080v10 midsole far more cushioned than the EVA one featured in the Clifton 7. So, there’s a more compressive ride in the 1080 at the expense of a heavier shoe.

Over my 100 miles in the 1080v10, I certainly found that the greater heel-to-toe drop in the shoe was quite apparent and a slightly more exciting ride than the Clifton 7.

Aside from my daily commutes and easier daily miles, I certainly had quite a few faster sessions in the 1080v10.

So far utilizing the Clifton 7, I have to say that the midsole feel isn’t really that different to the Rincon from last year. Albeit perhaps a little bit heavier, I just feel that the EVA is just lacking a little bit in comparison to the New Balance offering.

The Clifton just doesn’t feel like a shoe that I really want to pick up the pace in.

The Clifton 7 is a nice shoe for recovery or easy miles but nothing else aside from that.

So, for me, it is an easy win for midsole for the 1080v10. It’s just a more cushioned and responsive midsole in this one.

There’s slight wear in the outer section of the heel and a little bit in the very front of the shoe.

Aside from that, the 1080 is looking really great in terms of the outsole.

I would say that the Clifton outsole is looking better at this point in my testing against the Rincon from last year.

Aside from a little bit of wear already on the exposed midsole, there’s just way more rubber up in the midfoot and the forefoot and it’s holding up really well.

I think the slight weight advantage that the Clifton has over the 1080 is partly due to the blown rubber on the outsole of the 1080.

You have about an ounce difference between the two models and I think this is mainly where that weight difference is.

I found the traction in the 1080 great in my winter testing of this shoe. At times, it felt slippery on some smooth stone surfaces especially very wet slabs. If you go anywhere near marble on the New Balance 1080, it’s going to be a slide fest.

The Clifton’s rubber outsole has provided some good grip on my typical trail and pavement base routes.

Traction is ample and the wider landing platform is certainly very welcomed by a man with energy sapped legs like me.

In terms of outsoles, I don’t think there’s an awful lot in it so I’m going to call it a draw.

The Hoka Clifton 7 is about 10 dollars cheaper than the New Balance 1080 although you can find both shoes at discounted prices now.

So, in terms of value, I think the slightly more versatile New Balance 1080v10 takes it for me. I just feel it can handle more than just sort of daily easy training.

You could do some interval work in this, I don’t see why not, and it will handle some long runs, too.

I think it’s perhaps the heel-to-toe drop just left me feeling a little bit more energized when using the 1080.

It’s a shoe where I just felt that I could lift up the pace if I wanted to.

The Clifton 7 sadly at this point for me just doesn’t really feel like a shoe that does want to go any faster than easy-paced miles.

I’m very aware that not all runners can afford a huge array of shoes in their rotation for all different types of runs and thus value and versatility go hand in hand.

I think there’s improved tech in terms of Fresh Foam X midsole on the 1080. The softer upper is a little bit more accommodating, which means that the 1080v10 is the more rounded shoe here.

If you put aside that it’s quite a bit heavier in my size, I feel that it comes out on top in terms of value.

There we go, guys. This was my comparison and breakdown of the Hoka One One Clifton vs New Balance 1080.

Let me know your views and thoughts on this one in the comments below.

One final request guys, please don’t forget to share this comparison with your running buddies.

Happy running everybody and see you on the next one.