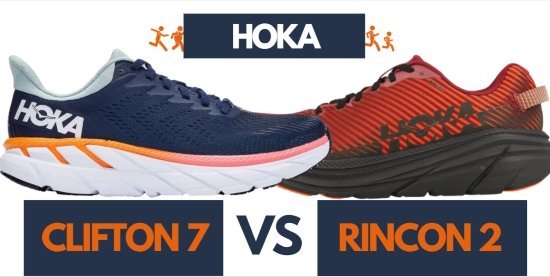 The Hoka Rincon 2 vs Clifton 7 are two very popular daily trainers from Hoka in 2020.

By the end of the article, I’ll tell you which shoe I would buy if I had to choose just one.

When I was getting kind of back into running in a bigger way, I honestly can’t remember meeting a single runner that did not like the Clifton One including myself.

Hoka One One kind of really revolutionized the running shoe landscape with respect to a softer midsole and a higher stack height.

Now we are already into the Hoka Clifton 7 lineup and it’s just amazing to see the evolution of the Clifton line.

Then out of nowhere in 2019, the Rincon revolutionized the game again at least within the Hoka lineup with respect to creating a faster and a little more responsive shoe compared to the Clifton series but also a shoe that you could take out for a long run because it does have that stack height to protect the legs.

Both the Hoka Rincon 2 and the Clifton 7 have a 5-millimeter heel-to-toe drop and both of them have a stack height of 29mm in the heel and 24mm in the forefoot for men and women.

As you see, the Rincon 2 is about an ounce lighter than the Clifton 7, which is not a huge difference, but it’s important to know for people who love the lighter version of both shoes.

However, the Clifton 7 did lose .3 ounces from the Hoka Clifton 6, which shows the Clifton series is just trending in the right direction.

Actually, it gets more and more difficult for companies to be able to keep cutting down the weight of their shoes, but Hoka were able to pull it off between 2019 and 2020 for the Clifton lineup.

Weight battle: The victory goes to the Hoka One One Rincon 2

Both shoes have mesh uppers, but I think the Clifton 7 is a little more breathable. What Hoka did especially through the toe box is add these little tiny slits in the toe box just to help that breathability.

Also, the lockdown and comfort on the Clifton 7 is absolutely amazing.

Another thing you might have noticed on the Clifton 7 is they lost the pull tab in the back but they gained this interesting heel flare.

As far as these new heels flaring out, New Balance and Nike are both trending in some of their daily trainers toward this heel flare, also known as the elf heel counter.

Sometimes, I don’t know if it’s completely necessary to have that heel flare, but overall, the heel flare feels great in the Clifton 7.

Upper battle: I’m going to give the victory to the Clifton 7. But if the pull tab is really important to you, then the Rincon 2 is your winner

The midsole on the Rincon 1 and the 2 stayed exactly the same. The only changes were to the upper.

There was a time when the Clifton series lost its identity. Everybody loved the softness of the Clifton Original, but with the latest iterations, the Clifton has become stiffer and stiffer ever since.

The good news is the Cliftons 6 and 7 are the closest to the Clifton Original in terms of the plushness of the midsole.

The Clifton 7 is unbelievably soft and maybe too soft for some people. So, if you like ground contact feel, if you like a little bit of responsiveness through your daily trainer and even to a certain extent your easy day shoe, I would say don’t get the Clifton 7.

The midsole is just too soft and it kind of feels like the clouds or pillows under your feet.

The Rincon 2 is also soft, but somehow Hoka is pulling off better energy return through that Rincon midsole through your foot strike.

Midsole battle: For me, when it comes to the midsole, the victory goes to the Rincon 2.

That is why the Rincon 1 of 2019 kind of swept the running shoe world by storm because it could accomplish so many tasks within your training plan.

Believe it or not, I’m going to give it a tie. I know I don’t like to do ties, but I love that they both have exposed EVA and just the right amount of rubber to help protect the outsole a little bit.

You know, when you add too much rubber on the outsole, the weight of the shoe starts to climb.

For the fit between the two shoes, I went fit true to size in both shoes with no issues with the toe box either or the midfoot as far as being too narrow or too wide.

As for comfort, sometimes you’re not necessarily looking for comfort, but if you do and if that’s part of your running shoe purchasing strategy, I have to give the victory to the Clifton 7 in the upper and the midsole.

The upper on the Clifton 7 is quite a bit more plush and that’s why the weight of the shoe is higher.

So it’s give-and-take. More comfort usually translates into a little heavier shoe because, in the case of the Clifton 7, they put more padding into the upper and usually a little more stack height through that midsole.

For my positives between the two, for the Clifton 7, I love the fact that they streamlined the upper with respect to losing overlays.

Overlays are usually added for branding purposes or to add a little bit of stability through the heel counter or the midfoot area to create better lockdown.

What I love about the Rincon 2 is the versatility of the shoe. Winner winner, chicken dinner.

When it comes to durability, what I’m talking about is when the full benefits of the cushion of that midsole start to dissipate rapidly meaning the shoe starts to feel dead or you basically start to feel the pavement and the concrete through your foot strike more than you would like.

So that’s what I mean by the durability prediction.

I’m not sure how much these shoes cost right now, but the Rincon 2 is about $15 cheaper than the Clifton 7.

So, for the price, the victory goes to the Rincon 2 especially since it can accomplish many different tasks within your running plan, your training plan, easy days, a little bit of tempo days, daily training, middle distance or long runs.

If I had to pick only one shoe

Again, I love Hoka for the fact that when I want to baby my legs, I often reach for Hokas.

I love the soft midsoles when I want to just chill out a little bit and relax especially since I live in the city and I do have to run on asphalt, pavement, and concrete a  lot.

But if I had to pick only one shoe, which one would it be?

This is a really difficult decision, but I would go Hoka One One Rincon 2 if I had to pick only one for 2020.

Final battle: I would pick the Rincon 2

That pretty much wraps up this Hoka Rincon 2 vs Clifton 7 comparison review.

2 thoughts on “Hoka Rincon 2 vs Clifton 7 Comparison – If you Could Only Get One Shoe?”