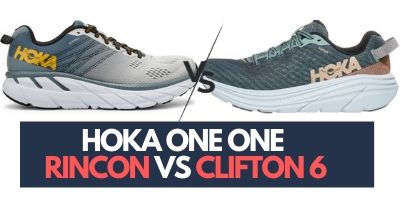 But which one is better? A typical answer, it depends on how far you jog, how often, how fast …

I thought that it may be worthwhile just having a one-on-one conversation with the Rincon and the Clifton.

Those two shoes are probably the most easily confused and the ones that most people are going to have the most questions on.

The Hoka Clifton 6 is softer than the Rincon and feels great every time you put it on no matter the run. The Hoka Rincon is firmer, faster, and cheaper.

The Rincon has a lighter and more nimble upper while the Clifton 6 has a more supportive and softer upper that gives a bit more of an accommodating fit.

The Hoka Clifton 6 is wider and the Rincon is narrower.

The Clifton 6 is more supportive, more durable, and has more cushioning for the pushing than the Hoka Rincon.

The Hoka Rincon is one of these 10 best athleisure shoes.

Before I get down to the nitty-gritty on how the Rincon and the Clifton 6 actually feel on your foot, I’m going to run through some similarities between the two shoes just to understand where the shoes should sit in your arsenal.

So the Rincon is obviously a brand new shoe in Hoka’s super lightweight arsenal but looks pretty much exactly the same as the Clifton 6.

So what are the similarities?

Not a lot has changed in terms of the actual structure of both shoes. Both shoes have a 5-millimeter heel-to-toe drop. So if you like that 5-millimeter drop in your Clifton 6, 5, 4 or even the Clifton 1, that’s exactly what you’re going to get in the new Rincon.

As I said, the men’s Rincon stack height and the Clifton 6 is exactly the same.

However, in the Rincon for the ladies, it does drop 1 millimeter from the Clifton 6. This means 1 millimeter closer to the ground, which really isn’t a massive difference.

Well, you know that rocker feel you’re getting with the Hokas, the Clifton 6 has that feeling. It’s a preference thing. The Rocker design kind of guides your foot through transition.

The Rincon actually has it too. It features just a slightly revised Meta-Rocker design, but it’s a slight rocker and not as noticeable.

Again, it’s nothing super different to actually how the Clifton 6 feels. The Rincon feels a bit like a normal running shoe.

Like I said before, it’s a preference thing. My vote goes to the Rincon unless I’m going past 7 miles. You could easily wear a Rincon for the marathon, but I think I’ll go with the Clifton 6 for longer runs.

Now, let’s get to the fun stuff, the differences.

Both of these things are stacked with extra sole, but looks can be deceiving. Padding-wise, both shoes can get you through just about any distance.

If you like to have that extra squish and that pillow-like feel, then the Clifton 6 is the way to go. It’s not sloppy soft, but the ability to go faster may be compensated for that extra comfort that you will get along the way.

If your goal is speed, then the slightly firmer and more engaged feel of the Rincon will be the way to go.

The benefit of having protection without losing too much momentum when jogging up-tempo is what makes this one special. Yes, I said jogging. If you want to go a bit faster, choose the Rincon. If you prefer slower and steady runs with more comfort, go with the Clifton.

Again, the Clifton 6 has a very pillowy, almost  Tempur-pedic sink in and bounce back type of feel to it. It’s very plush and very accommodating.

The Rincon has a very springy cushiony feel. It has a lot of give to it and a lot of cushion, but you’re going to pop off of the Rincon quite a bit more than you will on the Clifton 6.

On the bottom of the shoes, despite pretty much having the same stuff going on underneath, there is a significant less amount of rubber and a lot of EVA foam left exposed.

This doesn’t really affect the amount of grip both shoes offer, but durability is going to be the downside of that.

So obviously, Hoka decided to get rid of all the rubber they could to be able to shave off some pounds.

However, neither of them is going to top our charts and you’d have to go to something like the Elevon to get exceptional life. But both of these are going to be in that kind of middle ground with the Rincon being much lower.

The next difference between Hoka Clifton and Rincon is the upper.

The upper of the Clifton 6 is sturdier, thicker, softer, and more comfortable. The mesh is higher quality and holds your foot in better. The upper is still fairly breathable but has more padding around the ankles and a bit more on the tongue.

Related: New Balance 1080 vs Hoka One One Clifton

The Clifton 6 has got a thick tongue and it’s just soft everywhere. Even if you have a very narrow foot, the Clifton 6 will still hug your foot throughout its wider toe box and will still lock you down especially with the stitching that Hoka One One put up the sides of the shoe.

The Rincon has that racing flat kind of upper. It uses a single-layer mesh that is thin and more breathable. It’s light on foot and keeps things fairly stripped down. It’s snug in the midfoot and opens up well around the toes.

Despite that, the upper on the Rincon locks you down onto the bottom of the shoe and you won’t feel you’re sliding anywhere.

The tongue on the Rincon is a little bit thinner than the Clifton. But again, it’s a racing shoe and Hoka tried to cut back as much padding and weight as possible.

In terms of comfort, the upper on both shoes is still comfortable and secure, but my vote comes down to the pull tab. The one in the Rincon is bigger and gets on and off a breeze.

So, do you want a lighter, more nimble upper or something that is more supportive and softer that gives a bit more of an accommodating fit? It’s up to you.

For triathletes out there, look at the size of that pull tab on the back. The Rincon has got a reinforced massive tab that you can get three fingers in.

You can yank on that for days and it’s going to make getting your foot into your shoe so much easier.

It looks a little bit funny, but it’s a Hoka and Hoka does things a little bit differently. Again, this pull tab is a nice feature for all the multi-sport athletes out there who want a shoe that they can smash on out of transition to and then run really fast in.

The Clifton 6 has a significantly wider toe/forefoot area especially if you choose the wide version. The Rincon is a very narrow shoe through there and I think it’s going to be a big factor for folks that are choosing between the two.

The weight is unbelievably different between the Clifton and the Rincon. When I first picked up the Rincon, it felt like the time when I picked up the Hoka Stinson Lite. The Stinson was a big chunky shoe and when I picked it up I said to myself there’s no way this shoe could be that light.

Well, I had that exact same sensation with the Rincon. The Rincon is unbelievably light. It’s surprising for a shoe with this much cushioning to feel this light. The picture below shows the weight in ounces and grams.

The men’s Clifton 6 is 9 oz (255 grams) in US size 9, which for the amount of cushioning is still on the light side. This is a light and fast shoe.

For marathon runners, if you’re not a fan of the super firm kind of race-day shoes like the Carbon Rocket and you still want something super cushiony and super light, the Rincon is ticking all your boxes.

So, these are both lightweight shoes, but the Rincon is astonishingly light and it’s actually setting the standard for lightweight high-cushioned running shoes.

In terms of how both shoes actually feel under your foot, the Rincon and the Clifton are very similar but very different at the same time.

In terms of cushioning, obviously because they’ve got the same stack height and the 5-millimeter drop, the ride feels almost identical.

However, when you get up to that kind of top-end speed, the Rincon just goes into its own dimension. It’s so much lighter and so much more responsive. It’s a racing shoe and you’re going to love that.

When I first heard about the Rincon, I honestly thought why Hoka was trying to bring out another racing shoe to this heavily densified category because there’s the Arahi, the Carbon X, the Carbon Rocket Launch, and the Mach.

After running in the Rincon, you’ll definitely know why. Hoka has done a good job designing a shoe that you’re going to be comfortable and can run very fast in because it’s so light.

Where the Rincon is going to win a lot of people over is the price. Hoka has also been a premium shoe brand selling shoes at very high prices like the Hoka Bondi, the Clifton, the Speed Goat, and the Carbon X.

You can check today’s prices here:

If I had to pick only one shoe, I’d give it to the Rincon because that pull tab just gets me hooked.

A few words about the Hoka Carbon X

This bad boy is just another unbelievable shoe that Hoka spent a lot of time perfecting its carbon plate. The Carbon X is sold unbelievably well around the world. It’s not a Nike 4% with which you can run any distance and run fast. The Carbon X is a sort of nice firmer shoe for the 5K and the 10K.

The Carbon X is the shoe that gets you faster over the longer stuff. I believe that if I was to run a marathon, I would run faster in the Carbon X compared to the Rincon. But everyone’s different. Some people don’t like the stiffness of the Carbon X and don’t like that huge Rocker.

There are so many positives to the Rincon and I really think it’s going to sell well globally.

Conclusion: Hoka One One Clifton 6 vs Rincon

In conclusion, is the Hoka Rincon better than the Hoka Clifton 6?

If you want a lightweight, very responsive, and fast racing shoe that’s going to get you through a race comfortably with the same feel as a Clifton, you absolutely cannot go past a Rincon.

If you want a shoe for long miles or a lot of threshold work that you can run in every single day and that lasts 500 miles, then the Clifton 6 should be your go-to shoe.

I think of the Clifton 6 as more of your long training days, long runs, and get out there feel good the whole time. The Rincon is also good for long runs but more of an aggressive faster type run in it.

So there you have it. That was Hoka Rincon vs Clifton 6 running shoe comparison. In the end, it all gets down to preferences, type of running and training, and the price of course.

Please do tell us about your experience with the Hoka Clifton 6, the Hoka Rincon, or the Hoka Carbon X in the comments below.