Today I’m going to talk about how to keep earbuds from falling out when running. I used to have this problem all the time, especially on long runs.

I felt like it’s every 2 or 3 minutes I had to slow down my pace and put my earbuds back. It’s really annoying when all of a sudden, the music is popping out.

Before I start with the tips, I’m going to discuss why getting proper fit is really important.

Quick Navigation hide
1 Why is Fit Important?
2 How to Get The Best Fit
3 How to Keep Your earbuds from Falling Out When Running (Wireless & Wired)
3.1 Buff
3.2 Toque
3.3 Armband
3.4 Bobby Pins
3.5 Right in Left & Left in Right
3.6 Experiment With Different Ear Tips
3.7 Best Earbuds for Running
3.8 Sony WF-SP800N Earbuds
3.9 Anker Soundcore True Wireless Earbuds
3.10 Why Do Earbuds Fall Out Your Ears?

Why is Fit Important?

Getting a good fit is extremely important when using earbuds. If your earbuds don’t sit correctly or aren’t creating a good seal, then they will keep falling off or you’ll notice a drop in sound quality, particularly in the bass.

How to Get The Best Fit

Typically, most earphones will come with silicone ear tips in three sizes, small, medium, and large.

Sometimes, you will also get flange ear tips. Less commonly, some earphones will come with comply foam tips.

In order to get the best fit, the key is to get a seal between the ear tip and your ear canal. This provides the isolation needed and creates friction that keeps the earphones in your ears.

Experiment with different size earbud tips until you find a size that blocks out external noise and fits your ear firmly and comfortably.

It’s also not uncommon to have a different sized ear tip for each ear (L, R).

You should be able to hear a clear difference if the ear tip is properly sealed. If the earphone is fully isolated, you’ll hear much richer sound particularly in the bass with minimal external noise.

You should also feel a slight suction of air in the ear canal where the ear tip is successfully sealed.

Related: Running Against or With Traffic? 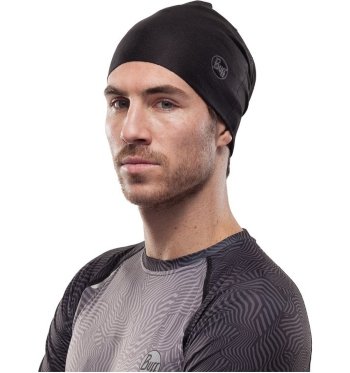 The First tip is to get a buff. Make it into a sweatband so you have something over your ears while your buds are in. It’s going to hold it in a little bit better. 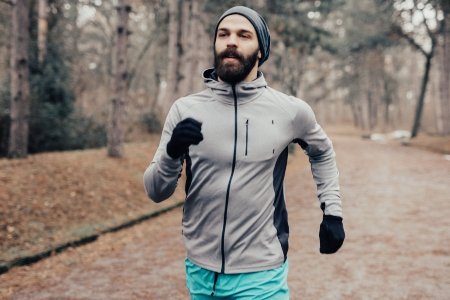 If it’s cold out, wear a toque over your ears and that’ll hold your earbuds in pretty well.

Get wireless earbuds that have a little hook thing that goes in your ear or you can get ones that go over top of your ear. 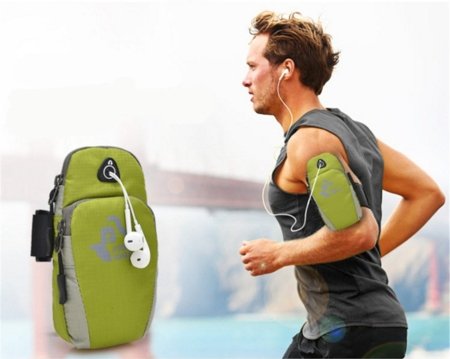 If you have wired earbuds, get an armband. The armband is going to make the tension that’s on the wires a little bit less instead of it hanging all the way down in your pocket.

This way, your earbuds are not going to be bouncing quite as much.

Also, wear your wired earbuds and get two bobby pins through your shirt and just leave a little bit of slack. So, while you’re running, basically all the balance is going to be below your earbuds and nothing’s going to affect it.

Most commonly, cables are worn down from the ear, but many models are now designed with an over-ear fit. Some can even be worn up and down.

Also, try having the cable hanging over your front or back, which can free up space and avoid tangles.

The best way to find the most comfortable fit for you is to experiment with using your earphone under and over the ear.

Right in Left & Left in Right

Here’s a tip that I heard from a fellow runner who’s run a marathon and not one time did his earbuds fall off while running.

His earbuds are labeled R for the right ear and L for the left ear. Well, he does the opposite.

He takes the right earbud and puts it in his right ear and does the same with the other earbud. He puts the earbuds upside down and wraps the cord around his ears. Then, he gives the cord a gentle tug.

For more support, he takes his hat and makes sure the hat squeezes the earbud wires against his ears. That’s a very simple technique for keeping your earphones in place.

There are many options available from different ear tip designs to full custom molds. Here are a few that I would recommend for different budgets.

Comply is made from heat-activated memory foam. When heated in the ear, comply tips conform to the shape of your ear canal for a dynamic custom fit.

How to fit comply

Firstly, remove the current tips on your earbuds and then add the comply.

To do this, put a third of the earphone nozzle just inside the lip of the plastic comply cylinder and then firmly push the rest of the earbud into the cylinder until the comply sits firmly on the earbud nozzle.

Sometimes, this can be a very tight fit. To fit comply, simply squeeze the ear tips and then insert them comfortably into your ear.

Once the memory foam expands and heats up, the tip will conform to the shape of your ear to create a comfortable fit and completely seal your earbuds.

Earcandi is for those that want a custom molding system for their current earbuds that won’t break the bank.

This is a video about how to fit Earcandi.

Remove both portions of Earcandi material and knead together until you have an even color. Split the material into two equal portions, and roll into a cylinder that’s approximately 5 centimeters long.

Loop around the stem of the earbud bringing the Earcandi on together on the other side and insert the earbud into your ear.

Mold the Earcandi over and around your earbuds until you achieve a good seal and the desired finish.

Wait 10 to 15 minutes for the Earcandi material to set and carefully remove from your ears. That’s it.

Snugs are fully custom-molded ear tips that can be made for any earbud.

A Sung will pay you a visit with a state-of-the-art 3D scanner to quickly and painlessly scan your ears.

Once you’ve chosen from a wide range of colors and optional unique twists like glitter, your Snug’s impressions will be manufactured in a lab which usually takes a few weeks.

Snugs come in both half and full shell options which can be made to fit any earphone.

These are some really great earbuds that lots of runners swear by. They’re stable and stay on while you’re running or working out.

Why Do Earbuds Fall Out Your Ears?

The fact that AirPods fall out of your ear so easily has gotten to be meme status lately, which is something that third-party sellers know very well. So, when you ask “How to keep Airpods from falling out?” They say “all you have to do is pay 10 bucks for those little silicone headphone socks”.

But why does this happen in the first place?

It seems like all the articles I found dismissed it as maybe your ears are too big or earwax or I don’t know.

But that answer isn’t good enough for anyone. There’s a chance to imagine the body complexly here.

So, what is it about your ear anatomy that makes earbuds fall out so easily?

Related: Are Airpods Good For Running?

Sure, but it’s actually not that big of a deal. Earwax is mostly cholesterol and fatty acids. Earwax is going to reduce the friction between surfaces by dropping something called the coefficient of friction, which reduces the force required for those headphones to pop out.

Most earbuds are made of a rigid silicone plastic while the older headphones have rubber tips. The rubber is going to have a way higher coefficient of friction.

Earwax will drop that number for both types of headphones, but I couldn’t find the exact value. So, there’s a drop in friction because of earwax, but because of how earbuds interact with yourear anatomy, that really doesn’t matter anyway.

To understand why though, we need to know what part of the ear we’re talking about. We really don’t care about the inner or middle ear.

According to a 2008 audiology textbook, it’s an inch deep and about a quarter inch in diameter on average that matters for traditional earbuds, but AirPods, for example, actually sit in the auricle, which is all the visible flexy stuff on the surface.

So, modern earbuds don’t insert into the ear, they sit on it. Specifically, they rest in a little nook called the concha up against the often pierceable tragus and the anti-tragus.

I read a few papers from plastic surgeons who reconstruct the outer ear and they found differences in auricle length between adults of almost a centimeter. And they’re not just different sizes, our ears might be as uniquely shaped as our fingerprints.

These differences in ear shapes and sizes mean that some headphones are inherently going to fit some people better than others, and we know that because of certain types of hearing aids, which sit in the same little ear nook as earbuds.

Plus, your left and right ear aren’t totally identical. It’s completely normal for our bodies not to have perfect symmetry whether that’s accumulation of soft tissue, leg length, or ears.

So, your left ear might be a little bit bigger than your right ear, which makes it seem like one of the headphones is falling out more often than the other.

So, are your ears actually too big? No. It’s just that everyone’s ears are different.

You wouldn’t be surprised if your earbuds fall out during exercise, but it’s frustrating when it happens when you’re sitting still.

If you put your fingers in front of your tragus and open and close your jaw, you can feel something flex.

This is called the Temporomandibular joint, or TMJ, the pivot point between the temple and jaw, which we call the mandible.

While it might seem like the jaw hinges way lower on the skull, its joint is actually right next to the ear.

That motion alone isn’t enough to rip the headphones out of your ear, but it is a nudge, which ultimately makes them seem like they’re falling out more often.

I hope this guide has helped you create a better fit for your earphones and answered your question ‘how to keep earbuds from falling out when running?’

If you need any more information, please leave a comment below.

Thanks for making it this far in the article and happy running everybody.