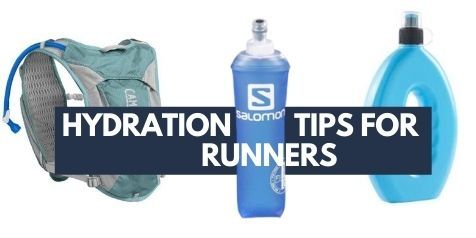 When the weather gets nicer and more humid, one of the most popular questions a lot of runners ask is what am I supposed to do about water when I run?

Today, I’m going to be looking at some of the best hydration tips for runners:

So first of all,

Quick Navigation hide
Why do we need water when we run?
When should you drink water?
Two interesting research studies
Sweat Test
How should you carry water?
Hydration Running Gear
Handheld Bottles
Waist Belt
Soft Flask
How to stay hydrated while running long distances?
Bladder Pack

Why do we need water when we run?

Well, a lot of the time when we run, we sweat and when we sweat, we lose liquid and salts from our body.

That in turn makes our blood thicker, which means that our heart has to beat faster in order to pump it around the body.

So, if you are becoming dehydrated through a lack of water in your system, then it means that your running performance can be affected because your heart is having to work that extra bit harder.

Not only that but if you do go down the route of severe dehydration, you can come across some serious health implications as a result of that, as well.

So, when you’re running and you’re losing sweat, you should be looking at hydrating as much as you’re losing in order to maintain your running performance.

Now you might find that local water fountains that you can find in parks and the like aren’t actually switched on.

So it’s important to think about your water consumption leading up to, during, and after your run and how and where you’re going to have access to that water.

It’s important to note that you aren’t going to need to take water on every run you do.

So how do you know when you are supposed to have water with you?

When should you drink water?

Depending on the weather and the temperature, for runs of up to 45 minutes or so, you shouldn’t really need to be taking water out with you.

now sweat loss of around 1 to 2% of your body weight is entirely normal and shouldn’t really negatively impact your running performance.

But one thing to note that is important is that you are staying hydrated in the days leading up to your run and just generally throughout the week.

It’s a good habit to get into to make sure that you are staying totally hydrated.

So how much water should you drink before running? Well, don’t just down a pint of water before running. Not many people like to run on a full stomach of water anyway, but it could cause a stitch and just generally make you feel uncomfortable.

It’s not really going to hydrate you as quickly as that, either.

So, if you’re staying hydrated and getting into good habits of drinking water throughout the week, then you shouldn’t have to worry too much about taking water out with you for runs that are less than 45 minutes.

Related: With or Against Traffic – Which is Safer For Road Runners?

Recent research has looked into something called hydration perception and how that can be just as beneficial as other physiological factors.

In other words, taking on water and drinking when you feel thirsty on a run can be just as successful to boosting your running performance as measuring exactly how much liquid you’re losing and taking that back on board, as well.

There was no difference found in their sporting performance. In fact, the only difference that was noted was the perceived level of thirst after the run.

So the thing with this study is it highlights that actually you might not need to be taking on as much water as you think whilst you’re running.

You can do what’s called a sweat test. In order to do this, before you go out on your run, jump on the scales and weigh yourself without any clothes on.

Then go out for a 1-hour run at your race pace keeping a note of how much water you take on during that run.

When you get back from your run, towel off any sweat, get back onto the scales again without your clothes on, and then take away your post-run weight from your pre-run weights and make sure that you add in ounces the amount of water that you took on during the run.

The difference then will be the amount of sweat that you lost during the run and you can work out from that how much water you then need to take on your next run.

Important to note though that this does vary depending on weather conditions, altitude, the pace that you’re running out.

So as you get faster, this number will change and this is something that you will need to do more than once just to keep it up-to-date to work it out if you really want to know exactly how much water to take on.

You can also then divide that number by 4 to get how much water you should take on every 15 minutes during that 1-hour run.

This is important to note because rather than trying to rehydrate all at once, it means that you can space out the amount of water that you’re taking on during those runs.

How should you carry water?

Now we know when you need to carry water and you can also work out how much you need to have with you for your run, how do you go about actually carrying it?

Well, in this blog post about running in the heat, we’ve got loads of tips for you to get inventive on how to get water while you’re out on the run like:

But we know that that’s not always going to be possible and so I’m going to have a look at some of the different ways that you can carry water.

First, I’m going to look at some handheld bottle options. These are ones that are really easy to grab and go.

This one is the Ultimate Performance handheld grip bottle. It comes in the shape of a handle, which means that ergonomically, it’s quite comfortable to carry while you’re running because you can just grab your hand around it and go.

This one is 518 milliliters in capacity and just super simple if you want to grab it and have a little drink on the go.

One thing to note though, if you are going to be carrying a bottle whilst you’re running is that it does affect how much weight you’re carrying on each side.

So, it’s important to think about changing the hand that you’re carrying it in.

I ran a whole marathon holding a water bottle and ended up with a bit of a sore hand afterward because I kept the bottle in exactly the same hand for the whole 26.2 miles – lesson learned.

Next up is this Ronhill hand grip bottle. This one comes with its own case so you can grab around it and hold the case bit while you’re running.

It’s got reflective strips on it, which is great if you’re running in low light to be seen.

It’s also got a handy little zip pocket that you can keep keys and things in. It’s not big enough for a phone though, but you can keep little tiny bits stashed in that zip pocket, too.

This is a 500-milliliter bottle and again, worth considering swapping hands over whilst you’re running if you’re going to be carrying this one with you.

You can also get waist belts that you can put water bottles in. Some of them come with two bottles so that the weight is distributed evenly across your hips.

This particular one is the Ultimate Performance Ribble II waist belt.

It comes with a 650-milliliter bottle that sits on one side of your hip.

You’ve got a zip pocket that you can keep your phone in and it’s also made out of moisture-wicking fabric.

So, if you do tend to get a little bit sweaty because you’re probably going to be carrying this when it’s a bit of a warmer run, then that will help wick the sweat away from your waist.

Another option that you’ve got for carrying water and a less bulky one is a soft flask.

These are designed to be more squidgy and can be popped in a pocket or a belt or even in a hydration vest.

So, soft flasks tend to be favored by a lot of ultramarathon runners. In fact, Jim Walmsley will only run with a soft flask in his hand during certain stages of his ultra races.

Now, this particular Salomon soft flask is 500 milliliters and it also comes with a filter system.

The filter in the nozzle will filter out certain types of bacteria from natural water sources.

This means that if you’re out on the trails or up in the mountains, then you can actually refill your bottle on the go without having to worry about any nasty bacteria getting in it.

It also shrinks as you drink. So with this soft flask, it means that as you drink it, it gets smaller and so you don’t have as much to carry.

How to stay hydrated while running long distances?

Finally, if you’re planning out on going for a bit of a longer run or perhaps a full day out on the trails, then a bladder pack might be the one for you.

Bladder packs have the water inside the bladder which then fits on your back inside a vest.

The idea is that the weight of the water is then evenly distributed across your body with the straps down the front, which can clip and be adjusted, as well.

This particular Camelbak pack has adjustable straps around the side. There is women’s fit and there is men’s fit that you can get, too.

Bladder packs come with a tube that you can then easily reach the water.

One thing to note is if you’ve never run with the bladder pack on your back before, you can sometimes hear the water sloshing around.

One tip for you to try and get rid of that sloshing noises is to just turn the bladder upside down and suck out  some of the remaining extra air in it.

So this pretty much wraps up this hydration tips for runners post.

So, what do you do about running and water?

Where do you stash your water?

Let us know in the comments below because it may be something that I haven’t even thought about in this post.

But hopefully, I’ve given you plenty of tips no when to know when to carry water, how to carry it, and how much you need.