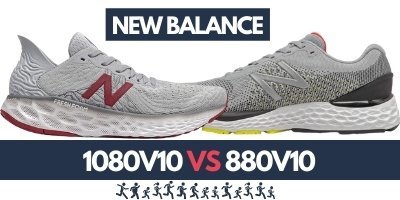 This article will always be updated and compare any future iterations of the New Balance 1080 vs 880.

Both shoes have a Fresh Foam midsole, but the 1080 has a higher stack height than the 880.

The 1080 has a bootie construction and the 880 has a detached tongue. The 1080 is more breathable than the 880 because the latter has a firmer knit.

The New Balance 880 has a standard heel counter whereas the 1080 has a flared out heel.

First off, the New Balance 1080v10 is one of these top max cushion running shoes.

There is no doubt that the 1080 and 880 have been a big success at most stores. It’s kind of sad for the Saucony Triumph 17, which is a fantastic shoe, that the 1080 and the 880 came out the same year stronger than ever.

In fact, it’s been such a big success that most stores have trouble having enough shoes available at all times.

The New Balance 880 is completely re-imagined while retaining its essence as a more traditional-oriented daily trainer.

So, with both of these shoes, the big new thing is the midsole because both use Fresh Foam X. The previous 880v9 had a TrueFuse midsole and now New Balance has added Fresh Foam X to the 880v10 as well.

Talking about the stack height, there’s a little bit of difference between the construction of the Fresh Foam X. The 1080v10 has a stack height of 29mm in the heel and 21mm in the forefoot for a heel-to-toe drop of 8mm for both women and men.

There’s also a little bit slight of a difference on the midsole. There’s a little bit more black foam on the 880, which I guess acts like higher return foam under the pressure points of your forefoot.

If you want even more cushioning, make sure you read this comparison of the Hoka Clifton vs the Bondi series.

The upper is the biggest difference between these shoes. Both shoes have a Hypoknit upper, which is just a fancy way of saying knit, but they feel different.

The 1080 has a little bit of a rubbery upper with a lot of hold around the midfoot and heel because of the trace fiber stitching.

The 880 has a more normal conservative upper with two densities of knit and a third in-through the midfoot to really hold you in. This gives a lot more hold on the entire foot and without the rubbery fabric of the 1080.

The plastic cup on the heel of the 880 really locks down the foot as does the more traditional collar.

I can also say the 1080 is a bit more breathable because the 880’s firmer knit just makes the shoe a tad less breathable.

The 880 has a detached tongue while the 1080 has that bootie construction.

A lot of people seem to criticize the tongue of the newest New Balance shoes especially because it’s thick and goes really high on the foot.

Everybody has their opinion and my subjective opinion, this is not too thick and I actually like it being higher than having a thin tongue sticking into my foot all the time.

Also, if you want to do a runner’s knot, then it’s actually nice to have a high tongue so you can actually get more laces in contact with your tongue instead of having the laces hit your foot.

So, both these tongues are very good and they’re not even close to being the thickest on the market.

Performance-wise, I must admit that I actually don’t feel that much of a difference between the two shoes.

It’s almost like I have to kind of close my eyes and get all my senses going to actually notice a little bit of a difference.

There are no subtle differences. If you have these two shoes on, there’s a huge difference.

The 1080 has like a really hard hold around the heel and right on top and maybe the upper part of the laces.

However, in the forefoot, there’s absolutely no hold. So when I run in the 1080v10, my feet kind of tighten up, and they kind struggle to lose grip and start rolling around inside.

My feet in the 880 just relax automatically and the hold is just uniform.

Essentially, the 1080 and the 880 share a very similar outsole. Both shoes have blown rubber in the forefoot to try and make the rebound a little bit better.

However, I guess the 880 is more flexible because the grooves are a little bit deeper.

Looking at the two shoes, you would probably think that since the 880 has less cushion, it would be lighter. That’s not the case.

Surprisingly, though the midsole is a little bit bigger on the 1080v10, the shoe is about an ounce lither than the 880v10.

So for how much cushioning the 1080 has, you can easily just keep backing up runs after runs and your calves won’t get fatigued with having too much weight underneath your foot.

Again, the 1080 feels a lot more bouncy and has a lot more of a soft outside. But apart from that, I actually think it’s very similar.

I did some 90-degree turns on the 200-meter and 400-meter intervals and I didn’t feel much of a difference.

A better hold on the midfoot and around the ankle area is much more important than a good hold up in the forefoot and I think the 880 performs better here.

The 1080v10 has a lot of laser-perforated holes on the outside midsole, which makes it a little bit softer on the outer side.

So people that land really far on the outside of the foot and further back might get a little bit better of a result stability-wise.

However, the 1080 might feel stable for some people as well.

Who are they for

It seems that a lot of people use the 1080 to run longer in and the 880 to run shorter in and I wouldn’t agree more. The 1080 offers a bit more of a cushioned ride and the 880 is less cushioned.

If you’re looking at doing a 5k, 10k, half marathon, or marathon and you just want a shoe that you can train and race in, the 1080 will work completely fine.

The 1080 is great for long-mileage training and recovery runs.

The 880 is a good choice for beginner runners and pretty much anybody who wants a traditional ride with super updated materials.

Also, if you want a shoe that you can easily run in and take to the gym, the 880 can definitely do that.

I probably wouldn’t recommend the 1080 for the gym just because the Fresh Foam X does compress quite a lot.

If you own or have run in another shoe before and want to know what these two shoes compare to, the 880 goes quite well against something like the Saucony Ride or the Brooks Ghost, and the 1080 competes with shoes like Saucony Triumph 17, the Skechers Ride 8, or the Hoka Bondi series.

I would probably pick the 1080v10 over the Bondi especially if you’re looking for a better rocker sole.

The thing is I represent maybe half of the people because the other half really loves the 1080 and that’s why I encourage you to go to a store and try out both shoes.

See if you can run in them on a treadmill or something like that to check them out and see which one you like better.

What I like isn’t necessarily what you like, but both are fantastic shoes. When it comes to the difference, it all boils down to what you like and feel more comfortable in.

So that pretty much wraps up this New Balance 1080 vs 880 comparison. If you agree or disagree, I would be glad to hear your thoughts in the comments section below.