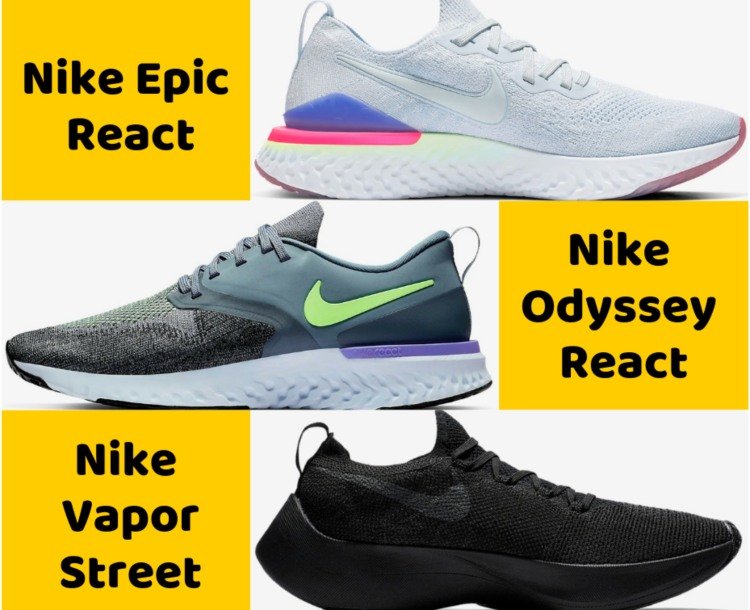 Today I’ll be doing Nike Odyssey React vs Epic React. Then I’ll be comparing both to the Vapor Street.

So a lot of you guys are wondering if the new Nike Odyssey React is worth buying in comparison to the Nike Epic React or even the Vapor street.

Here are my thoughts below.

I’m not sure how much these shoes cost today, but before you continue reading, make sure you check their current prices here: Nike Epic, Nike Odyssey, Nike Vapor Street.

Some of you guys have tried the Adidas NMDs and you realized that they are not as comfortable as the Adidas UltraBoost. The Boost material just is not comfortable and it’s even worse on the NMDs.

Will the Odyssey actually be as comfortable as the Epic React?

I’m going to just tell you that now.

I think the Odyssey is as comfortable as the Epic React. The React material on both shoes is amazing and it’s definitely felt quite a bit on the Odyssey React. I don’t honestly notice too much of a difference between the two.

There are a couple primary differences between these three shoes.

So let’s get go and get into those.

Nike React Element 87 vs 55 Side By Side Comparison

The upper on the Odyssey is only mesh and it does not have flyknit. The Epic React Flyknit does have flyknit on the upper as it suggests. The Vapor Street has a sort of rubberized texture flyknit upper which I think is really awesome. The material on the Vapor Street’s upper is something else.

The Nike Epic React is featured as one of these best shoes for athleisure.

I would say that the Odyssey React and the Epic React actually fit pretty similar. They are both 9.5 my true to size, but if I had the opportunity to buy them again I would probably go with the size 10 just because I personally like a little extra wiggle room.

As for the Vapor Street I would say they fit true to size but they do run a little bit narrow.

Out of the three uppers and the tongue I would actually give the Vapor Street the edge. I think it has a better material and I like that the tongue is more breathable.

That being said, all three of these are actually pretty good.

As for the midsole of the Odyssey and the Epic React, you definitely have a really really nice ride. They feature that full-length React material in the raw form and both of them really deliver.

The Vapor Street actually has the most React material out of all three and obviously, the Vapor feels like pillows when you step because there’s just so much React in the midsole.

Comparison between the Epic React and the Odyssey React, the React material on the Odyssey’s mid-section of the midsole actually looks a little bit thicker than it does on the Epic React, which I found pretty interesting.

The main difference on the React material from what I can see is the Epic React protrudes outward more on the back section whereas the Odyssey React doesn’t stick out as far. But honestly, I don’t notice the difference when I step. I feel like it feels pretty much exactly the same.

The Epic React has kind of the oversized heel section of the React. Also, I might be crazy but it looks like the Epic React actually has a wider base across the ball of the foot than the Odyssey React.

Although the Vapor Street has the maximum amount of React material, it’s also the narrowest option on your feet. The mid-section is extremely narrow and that could be something that definitely is off-putting to the consumer.

Because it has so much React and because it’s so narrow, it honestly feels a little bit unstable when you walk. You may want to consider this fact.

Moving out to the outsole of these shoes, my main complain about the Epic React is that it shows signs of wear and tear pretty quickly because they only put tread on the tips of the shoe and for some reason, they left the middle section completely bare and I don’t understand why Nike did that.

So I think Nike just needs to bring more traction on the bottom of these shoes. Nike claims that the React can last for a long time without bottoming out. The Odyssey actually have some longevity, but I guess time will tell to see if that’s actually the case.

The Epic React is a little bit slippery as well when it’s wet outside because it doesn’t have too much traction.

I do love the improvements on the Odyssey React. However, I don’t really love the ‘T’ shape on the bottom because the section marked on the picture above will really be a high traffic section all of a sudden. At least for the Epic React, it came down a little bit lower.

So Nike solved part of the problem by adding two sections of reinforcement, but then also introduced more problem by introducing the ‘T’ section of the shoe. I don’t know why they did that, maybe they were cutting costs, but I can’t really say.

I feel like the Vapor Street actually offers the best solution to the sole because it has rubberized traction through the entire bottom part of the shoe and then they added a little bit of reinforcement on the back.

That way, you don’t see the React too much on the bottom of the Vapor Street and it gives you the maximum amount of protection and hopefully creates more longevity for the look of the shoe at least.

So that’s kind of an overview of all three of the shoes.

Let’s recap some of the pros and cons of each model.

The Odyssey React has an amazing value price-wise and offers better traction than the Epic React. The React material on the Odyssey is felt just as much as on the Epic. It’s definitely the most bang for the buck on the new Nike shoe and it is very very light.

Some of the cons of the Odyssey React include the attached neoprene tongue. I’m not really a huge fan of it although I get that it’s functional and it does keep your foot snug and in place. Just aesthetically, it looks a little bit interesting.

For some people out there that lover flyknit, the Odyssey does not have flyknit, so this may be a con to you. For me personally, no flyknit, no problem and I don’t mind the mesh.

Also, I don’t honestly love the style of the Odyssey React. I think it is an average looking shoe. It’s not bad, but it’s not like amazing to me, either.

Even on the Vapor Street version, you can notice the creases. I personally don’t mind the creases, but a lot of people don’t like that sort of look on their sneakers.

It’s a great all-around shoe for its price, offers a great fit if you like a snug ride, and has amazing cushioning. If you do prefer flyknit, then that could be a pro for you as well. The Epic React are really light and I think they’re actually lighter than the Odyssey React probably because they have less rubber on the bottom.

As for the cons of the Epic React, obviously you already know that the sole visibly looks terrible and that’s something that people don’t like to see. They also feel pretty snug especially for people who have wide feet. Also, the traction is really lacking especially in the rain.

I love the flyknit. It is different and it has a rubberized feeling. It’s just unique and I really dig it. The style of the Vapor Street is a pro for me personally although they look like elf shoes or a nerf football to some people. I think they look awesome.

I also love the fact that the Vapor is a kind of a nod to the Vaporfly Elite style of the shoe.

Another pro is React itself is insane on this shoe and it’s definitely the most felt on any of the React models. The traction is really good on this shoe in comparison to the Epic React and the Odyssey React. I love that this shoe is actually geared towards the casual target market.

Its price is pretty steep compared to the other two. But the biggest con for me is just how incredibly narrow this shoe is. It’s so narrow especially in the back of this shoe, which I think could lead to a really unstable feeling. I don’t really prefer a shoe that makes me topple over, but at the end of the day, I like it.

Another potential con is just the overall length of this shoe. It’s just super long because of that crazy horn at the back.

The last thing I want to go over is just the scoring of the three shoes together. I give them a score of 1 to 5 and 5 is the best.

So we have a tie between the Odyssey React and the Vapor Street React.

If you can only buy one of these pairs of shoes, which one should you buy?

I can’t really give you a firm answer on that because it depends on what you want out of these shoes.

What is your budget? What style do you like? What attributes to the shoes do you value more?

All three of them are really great options and have really good comfort on feet. They’re all super light and they’re all breathable.

The Odyssey React and the Epic React are performance-based shoes that you can wear casually whereas the Vapor Street is actually geared towards casual wear.

If you want a shoe for gym, running, grocery store runs and everything else, the Vapor Street might not be a choice.

Personally for me though if budget is a concern, the Odyssey React definitely offers the most bang for the buck. The React material feels great in this shoe. For those who have not tried any of these shoes, the Odyssey React is a great entry-level model and introduction to React.

The best all-around shoe style, comfort, versatility though definitely goes to the Epic React in my opinion. If you can afford it, the Nike Epic React stylistically looks the best for the price point.

With a breathable flyknit upper and an amazing React cushioning system, the Epic React is definitely one that you can’t go wrong with. This is sort of like the Mario of Mario Kart. It has average stats across the board but gets the job done and it’s a great shoe.

Thank you so much for making it this far through the Nike Odyssey React vs Epic React.