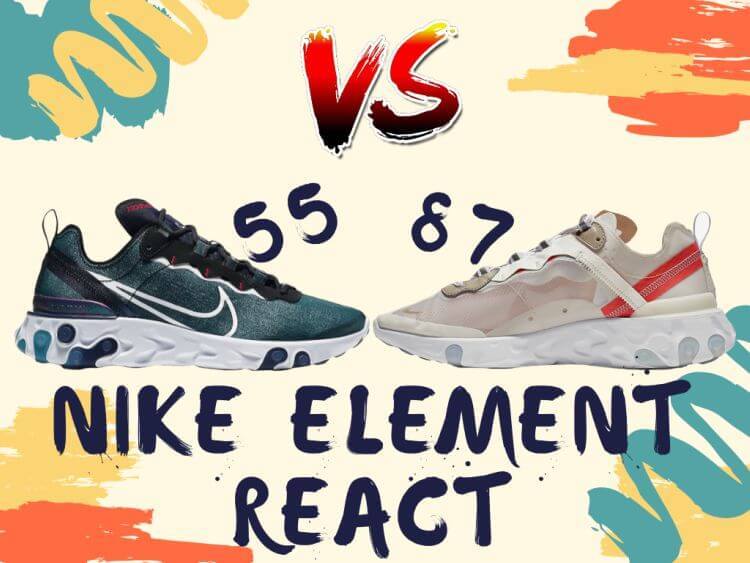 Today I’m comparing two of the most popular sneakers, the Nike React Element 55 vs 87.

Both of the Nike React Element 55 and the Element 87 look great.

If you have to decide between the Element 55 and the 87, I think you really can’t go wrong with either one.

If you’re buying decision is based on budget, obviously, the 55 is a way to go and it’s a much easier shoe to find.

If you’re buying the shoe purely for hype, then get the 87 no question.

If you’re buying the shoe purely for looks, then I would say either one is fine. Just grab a colorway that you like the best.

Nike released a sneaker called the Nike React Element 87. This is one of the first pairs to drop.

There were two colorways that actually came out at the same time, this one and also a black-and-gray colorway.

The Nike React Element 87 is kind of groundbreaking not because it featured any new kind of crazy technology. Yes, it did have a full React midsole, but that had been seen on other sneakers like the Epoch React.

However, the overall look and esthetic of the silhouette really caught a lot of people’s attention and it just really made this shoe unbelievably popular and almost impossible to get.

One of my favorite details about the shoe is that the upper of the sneaker is actually covered in this clear mesh.

You can actually see right through to your socks or your feet, but I’m kind of hoping if you’re wearing the shoe you’re wearing socks because I don’t want to see your feet.

The cool thing about that is that you could actually change the entire look of the upper by just changing the color of your socks.

The midsole cushion itself also did play a big part because it’s unbelievably comfortable.

Having such a thick comfortable midsole that a lot of people liked really made this shoe fly off shelves.

Just recently, Nike released a budget version of the 87 that they made a lot more pairs of called the Nike React Element 55.

You can definitely tell that the 55 and the 87 do look strikingly similar. Obviously, the colorways are different, but the overall shape of both shoes is almost exactly the same.

However, there are a few differences besides availability that set these two shoes apart.

The first big difference between these two shoes is obviously the price. The Nike Element 55 is $30 cheaper than the Element 87 and it’s a lot more widely available.

You can pretty much walk into any store and find a pair in your size.

Some people have been kind of frustrated about the release of the 55 because they feel like it’s going to sort of take away some of the hype from the 87.

It’s actually not a problem at all. In my opinion, it really gives people who want an Element 87 the chance to grab the next best thing.

Continuing on to the physical differences between these two shoes, let’s continue on to the upper.

As I mentioned before, the upper of the Element 87 is primarily covered in this thin translucent mesh.

It’s sort of stiff just so the front of the shoe can hold its shape. It is clear so you can see right through it.

Obviously, some colorways of the Element 87 have a slightly darker mesh so it is a little bit harder to see through it, but with this particular sale colorway, it’s completely clear.

One of my favorite things about this upper is that it’s unbelievably breathable. Because it’s a mesh upper, it lets so much air into your foot. No matter how long you’re wearing the shoe, your foot is really well ventilated.

I also like that because it is clear, you can actually see through to some of the structural elements. That’s just a cool touch in my opinion and I think overall this upper is just really clean unless you’re not wearing socks in which case then it’s not.

Moving over to the Element 55, instead of your translucent mesh upper, you’ve actually got this really thin sort of nylon feeling fabric.

My main comfort problem with it though is that unlike the mesh, it’s not really ventilated whatsoever. Obviously, the Element 55 does get very hot.

You’d think just because it’s a thin fabric it wouldn’t get that hot and maybe like in the winter it wouldn’t, but just walking around during the day my foot got really warm.

Something else that people may dislike or in some cases really like is that the upper of the Element 55 is completely opaque, which means you can’t see through it at all.

So if you have gross feet or your socks suck, then this is a good way to go. In my opinion, it definitely takes away from the unique esthetic of the sneaker, but I can definitely see how this fabric material is cheaper than that thin sort of clear mesh.

Another small detail that I noticed is that the swooshes on both shoes are actually different. On the Element 87 it’s a printed swoosh right on the side of the mesh and then on the Element 55 you’ve actually got a separate piece of material glued onto the upper.

Is one swoosh application better than the other?

I just kind of prefer the one on the 87. Also, it looks like Nike omitted the mini swoosh on the 87 from the 55. Not sure why they did that, but it’s just not there.

As you continue up on both shoes, you can see that the 87 has slightly nicer materials on pretty much every part of the upper.

The small panel around the bottom of the tongue is leather on the 87 and it’s sort of weird nubuck on the 55s.

You’ve got what looks like suede on the midfoot of the 87 and then faux suede or felt on the 55.

Not only that but the laces that they use on the Element 87 are actually flat and have this kind of nice dot detail running down the center.

Then on the 55, you’ve just got these plain black rope laces which aren’t bad, but they’re just not as interesting.

It’s actually two pieces of material bonded together so it’s slightly stiffer and has a nicer shape.

The tongue on the Element 55 is just this kind of like a really flimsy piece of material and it doesn’t really seem to do much.

However, the tongues on both sneakers do have the Nike React printing and that Nike swoosh pinwheel.

The heel portion of each upper is pretty much identical. You have this small TPU heel clip on both sneakers.

I’ve been calling that detail the heel counter, but on Nike’s website, they call it a heel clip. I’m not sure why, but maybe because it’s so small.

You’ve got the same suede detail on each shoe and then a pull tab right above it.

Then, of course, you’ve got that famous stitching detail on both sneakers except on the 87 it’s a lot more pronounced and actually is one of the biggest design details on the shoe.

On the 55, the stitching detail just kind of blends in with the upper and it’s not really pronounced at all.

Inside each shoe, neither one has much padding to speak of. They’re both definitely comfortable nonetheless so it’s not really that big of a deal.

One notable change between the two shoes is that the Element 87 actually has a cork insole and the Element 55 just has a regular black insole.

I’m not in love with the cork insole so it’s not a big deal to me that they removed it. I think it’s just another cost-saving measure.

As for the fit of both shoes, this is where the Element 55 actually really shines. I have both of these shoes in my true size. However, the Element 87 doesn’t really fit that great.

They’re both pretty narrow shoes so that’s something to think about. I have pretty narrow feet so it’s not a big deal for me, but one thing I noticed is that the Element 87 definitely fits a little bit big.

If I’d known that before I got the shoe, I probably would have gone down half a size because I do have some room in the toe. Yet, it’s not unwearable and it’s definitely not uncomfortable.

On the Element 55 on the other hand though, it seems like Nike really fixed that fit problem and this shoe fits pretty much one-to-one.

I don’t know if it was the material change or maybe they shrunk the shoe a tiny bit. I’m not sure what the deal was, but the Nike Element 55 fits great.

So, if you’re grabbing the 87, maybe go down half a size if you have narrow feet. If you have wider feet, maybe stay true to size.

Honestly, you should be okay going true to size, but if you have a chance to try on the shoe first before you buy it, make sure to do that to make sure the sizing is right for you.

The Element 55 on the other hand is a lot less complicated. I would just say go true to size unless you have wide feet, in which case go up half a size.

Even though both of these shoes have React midsoles and it looks like they were molded in the exact same mold, the 55 just feels ever so slightly stiffer, and I don’t know why.

At first, I was thinking maybe it’s just I’ve worn the 87 more so it’s a little bit softer, but I actually just had a brand-new pair of Undercover React Element 87 and even those still felt softer than the 55.

I could just be going crazy and I could just be imagining the 55 is a little bit stiffer, but let me know in the comments section if you have both of these shoes which one you think is softer because at this point I’m just not sure.

As for the actual color, this black and teal colorway does look really nice on the Element 55. I think the translucent yellow on the 87 also looks really good with this upper.

So esthetically, the midsole and outsole are pretty much exactly the same. The only difference is obviously colorway.

That pretty much wraps up the Nike React Element 87 vs 55 for today and thank you so much for making it this far.

I’d love to know your thoughts on the Nike Element 55 and the Element 87 and which shoe you like better.