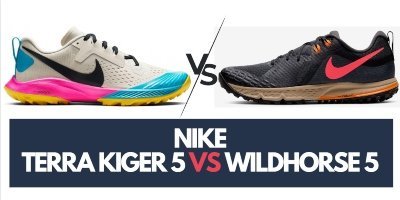 Today, we’re going to be in-depth with the Nike Terra Kiger 5 vs Wildhorse 5.

The Nike Wildhorse 5 is a trail shoe with a Phylon midsole, a Zoom Air unit in the heel, and a rock plate in the forefoot.

The Terra Kiger 5 is a React foam midsole with a rock plate in the forefoot and a Zoom Air unit in the heel.

So in essence, both shoes are very similar in terms of those basic parameters with the main difference being the midsole foam.

Ultimately, what that made for me was two shoes that serve kind of two very different purposes.

The Wildhorse 5 seems to be more of a workhorse type of shoe. It’s a shoe that I could see as being more of a daily trainer.

The Terra Kiger 5 seems to be a little bit faster and lighter. It’s a shoe that I maybe would wear on a race day or maybe wear on a day that it’s a little bit of an easier trail that I’m running on. 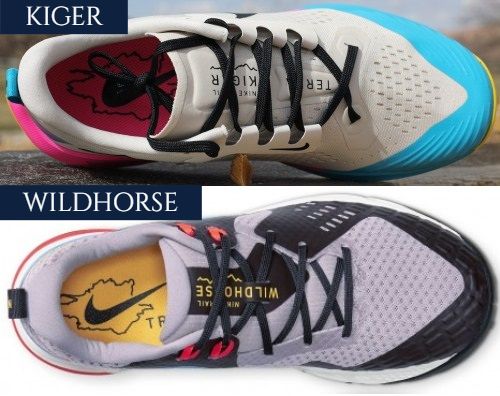 In terms of the uppers, what we see in the Wildhorse 5 is what I would consider it to be more of like a traditional running shoe type upper.

There’s some mesh in the forefoot that is nice and breathable. Then, as we get towards the sides and the back of the shoe, it’s less breathable there to keep some of the elements out.

The upper of the Wildhorse just feels more kind of old-school in a way or just like a regular upper.

The upper on the Terra Kiger 5 seems a little bit more modern. The mesh seems to be a little bit of a thinner material and a lot more breathable.

There’s some padding but not quite as much as on the Wildhorse 5 and both of the shoes do have heel tabs.

The lacing system on the Terra Kiger 5 is also a little bit different. It reminds me of something that I saw on the Nike Gyakusou Turbo where the laces are kind of buried into the shoe at the forefoot.

I found that it was made for a very comfortable fit for the laces and the tongue has a little bit of padding but not very much.

In contrast, on the Wildhorse 5, you have more of a traditional lacing system and the tongue is much more padded.

Another thing is that the Wildhorse 5 is a little bit heavier of a shoe. It doesn’t feel that heavy on the foot because the balance is pretty good, but it is heavier than the Terra Kiger 5.

This is just something else to keep in mind as you’re considering the differences between those two shoes. 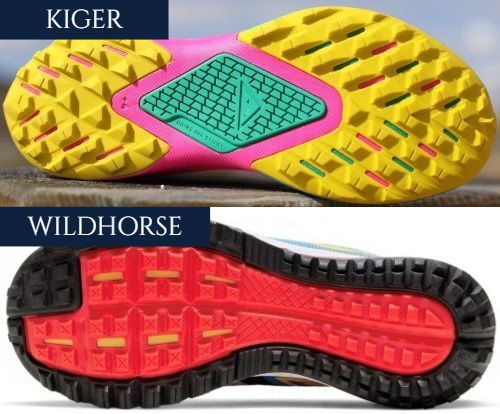 This leads me to feel that the Wildhorse 5 is your daily trainer because there’s just more padding all around any part of the shoe that’s going to be touching your ankle or the top of your foot.

So both of these shoes do really well in the hills. My ultimate impression is that the Wildhorse 5 seems to protect me a lot more from the elements.

I don’t know if it’s the Phylon cushioning material. This is a material that I’ve only experienced in one other shoe and that’s the Zoom Streak 7, but it’s a very different implementation there.

The amount of Phylon is a lot less. There’s also a shank in the Streak 7. I didn’t feel Phylon to be that bouncy on the Wildhorse 5 and the ultimate sensation that I got was that the Phylon was a little bit stiffer of a midsole material.

So when I was running through the trails hitting rocks and hitting those uneven surfaces, I felt like I was much more sure-footed and stable in the Wildhorse.

The Terra Kiger isn’t unstable and it isn’t not sure-footed. But the feeling that I got running in this shoe both at night and during the day was that this was a little bit more nimble of a shoe despite some of this really aggressive-looking outsole pattern.

I felt like the rock plate wasn’t as substantial. There were certainly some times as I was running and maybe it’s because I was running it the night and couldn’t see some of the rocks as well ahead of time so maybe I couldn’t anticipate them better, but I felt like I wasn’t getting as much protection from the elements like the harshness of the rocks and the terrain in the Terra Kiger 5 as I was in the Wildhorse 5.

it wasn’t uncomfortable and it wasn’t painful, but I definitely noticed a difference. Maybe it was that React foam felt a little bit softer, but I felt like more of the rocks were being transmitted and that sensation of the trail was coming through my feet a little bit more in the Terra Kiger 5 than in the Wildhorse 5.

So I think that there’s really ultimately two ways that you can look at the differences between these two shoes.

Taking it from a road runner’s perspective, what I kind of first got to say is the Wildhorse 5 is the daily trainer and the Terra Kiger 5 is the faster day or the race shoe.

But I think that you could look at them as two different tools for different jobs depending on the type of terrain you’re going to encounter or expect to encounter on any given day.

I think that Terra Kiger is something that can take light to intermediate trails depending on just how rocky and how gnarly things are going to get while you’re out there.

But if you know that things are going to get pretty tough and you’re going on an intermediate-level trail that’s going to be a lot tougher and a lot more uncertain in terms of what you’re going to encounter, then I might reach for the Wildhorse 5.

Whether it’s the Phylon midsole or the differences in the way that the rock plates implemented, I just feel like my foot is a little bit more protected from the trail when it’s inside the Wildhorse 5.

So those are kind of the two ways that I would tend to look at the differences between these two shoes.

So those are my thoughts on the Nike Terra Kiger 5 vs Wildhorse 5. Let me know in the description if you’ve had a chance to run in those shoes and whether I’m totally off-base or if maybe I’m starting to figure out trail shoes just a little bit. 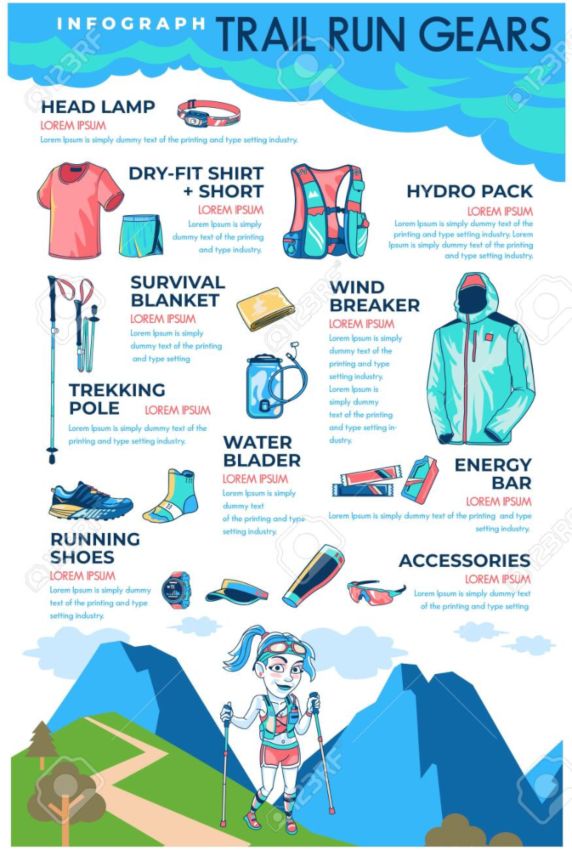