I’m going to talk about what the shoes are, the similarities, the differences, all that good stuff. 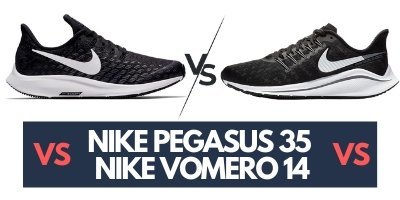 In the past years, the Nike Vomero and the Pegasus have been quite different. The Pegasus was an everyday semi-lightweight trainer and the Vomero was a heavier, cushy workhorse shoe.

But in this update, the Pegasus and the Vomero are a lot more closer than we’ve ever seen before. They both fit in a very similar spot in terms of what they’re used for and the type of runner that they’re trying to attract.

Ultimately, the fit is similar in terms of the snugness of the shoes and the responsiveness is similar.

Right now, you can find the Pegasus 35 for literally half the price the Vomero is.

Both shoes feel very similar in the midsole and a lot of that because they have a full Zoom Air pocket from the heel to the forefoot. But the main difference in these shoes being the cushion that wraps around that Zoom Air pocket.

But the main difference is the material that’s combined with the Zoom Air pocket.

The Nike Pegasus 35 features Cushlon foam with a full-length Zoom Air in the midsole. The midsole on the Pegasus has offered one the smoothest rides for years and it’s even better because it’s full-length.

Then Nike went and put that same full-length Zoom into the Nike Vomero 14. In the Vomero 14, Nike has combined that full-length Zoom Air pocket with the React cushioning which is really plush and soft. That’s the same React in the .

The setup on the Vomero 14 has a little more of a plusher feel to it because of that React, but I still feel the Pegasus 35 has its place.

The Pegasus 35 feels a little more engaged and the stride just flows a little more smoothly. The ride on the Vomero 14 is also pretty smooth and you’re getting a little more cushioning with the React foam which definitely helps the overall ride of the shoe.

The outsoles on both shoes are pretty much the exact same thing. There’s a Pentagon pattern in one shoe and a Hexagonal pattern on the other.

Does it make a big difference?

I don’t really think so.

The upper on the Vomero is a little thicker, a lot more structured, and the lockdown is a lot more secure.

Other than that, the FlyWire is about the same and the lacing system is the same. They both have the same flaring out heel collar which seems to be the trend for most running shoes these days.

So, which shoe is closer to my heart?

I still want to lean towards the Pegasus 35, but I love the Vomero as well. Besides the Vomer having React Foam and a little stiffer of an upper, both shoes are pretty much similar. I think they almost work for the same purpose.

If you want to say the Vomero 14 is a better shoe, I won’t argue with you as it’s going to be a preference of taste.

So let me know if you’re team Pegasus or team Vomero.

Now I think the real interesting discussion isn’t so much Nike Vomero 14 vs Pegasus 35 because they overlap so much.

I think the real discussion is Pegasus 35 Turbo vs Vomero 14.

Both these shoes look extremely similar and they borrow a lot of design cues from each other, but they are very different shoes.

The Pegasus 35 Turbo is a great shoe and it’s meant to go fast. The turnover is really quick and snappy. You can take it for longer runs and you can race in it and get your new 5K PR.

So, although the Pegasus 35 Turbo and the Vomero 14 look similar, they feel really different.

The way to think about all these different shoes in the Nike lineup right now is it depends on what you’re looking for.

I don’t think that the idea of like is this the best shoe or what shoe should I get is a fair question.

I think you have to think about it in terms of what other shoes do you have in your closet.

If you’re only going to get one shoe, I absolutely think you should be getting the Pegasus 35.

If you’re a couch-to-5k kind of person, you want to get back into running, you need a shoe for a little bit of cross-training and some treadmill time or maybe some elliptical and a little bit of outside running, again, the Pegasus 35 is where you’re going to go.

The Pegasus 35 is the shoe that kind of appeals to most people most of the time.

Again, if you’re going to get one and only one shoe, you can get the Pegasus 35 for an amazing price easily.

If you’re preparing to race for a 5K or 10k and you want two shoes, then I still think the Pegasus 35 is kind of like the foundation of that. Then you would mix in the Pegasus 35 Turbo because this shoe likes to move a little bit quickly.

If you’re new to running and racing, you want to spend most of your time still in that Pegasus 35. But on race day when you want to feel a little bit extra special and you feel you have some extra wind at your back, then the Pegasus 35 Turbo is going to be a really great addition for distances 10k and less.

Then, if you’re moving from 5k or 10k and you feel you want to try a 10-mile or a half marathon, I still think the foundation of that is going to be the Pegasus 35.

And if you’re using two shoes, I think your fast race-day shoe should be the Zoom Fly Flyknit.

The Zoom Fly has React foam in the midsole wrapped around the carbon fiber plate. The way that I think about the Zoom Fly is it gives you a really strong push-off.

But because it’s got React and React is a pretty resilient foam, I think any of your tempo runs or your medium to longer distance runs where you want to get up towards that half marathon pace to see how you’re doing in that regard, The Zoom Fly is going to be great.

Most of your miles are going to be in the Vomero 14. The Vomero is going to be your relaxed and your more comfortable miles, recovery miles, and some of your medium pace moderate effort miles, too.

And then when you want to pick it up a little bit, you’ve got the Zoom Fly Flyknit for all of your faster work and harder days or any time that you might be spending on the track.

If you’re now moving towards training for a marathon or you’re running just a lot more frequently and you’re into three shoes in your rotation, here is my dream lineup.

Last but not least, the Vomero and the Pegasus are two reliable shoes for standing all day from Nike.

I hope this Nike Vomero 14 vs Pegasus 35 backs up the idea I talked about earlier in terms of where your running shoes fit with the other shoes that you have.

And if you’ve run in one of the running shoes above, feel free to share your experience in the comments section.