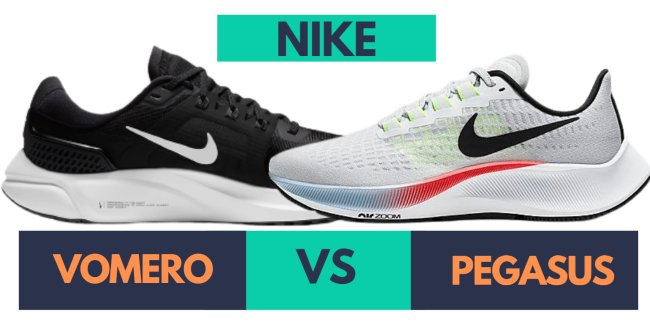 Today we’re going to be comparing the Nike Vomero vs Pegasus. One shoe I wasn’t a particular fan of and another one that I’m really beginning to enjoy, but actually, they look relatively similar on the outside.

We’ll go through the pros and cons of both of these shoes and I’ll give you my final verdict at the end as always with all comparisons.

This is not a technical overview. This will just simply be pros and cons of both shoes.

So, without further ado, let’s dive in …

The Pegasus 37 is a 24-millimeter stack in the heel and 14 in the forefoot giving you a 10-millimeter heel-to-toe drop. I did indeed go true to size.

The Vomero has a 26-millimeter stack height in the heel and 16 in the forefoot for a 10-millimeter heel-to-toe offset.

So, even though the Vomero has a higher stack height than the Pegasus, both shoes offer the same 10-mm heel-to-toe drop. This means that fans of the Pegasus have nothing to fear and they can wear the Vomero and not worry about the heel-to-toe offset.

Both the Pegasus and the Vomero are true to size, which is absolutely perfect.

Related: Hoka One One Bondi vs Clifton

I think this is where the Vomero does it well. It’s got the weight distribution so great.

I’ll show you where some of that weight has been added. I think the heel counter and Achilles area is even thicker and more plush than the Pegasus, which is fine because it’s a kind of a daily trainer.

Also, there’s this big plastic heel cup just to add a little bit of support and a bit of rigidity in and around the back.

As opposed to the Pegasus’ outsole where you’ve got some grooves and cutouts, on the Vomero, you have complete full rubber covering, which is going to be where some of the weight is added.

I wasn’t a massive fan of the Pegasus. It has started to come to life towards the end for me, but mediocre, average, and bordering on good at best.

This Pegasus for me is kind of the epitome of what is wrong with Nike at the moment and that is the fact I personally hate the React midsole.

Let me explain why if you’re new here …

My feet are relatively big and React goes crazy heavy when you get up to my size.

I remember speaking to many people saying the Asics Nova Blast, the New Balance 1080s, and the Pegasus 37 are all weighed in and around the same.

Related: Hoka One One Clifton vs New Balance 1080 Side by Side Comparison

Some say the Nova Blasts and the New Balance 1080s weigh slightly more than the Pegasus, but in my size, the Pegasus is heavier.

So, React midsole cushioning really does go like a brick when you get it up into my size.

This React midsole is also the thing I hated about the Zoom Fly 3. The bottom felt so heavy with the React midsole.

Let’s shift our attention to this beauty.

The Vomero 15 doesn’t use React. It feels a lot more of a softer spongier foam and it has a nice bigger airbag in the forefoot, which from the off, I noticed no requirement for a break-in.

I literally put this on, walked out the door, started running, and smiled and that is a good sign.

I felt it was kind of like that relief of “oh, I finally paid full price for a Nike shoe and I’m getting bang for my buck.”

And then we’ve got Zoom X in the heel which I was kind of really pleased with in the beginning.

Now, I’m starting to think what’s the point in putting your highest-wearing softest foam in the heel. What’s the purpose of that?

I guess it’s for people who are heel striking. I was trying to sit back on my heels as I was going down some hills more recently and I really did notice the cushioning in the heel counter area.

It does actually feel really nice, but as a midfoot striker, it’s pretty useless back there, to be honest with you.

Nike were excited to announce that they were going to put an airbag in the forefoot of the Pegasus and it’s why I tried it.

I didn’t really want to try it because I’ve had some negative experiences with the React midsole.

I thought the airbag might break things up and might make it feel a little bit more responsive and a little bit less like a brick.

It started to towards the end of the hundred miles that I put into this shoe, and even by the end of it, it wasn’t a particularly enjoyable experience. It was just a little bit more bearable than what it had been.

So, lacing the Pegasus up straight away the first couple of rounds, I was extremely disappointed because I could kind of feel the airbag, but it really wasn’t doing a lot.

To be honest with you, that’s about it. I mean in terms of how good it is, I can’t give it high praise.

So, the top half is great, but the bottom half isn’t so good.

The Vomero has a bigger airbag. I think it’s double the size of the Pegasus and that’s where they’ve got this right not to mention the fact that it does not use React foam, which is another big bonus for me.

Also, the main bulk of the foam that they are using to surround this airbag is really comfortable.

Once again, just like the majority of Nike shoes, the top half is absolutely spot on, but the bottom half is where they’ve got the Vomero a little bit more right.

The upper material is a dual-layer mesh and it feels really nice. I’ve got to be honest with you, the whole top half package of the Pegasus 37 is nice.

I like the relatively plush heel counter area which feels good. For a daily trainer, I’m looking for that comfort.

There’s a nice breathable upper with some ventilation holes across the top. Again, this a different kind of upper to the Pegasus 37, but it’s still a very comfortable upper.

Also, I have no problem with width because I have a wider foot, but the upper sits nicely on the top of my foot.

Nike tongues have always worked well for me. They’re a bit of an angle so they slant off to the side and they wrap nicely around your ankle.

So, the tongues are very similar. It’s thin at the top and then the padding kicks in as we hit the laces.

The laces are a little bit short on the Pegasus but really nothing to grumble too much about.

There are extra bits of fabric on the eyelet chain, but they could have done away with them and simple holes in there would have been absolutely fine. Yet, no problem with the lockdown.

The laces feel very similar by the way to the Pegasus 37 if not very much the same, but we don’t have those extra flaps of material.

It’s not Nike’s flywire but something similar. I used to struggle with flywire in the shoes I had, but this doesn’t stretch as much as flywire. I used to find the flywire stretched a bit and my foot would come loose.

What I do like which is quite a common trait with some Nike shoes that I’ve been trying is that the toe box is relatively shallow in these shoes.

What the Vomero is Great For

the Nike Vomero 15 is a daily trainer and it’s going to do easy and steady on moderate miles, but it’s really not going to do a lot more.

It’s absolutely fine on long runs if you’re going easy. It’s certainly not a speed day shoe at the weight it is and it’s certainly not one of those poppy shoes that’s going to get you up on your feet.

However, it does provide the comfort I was expecting from the Nike Pegasus.

As I said, the React midsole is the epitome of what, for me, is wrong with Nike at the moment.

I love the top half of the majority of Nike shoes to be honest with you. They fit my foot shape beautifully, but it’s what they put on the bottom that just goes wrong, which, for me, is what they’ve got a little bit better and a little bit more right going in the right direction with the Vomero.

So, what I’d love to see is something like the Pegasus become the Vomero because like the Brooks Ghost, the Pegasus is Nike’s staple daily running shoe in their lineup and that’s been going for years.

It’d be great to translate what they’ve done with the Vomero in terms of the midsole.

I’d love to see the Pegasus lose this React and use this foam in the Vomero because I think the Pegasus would really win the hearts back over some of the die-hard Nike fans that have kind of gone off the boil with them because they’re disappointed with last year’s releases.

Also, what they could do with the Vomero is kind of streamline it a bit and just do something a little bit different.

When I put my foot in the Vomero, the first thought was this is exactly what the Pegasus 37 should have been.

The Nike Vomero 15 is obviously my preference over the Nike Pegasus 37. For me, the Pegasus is a very standard mediocre shoe.

The Vomero is more expensive than the Pegasus, but I’d much rather pay extra money to have the Vomero.

Yet, it doesn’t blow my mind with how good it is, but it’s solid and I’m happy to pay the full price for this shoe.

Am I happy with the Nike Vomero 15?
Yes.

Is it delivering what I want it to deliver?
It is.

Would I buy multiple iterations of this shoe if they are serious enough to keep enhancing it?
I would.

I really do enjoy the Vomero and it’s a solid daily trainer that I would go easy long runs and moderate miles.

So, there you go. Those are my thoughts on the Nike Vomero vs Pegasus. I hope all of that made sense, but if you have any questions, make sure you leave them in the comment section below and I’ll do my best to get back to you.

I’m super excited to see actually what happens with the Vomero 15 because I’ve seen rumors that actually they’re going to ditch a worldwide release and move straight on to the 16 and the 15 is just purely going to be released in the UK and a few other countries.

I’ve heard rumors once again because I’ve seen a picture of the Vomero floating around on Instagram that it might be a summer release.

Who knows? It’d be great to find out more on that. I guess we’ll need to sit tight and see what happens.

I’m also keeping my eye on the Invincible, which is another Nike shoe that does not use React foam.

I’m keen to see what that’s all about so let’s keep our fingers crossed that we can get that at some point soon.

Anyway, if you enjoyed today’s comparison, please make sure you share it on your favorite social media platform.

I’ll see on the next one.