In this special comparison series, we’re going to be comparing the Nike Zoom Fly vs Pegasus Turbo iterations.

And today, I’m delighted to be bringing you guys a comparison on the design and the performance aspect of the Nike Zoom Fly 3 vs Pegasus Turbo 2.

Nike Structure vs Pegasus – Who Are They For? 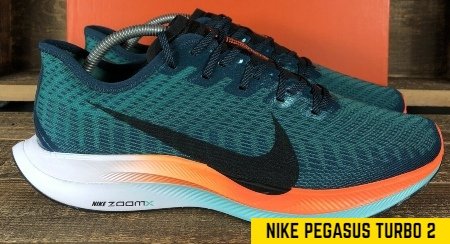 These are two shoes that I bought in 2019 with high hopes and today I want to go through the pros and cons of both of the shoes.

I’m going to give you my kind of overall verdict on both of these trainers.

Just before we start, the Nike Zoom Pegasus Turbo 2 has 43 miles in it and the Zoom Fly 3 has about 120.

So the Pegasus Turbo is the new running shoe in my rotation and I am still playing catch-up with it a bit in terms of mileage.

But, I can safely say that I have put easy runs, workouts, and a long run in the Pegasus already, which is good.

So, I’ve done the full suite of runs in it and I have a good feel in this shoe and I know what it’s going to be like going forward.

Without further ado, let’s dive in.

Let’s start off with the technical comparison. There are some very big similarities between these two running shoes and some very big differences.

We’ll cover all of that now before we get into the performance side.

So, in terms of what we normally do, we start at the heel and we work our way down the laces to the upper and then to the midsole and the outsole. 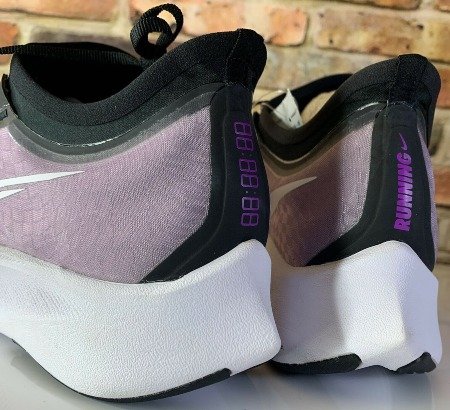 Both the Nike Zoom Fly 3 and the Pegasus Turbo 2 feature a very thin heel area. I’ve experienced a little bit of heel slippage in both of these shoes.

Both of these feature a similar design in the inside. They have two of what I call bumper padding sections that sit just below the ankle bone.

It’s a very comfortable feature and I have no issues with that whatsoever. I’m guessing that’s just to make sure you have a little bit of protection there rather than just this complete thin material all the way around.

Other than that, I’ve experienced no other than heel slippage, no blisters, no Achilles issues, nothing there. That’s perfect. 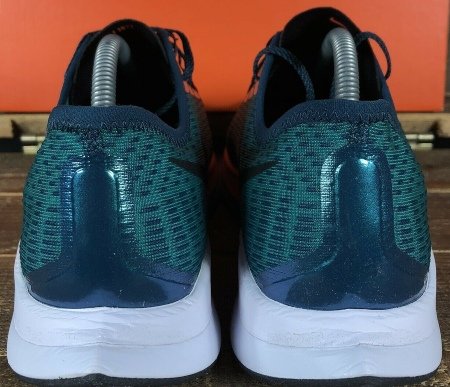 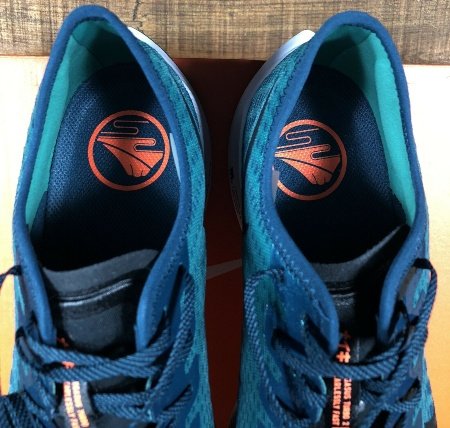 The Zoom Fly 3 has this kind of sock-like slip-on feel in this what I would call wetsuit material.

It’s all one piece and there’s no separate tongue, whereas the Pegasus Turbo 2 has a very thin material tongue. So, it is a separate element there.

Regardless of if they’re attached or not attached, both of them use this very thin material there.

Again, I’m guessing they’re doing that to keep the weight out. 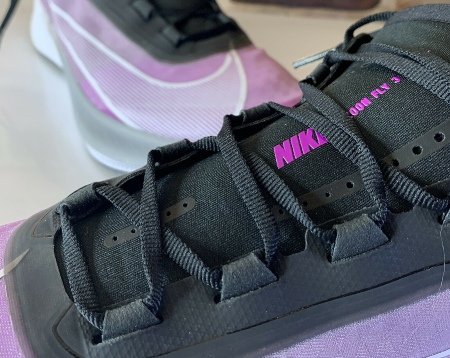 Moving down to the laces, both of the Pegasus and the Zoom Fly feature pretty much exactly the same laces in terms of the laces themselves and the locking lacing system.

The Zoom Fly 3 uses tabs to hook in the laces and the Turbo 2 is using more traditional holes down the side there.

I’ve experienced no issues with getting a lockdown feel and they both feel absolutely great. 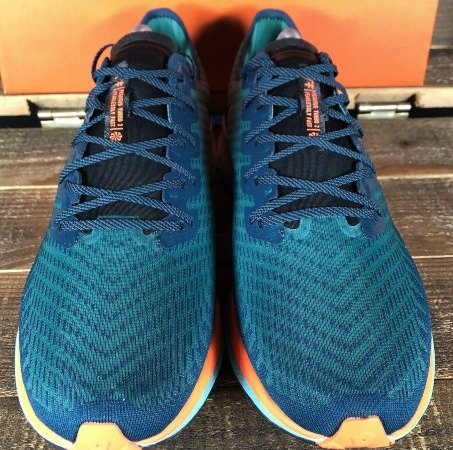 The Nike Zoom Fly 3 uses a nice new technology called the VaporWeave. You might have heard a lot about that in the Next% and it was a big deal. It’s a bit more waterproof than the kind of Flyknit that they used to use.

Personally, I don’t have a problem with this material. It does cause a little bit of ruffling up and around the toe box area, but to be perfectly honest with you, I don’t notice a massive difference.

My feet are quite wide so they do stretch to the edge of material anyway so I don’t get too much of a ruffling. People with more narrow feet though do tend to experience that.

The difference on the Turbo 2 is that we have a more machine-knitted upper which goes all the way around.

So, we’ve got the VaporWeave material and we’ve got the knitted material. I can’t comment on the fact whether it soaks up the water and gets heavier running in the rain. I haven’t run in it in any downpours yet, but so far so good in the Nike Pegasus Turbo 2. 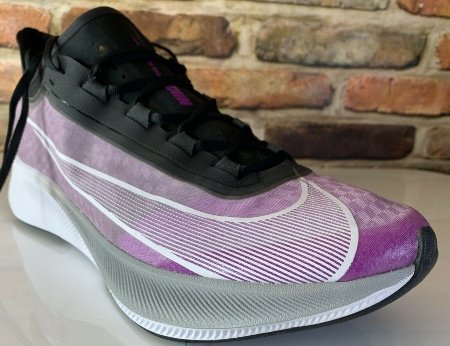 If we move on to the midsole, there’s another massive difference here.

I can confirm that the Zoom X is a lovely midsole and it is really good. And then if I compare the two, I do actually really enjoy the Zoom X midsole that you’ll find in the Pegasus Turbo 2.

The Zoom Fly has issues but I cannot fault the midsole. 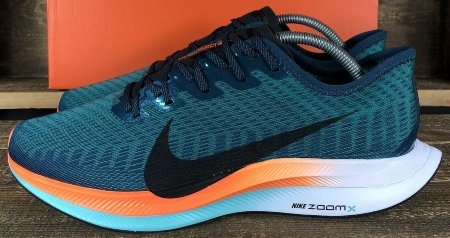 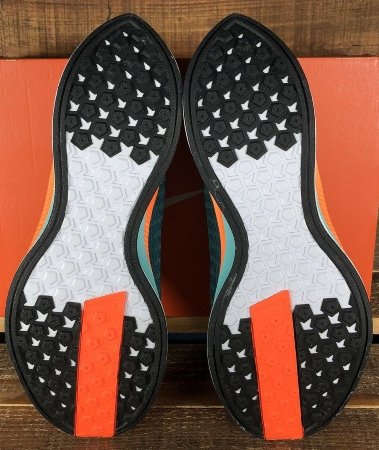 Moving on to the outsole of the Zoom Fly, we’ve got some durable rubber placed in the more high wearing areas, which is very similar to what you’ll see on the Nike Next% whereas the Turbo 2 has a more all-over outsole rubber material.

We’ve got the high wearing rubber and a little bit of exposed midsole there, but that’s about it to be honest with you.

So, in terms of the technical overviews, both of these shoes are extremely well-constructed. I’ve had no issues fitting because they fit true to size for me.

And in terms of weight, they are both very lightweight shoes. 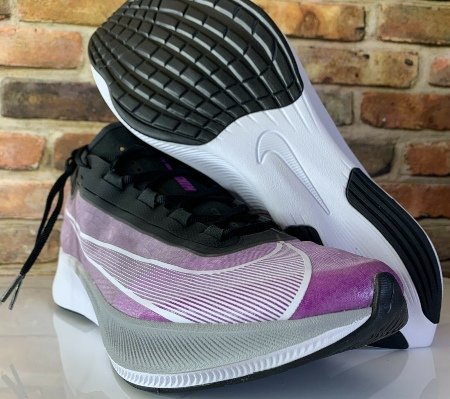 Now, let’s dive into the juicy bit, the performance. What are the pros and cons?

I bought two pairs and used it for three marathons, which is just incredible. I’m still using it to this day. In fact, I only used it a couple of weeks ago in my latest race, such a good shoe.

I missed the middle version, but I guess when you go for the next iteration, you hope as models go on that the technology gets better and the shoes get better.

However, the Nike Zoom Fly 3 just, unfortunately, did not get better for me.

It is such a clunky shoe and it is so front heavy with the carbon plate. I don’t know what they’ve done in the forefoot area of the shoe, but it just constantly feels like your foot is dragging you forward.

It’s the most bizarre feeling and I did not get that wow factor when I put it on.

I had no problem with the VaporWeave upper material itself, it’s just that the upper was comfier in the original version.

Again, I had no problems, no blisters, and no issues with the Zoom Fly. It’s mainly the weight distribution that I’m struggling with a bit.

The shoe is heavier than the original and I feel it’s going in the wrong direction. However, I have to say that every time I’ve worn the Zoom Fly, I’ve raced in it, I’ve trained in it, I’ve done long runs in it, it delivers.

It delivers the pace, it delivers the duration, it causes no issues, and I can’t complain. It’s a love/hate relationship with this shoe and I will continue to use it because I spent so much money on it that I am NOT going to let it go to waste.

But it is not something that I look at every day and get inspired and go ‘this is going to make my run better’.

So, in terms of pros and cons, the weight distribution in the Nike Zoom Fly 3 is poor, the upper is far less comfy than the original, but the main pro is it delivers and it works.

I’m not going to knock it too much, but would I recommend it for the price? Not a chance.

If we move on to the Pegasus Turbo 2, as I said, it’s quite new to the rotation. Certainly, this is not so much geared up for more racing like the Zoom Fly.

From what I can see and gather, the Pegasus Turbo 2 is certainly more of a daily trainer that you can do a lot of things with.

I’ve taken it on the trails, on the roads, and it’s working in all scenarios. However, I have to be honest with you I wouldn’t race in it.

The Turbo is lighter than the Zoom Fly, though, but I just don’t get that snappiness feeling that I would want in a racer.

It kind of almost feels like it’s a little bit of a racing flat, but it’s just gone a little bit wrong. It’s a bizarre feeling and actually, the weird thing with this shoe is Zoom X foam is really good.

So, comparing the React and Zoom X, the latter is a better midsole. It feels like it’s going to last a duration. It’s just comfortable and my feet feel good.

The upper is far more comfortable than the Zoom Fly and I much prefer the knitted upper. It just hugs your foot better than this kind of plasticky VaporWeave material on the Zoom Fly.

Despite the fact that the lacing systems are very similar, I prefer the lockdown feeling that I get from the Pegasus Turbo 2.

The main downside I feel for me is that I paid a lot of money for the Pegasus Turbo 2 and I just don’t feel like I’m getting my money’s worth of value back from the shoe.

However, does everything mentioned justify the price point? Not in my opinion.

I think the bottom line for both of these shoes for me in terms of pros and cons is that they both work and they both do their job.

But are they worth the money? In my opinion, I’ve run in far better shoes so I’m going to have to say no.

Last but not least, the Zoom Fly and the Pegasus are two great shoes for standing all day from Nike.

But of course, I’d love to know your thoughts in the comments below.

I’d love to know your thoughts.

So, that’s it for me for this Nike Zoom Fly vs Pegasus Turbo. Happy running and see you on the next one.