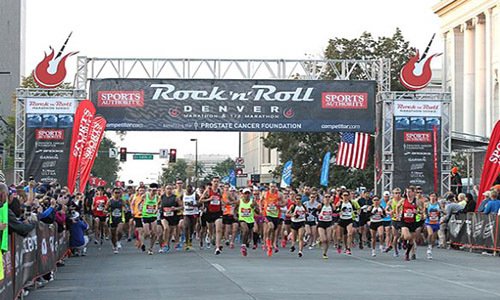 I ran my third half marathon this past Sunday. While the race itself was great, I’m extremely disappointed in myself. Running is a mental sport and I lost this time. But let’s back up first.

Bib and shirt pick-up was quick and easy. I had my bib, shirt, and bag within 10 minutes. Funny story: there was a table handing out free samples next to shirt pickup. While I was getting my shirt, Ryan collected a handful of samples. He didn’t even pay attention to what he was grabbing until I pointed out that he had about six sample packets of Vagisil. He couldn’t get rid of them fast enough!

The next stop was the official merchandise area. We went on the second day of the expo, so everything was pretty picked over by that point. I did manage to snag a cute shirt, though.

At that point, I was pretty much done. I don’t like crowds, so the vendor booths did not look appealing at all. Ryan, however, is all about the free samples and checking everything out. He convinced me to stay and I’m so glad he did. We found a lot of cool stuff, including a charm for my half marathon necklace, an electronic massager, and a free bag of dog treats for Bailey.

A Handana. Has anyone used one before? You wear it on your hand like a glove and use it to wipe sweat and snot (gotta love nasty runner things). The girl at the booth also pointed out that it’s a good place to tuck a key, which is great since, despite my best efforts, not all of my running clothes have pockets. I’m excited to use it. Naturally, I picked one up for my mom too.

Another early race morning! I woke up around 4:30, so we could leave by 5. The race started and ended in the same park as the Hot Chocolate run, so it was easy to find and park. There were lots of port-a-potties and we had plenty of time before the race. The only downside was it was cold!

The corrals were well-marked but extremely crowded. The 5k, half marathon, and full marathon all shared the same start line and time. I thought that would be frustrating when we started running, but it really didn’t cause any problems.

After freezing for an hour, it was time to start. The first part of the race went great. I was careful not to go out too fast and even though there were some major hills, I was feeling good. The weather was perfect for running and the route gave us an amazing view of the mountains.

At Mile 8, I started to pick up the pace. My goal was to beat my PR of 2:22:59. I knew if I stayed strong for the last part of the race, I could do it. Around Mile 10.5, though, I really started to struggle. I don’t know why but lately on my runs I start to feel nauseous. It started this summer and I originally thought it was because of the heat. This run and the Hot Chocolate run weren’t warm though, so now I don’t have any idea what causes it.

Anyway, I stopped to walk and that did me in. My head started to play games with me. I tried to figure out if I could still get my time and my math said I had lost it. The last 2 miles were the worst. I alternated between running and walking. I could have ran it all, but my head told me differently. I’m so mad that I let that voice win. Especially when I crossed the finish line at 2:24:36, less than 2 minutes away from my goal.

This will probably be my last half for a while. I have a 10k in about a month that I really want to PR and I want to improve my 5k time before the year is over. The next few months will be about speed, so when I do my next half I’ll hopefully be able to smash that time. I’m also going to work on mental strength so next time I’ll be strong enough to tell that quitter’s voice where to go.

How do you stay strong when running? What do you do to quiet that voice in your head?