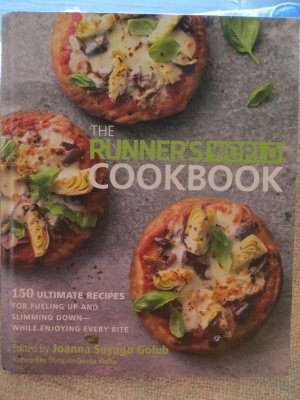 Like many people, I eyed the Runners World Cookbook with interest when it came out but never got round to buying it. The Amazon reviews were good, but I need to SEE a cookery book to want it. However I entered a giveaway on Ali’s blog and somehow, given her large readership, I won. Shortly enough, it appeared at my front door…and I kind of fell in love with it.

It is PACKED full of beautiful recipes and photographs. Plenty of vegetarian recipes for me but also plenty of meaty ones for my carnivores. Lots of info about the nutritional benefits of the different recipes and how they fuel pre-run or aid recovery. The recipes are put together by nutritionists but there are several contributed by Scott Jurek and Deena Kastor. Being completely honest, this is one of the best cookbooks I’ve ever had. I’m literally working my way through it.  So far I have made about 15 of the recipes and they have nearly all turned out brilliantly. The best recipes have been the chocolate chip cookies and the chocolate brownies, which were so good that the Dude exclaimed ‘Oh my word, these ARE good’ as if I usually poison him. The Sweet Potato & Lentil stew was delicious and hit the spot. The maple brussels sprouts were so gorgeous that they actually converted my son into a sprout eater. And the chickpea-pesto tomato soup has become a family regular. A few recipes haven’t worked out. The vegetable dahl wasn’t great, although some salt perked it up. Also I am very unconvinced about spiced breakfast quinoa. Quinoa is definitely not meant for breakfast consumption. And I was banned from ever making the tofu stir-fry again. But that was more to do with tofu than the actual recipe. So what I’m trying to say is….this cookbook is awesome. I won mine but I will buy numerous copies for friends in the future and I genuinely think you should buy it too!