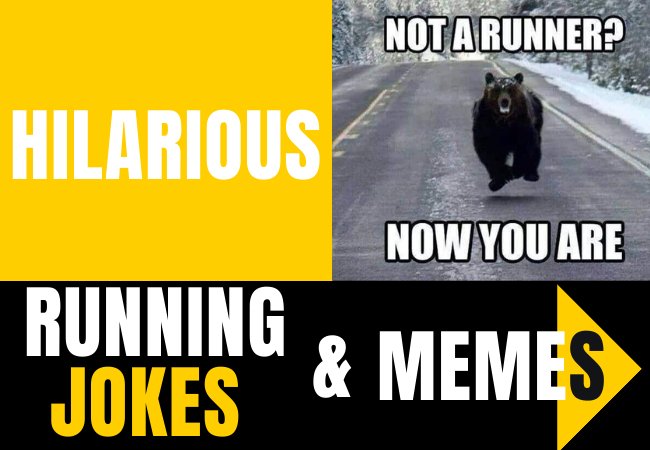 Today, I’m going to share some of my best running jokes and memes.

I’ve always been a sucker for running jokes and I guess you are too.

Frirend: What should I do if I see you collapse?
Me: Pause my watch.

Run? I thought they said rum…

I run slower than a heard of turtles stampeding through peanut butter, but I run.

After running for one minute. I’m still alive but I’m barely breathing.

Friend: I don’t run. And if you see me running, you should start running too.
Me: Because something is certainly chasing me.

No matter how slow you go, you are still lapping everyone on the couch.

Running takes balls. Other people just play with them.

Running is like coffee. I’m much nice after I’ve had one.

Cheer up! They said runners will survive the zombie apocalypse.

Q: What did the coach say after watching his runner complete a mile at marathon pace?
A: “I’m sorry—could you repeat that?”

Knock, knock.
Who’s there?
Beak.
Beak who?
No, not yet—but I’ll make it to Boston one of these years.

Knock, knock.
Who’s there?
Orange.
Orange who?
Orange you glad I didn’t show you my toenails?

Q: Why did the runner cross the road?
A: Because that’s where the less-crowded aid station was.

Knock, knock.
Who’s there?
Eyesore.
Eyesore who?
Eyesore from my long run—can we take the elevator?

Did you hear about the ultra runners who lived in different cities? They had a long-distance relationship.

You know you’re a runner when you take a rest day and instead of feeling relaxed, you feel restless, angry, and what are those? Tears for no reason? Yup. You’re a runner.

When you’re winning the race but two other runners try to pass you at the same time.
You: No. One crisis at a time.

My life without running would be like worn-down spikes … pointless.

Teacher: Johnny has 17 pair of running shoes. He buys 3 more. What does he have now?
Me: Happiness. Johnny has happiness.

Me lying about my times on the starting line:
Me: Believe it or not. I’d be a sub-4 miler if I didn’t get hurt.
Runner: Elaborate on that?
Me: No.

Running on busy sidewalks like: By all means, move at a glacial pace. You know how that thrills me.

When your friend tells you they also like “jogging”:
You’re flirting with cardio. I am married to cardio.

Not a single person asked me if I could run faster in my new shoes today. Being an adult is stupid.

Why did the runner cross the road?
Their GPS was 0.01 miles short.

When you’re following your training plan and wish you had more runs scheduled.
Me: Give me more homework. It’ll keep my mind off my life.

TFW the road is totally empty for your whole run … until you have to fart.

A shark could swim faster than me, but I could probably run faster than a shark. So, in a triathlon, it would all come down to who is the better cyclist.

TFW Aunt Carol is all, “you know the first man to run a marathon died,” and you’re all, “well, indoor capacity for holiday gatherings is ten, and you make eleven, so you GOTTA GO.”

Me: Takes insanely good care of every sports bra I own.
Also Me: Has never washed my regular bra… like ever.

So what really made you decide to join cross country? I’m really bad at making decisions

I named my dog five miles so that I can say “I walked five miles every day.”

TFW you haven’t run in a while and your running shoes look at you like they miss you.

Doctor: Do you exercise?
Me: I’m a runner. I run from my problems, I run late, and I run my mouth.”

When there’s someone else in the car.
Me: See the mountains over there, the big ones … I ran over them!

When there’s someone else in the car.
Me: See the mountains over there, the big ones … I ran over them.

TWF a regular friend becomes a running friend and you’re all like, “All for run and run for all.”

Actual text from my 2x XC state champion cousin, Blake:           Just because the Turkey Trot is virtual this year, doesn’t mean you’re not going to go down.

Disney’s latest release for runners: “All Toenails Go To Heaven”

You know you’re a runner when … you get jealous when you’re driving in your car and pass runners.

How to become a morning runner:
1. Lay out your clothes the night before.
2. Go to bed earlier than usual
3. Plan a way to reward yourself for getting up.
4. Like, I dunno, going back to bed.

So ladies, if the run is long,
And you want to feel real strong,
Dial 1-900 RUNALOT,
And Kick them doubtful thoughts
Baby got truck…

This Halloween I’m going to dress up as my favorite runner: Dr. Anthony Fauci.

Are you a hurdle?
Yes. Why?
Because I fall for you every time.

“I’m gonna get him a race entry he can’t refuse.” – The Jogfather.

When you want to buy new running gear. In terms of money, we have no money.

Pick up line for runners:
Is there friction between us, because I’ve been chafing you in my dreams all night.

Turn around, every now and then I get a little bit terrified and then I see there’s nine more miles. Turn around, bright eyes, call my coach I’m gonna fall apart AND I NEED YOU MORE THAN EVER
(Insert 80s extreme drum solo here)

Not Fast, Just Furious: The new blockbuster hit about an angry runner in desperate need of some speed work.

Long runs are the perfect time to overthink all my problems.

Fun facts with Squidward.
No one cares about your mile time.

Chubby Bunny: a game that actually originated when runners tried to see how many ice cubes they could fit into their sports bra during a long run.

The first mile is a liar. Never trust it.

I lost a toenail after my long run. I made sure to say a few kind words for it, it really hung on there in the end.

Every runner friendo is a gift.
Every mile you experience together brings you closer to your goals, closer together, and closer to bRUNch.

Des Linden: Relax and let the run come out of you.
Me: I’m so relaxed, and a lot more than the run has come out of me.

That first run back after injury always feels like a dog must feel when their owner lets them off the leash to go chase a squirrel.

Me: Hasn’t bought new jeans in 10 years and refuses to spend the money to do so.
Also Me: Pre-orders $300 worth of new running shoes BC OMG NEW COLORS.

Me: I won my age group.
Friend: No one else was in your age group.
Me: It still counts.

Please stop asking me what I’m doing this weekend. Running. This weekend. Next weekend. Every weekend. Forever.

Just because you can jog 20 minutes it doesn’t mean XC is easy.

You can’t be slow if you don’t check your times. Modern problems require modern solutions.

Theaters don’t need to reopen. The sold out run of Cirque Du Sore Legs is being played in my living rooms eight nights a week.

Ever feel like your foam roller is watching you? Like no matter where you sit in the room, it’s always there, lurking in the corner, disappointed in you.

TFW you have a serious food baby and you’re all, “Just a little run in the oven.”

Runners guilt: TFW you snoozed your alarm seven times so you didn’t have time before work even though you were up any way just scrolling through Instagram and now you need to find another time during the day to squeeze it in and Lord knows when that’ll be.

Me: I’ll run at my own pace.
Also Me: Pretending to secretly race the person next to me.

If runners ran the world, it would be mandatory to have slip-n-slides on every front lawn everywhere between the hours 5 am and 9 am in the summer.

“I just decided to stop running until Garmin gets its crap together. After all, if it’s not on Strava, it didn’t happen.”                 – Craig Engles on why he suspended his Strava account due to a ransomware attack on Garmin.

If you consider yourself a “real” runner, that means that there are runners out there who aren’t “real.”, which means they are ghosts. And tbh, I’d rather be a ghost.

So, there you have it. Those were some of my favorite running jokes and memes.

I hope you found some new ones today. And if you have any running jokes, please share them right below.