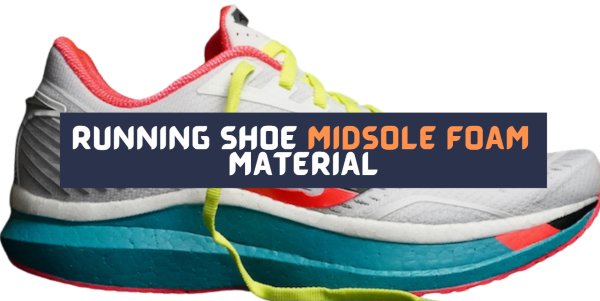 I’m going to be looking at the midsole foams used by Adidas, Nike, Reebok, and Saucony.

So as 2021 gets off to a roaring start, I’m keen to see where running shoe companies take their different midsole foams over the next 12 months.

First off, I want to look at each company’s midsole foams to give you a bit of a description to try and unlock the secrets.

Some people are a little confused as to what the properties are of each midsole foam.

Some of the key ones to watch out for are LiteStrike and LiteStrike Pro. You’ll see LiteStrike in the SL20 series and it’s also utilized in the current Boston 9 alongside boost.

It’s certainly a little firmer and a little less compressive but very resilient and most importantly nice and light.

LiteStrike seems to be relatively durable right now and Adidas also utilizes it to provide some sort of cage and protection to other midsole foams.

The LiteStrike Pro in the Adidas Adizero Adios Pro is much more compressive than LiteStrike.

You could say squashy, very resilient though, and extremely light and malleable. It’s certainly very quick to return to its form giving you some very good energy return.

Clearly, LiteStrike and the Pro variant of LiteStrike are at the forefront of the German shoe masters’ mind.

I think big hits like the SL20 and the Adizero Adios Pro have shown some real potential to boost the performance of those runners. We’re seeing incredible performances over those common distances.

I think LiteStrike first appeared in a basketball shoe. It was developed not to pack out at all or compress over time but still be exceptionally light and responsive.

That basketball shoe where LiteStrike appeared was the next level. It uses the same foam as we find in the Sl20, the Boston 9, and the Adizero Pro.

There is very limited information though as to what LiteStrike Pro is actually constructed and made out of.

It’s clear that Adidas sees this as their flagship foam for 2021 and I think everybody’s looking forward to that soft forgiving and compressive foam in the form of those new models, the Adizero X and the Adizero Adios Pro II. Both shoes are coming with gargantuan stacks in the heel and forefoot.

Obviously, React is in a number of their shoes right now. They’ve got it in the Pegasus 37, the Miler, and in the React Legend 3 Shield.

Of course, we’ve got a mixture of both React and ZoomX in the Tempo Next% so you kind of got the best of both worlds.

There’s that quite dense and durable React foam in the heel. It’s quite a lot less malleable and I’m not even sure that this stuff is the same as the stuff that’s in the Legend React 3 Shield.

Then of course in the other part of the shoe, you’ve got that very compressive Zoom X foam. It’s quite resilient but sadly less durable over the miles but very light and airy.

I would suggest there’s a slightly more brittle feel to the Zoom X foam. I know it’s Pebax-based, but it does feel different to other Pebax-based foams.

I think we’ll continue to see React foam being used very generously in the daily models over 2021.

I predict that we’ll continue to see Nike utilizing Zoom Airpods in some of their other models later this year.

Nike mixed it up a lot with the Tempo Next%. You’ve got React Zoom X and those Airpods. I’m certain that they’ll launch another version of this shoe and try to weight relieve it somewhat perhaps with a more minimal upper.

If Nike stayed true to their typical behaviors, I believe that we’ll just see an upper update to the Pegasus line this year.

I reckon the Pegasus 38 will have pretty much the same midsole and outsole unit as we saw on the 37 but just with an improved upper.

I wouldn’t be surprised if they revert back to Flywires actually as we’ve seen in the React Infinity Run Flyknit 2.

I don’t think they’ll change anything to that forefoot air unit and the React midsole. I don’t see them making any changes to the Vaporfly Next% midsole and outsole unit 2.

Those leaked images we’ve seen of the Next% 2 clearly show the exact same midsole and outsole units as per the version that was released back in 2019.

I can’t see them making any massive changes to the Alpha Fly model, either.

I mean they’re releasing that Zoom X Invincible shoe with loads and loads of stack. People have always said that the performance gained from the Zoom X shoes is in the midsole foam and I guess we’ll find out soon if that is the case.

Moving on to Reebok next …

Reebok have got their Energy foam. I suggest it’s a little less dense than Nike React. There’s some compression to it but a very stable ride. To me, it doesn’t feel anywhere near as heavy as React as well.

I think that’s my own personal opinion, though and I’m not entirely sure if that is correct. It just feels to me a lot lighter.

This does appear to be a beaded-based foam so they’ve crushed loads of beads together and probably stuck it in an autoclave and changed it to the shape that they want.

What I love about the Energy foam is that it seems Reebok can produce the shoes very cheaply and it’s a nice and resilient foam.

Then in the lighter faster shoes, you’ve got the FloatRide foam. This is a Pebax-based foam and a beaded one again.

Related: The Controversy Behind The Nike Vaporfly Running Shoes

Launching the Energy 3, we’ve already seen them re-utilize the same foam with a slightly different midsole unit and minimal changes to the upper.

Obviously, they recently launched the Run Fast 3 which has the same midsole unit as the previous two iterations.

Maybe, we’ll get an upper update to the Run Fast Pro this year, but I can’t see them making too many changes to the midsole, either. The Run Fast is one of the lightest running shoes I’ve ever run in.

I don’t see Reebok making too many changes to the expanded polyurethane midsole in the Symmetros over the course of 2021.

Saucony uses PWRRUN+ in the Triumph. That’s the denser foam that they utilize within some of their daily cushioned running shoes. This level of cushion makes these shoe great for heavy runners as well.

Also, the Triumph series is mong some of the best cushioned running shoes for bad knees.

I guess it’s more similar to React from Nike or perhaps even Adidas Boost in terms of the feel.

Again, it’s made from beads and it does look almost exactly like Boost from Adidas.

I’d suggest again this is a little denser than Zoom X and closer to the FloatRide foam that we find in the Reebok shoes.

It’s very durable though and very stable. I haven’t had any sort of signs of degradation in any of my PWRRUN PB running shoes.

Over the course of 2020, we saw Saucony utilizing that PWRRUN PB material in the midsole of not only the Pro but also the Saucony Endorphin Speed.

I can see them upping the use of those Pebax-based pellets and bringing us some shoes that are perhaps slightly lighter and some more daily offerings that utilize that foam.

I think lots of people are waiting for that Endorphin Trail actually. It looks like we’ve got a full-length PWRRUN PB midsole there.

I’m sure that Saucony will continue to offer PWRRUN+ as well in some of their daily running shoes and there’s bound to be a further iteration of the Triumph series later in 2021.

I think you can bet your bottom dollar as well that there’ll be further updated versions of the Endorphin Pro and Speed.

Ok. That’s my look on four of the top manufacturers and some of the shoes they might put out over 2021.

Let me know what your thoughts and opinions are down in the comments.