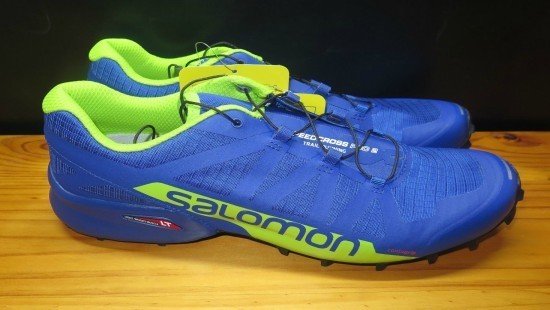 To give you a little bit of primer on how the Salomon lines work, you’ve got the S-Lab line which is the most technical, most expensive and the lightest most of the time. The next line is the Pro line which is where the Salomon Speedcross Pro falls in, and then you’ve got the regular line. All of these shoes are super high quality most of the time and not the cheapest models in the world either. All of this is to say today we’re taking a look at the 2016 Speedcross Pro, so let’s get in to it.

The welded overlays basically envelop the entire shoe. Much of this is part of the Sensifit System which does a great job of cradling especially that midfoot giving a nice sense of lockdown. I feel like with these bonded overlays you get an even closer sense of that.

One of the cool things about this is that the overlays on the side wrap fully down over the midsole with the debris protection all the way down. So basically, you don’t really see the midsole in the front two-thirds of the shoe, you can only see it in the back because it’s covered by this material and it does a great job of keeping debris and mud off. It’s also kind of plasticky so it rinses off really well.

For me, the upper has held up extremely well even in places where I would expect it to break down a little bit right where it tends to fold, but there is zero picking at all, zero pulling away of the overlays or anything like that. Apart from a little bit of dust, the Speedcross has come clean pretty well after being so dirty.

One of the things I like about the upper is that integrative feel and again I feel like that’s largely part of the fact that all the overlays which go from the top of the heel counter up into the Ghillie lacing around the Quicklace system all the way down just above over the top of the midsole.

The main mesh of the Speedcross Pro is amazing for debris and it’s also water-resistant, not water-proof though. Despite being very tight weave, it has a pretty decent degree of breathability for what it is, but not a ton of breathability. And even a little more debris protection is the tongue cover. It’s kind of a stretch piece that goes underneath the laces but over top of that tongue and helps keep the debris from coming into the foot.

What’s keeping the foot tight down in place is Salomon’s Quicklace system which you can pull up and tighten up. And of course, it features the lace pocket which does a nice job of being able to hold those laces down so you don’t exactly have to worry about the laces going all over the place. These laces run through a Ghillie Lacing setup which keeps them nicely attached to that Sensifit System that ties all the way down throughout the whole shoe.

The interior features the Salomon EndoFit System which is basically a booty kind of construction. It’s not a full booty, but it’s basically right over the midfoot. The EndoFit System is a gentle elastic sleeve that holds your foot nicely in place.

As I alluded to earlier, all the overlays come down and actually integrate directly to the toe cap which is not the hardest thing in the world but it provides you with a great amount of protection and also gives a nice shape to the toe box. This will touch on in the fit a little bit because Salomon tends to be on the narrower side. So to have a well-shaped vertically especially toe box in this shoe is a really big advantage.

The midsole of this shoe is using injected EVA foam as well as Salomon LT Muscle that sits back there. Obviously, both of these provide protection but the LT Muscle is meant to provide that protection and cushioning with a bit of flexibility especially in the forefoot. The LT Muscle does stiffen up in the midfoot because there’s a lot of material underfoot. However, this doesn’t really do anything to diminish the ride very much, and we’ll talk about this in the ride section coming up.

There’s not a lot of different arrangements and things that are going on. The outsole looks similar to the Speedcross 3, but there are some pretty key changes. First, let’s talk about the things that have not changed. The lug layout pattern on the Speedcross Pro is pretty much the same in that it’s always been directionally arranged. So the rear of the shoe is optimized for descending and the front of the shoe is optimized for ascending. The lugs are 6 mm deep Chevron shaped lugs. So those things have not changed. And there’s still Contagrip Contagrip on the bottom. Contagrip is a type of rubber that Salomon is using.

What has changed then?

One of the issues people had with the Speedcross 3 is that some of the lugs around the outside of the outsole would get cut in half because it looked like basically they had a sheet of rubber with lugs all over it and they would just cut them at a certain spot. So what you would wind up with is a kind of half lugs on the outside or the medial side. The picture below gives a clear idea of what I’m talking about here.

Without all that rubber there you can compromise the structural integrity of the lug itself. So this means that if you’re running and there’s not the full structure of the Chevron to support it, you’re going to torque that lug a little bit, and in some cases, it could even shear off. But what’s more than what is going to happen is you’re going to wear those perimeter lugs on those earlier models of shoes a little bit more quickly and this would, in turn, compromise the traction and the overall performance of the shoe.

However, in the 2016 Speedcross Pro as well as the Speedcross 4, this has been really changed a lot. It’s very imperceptible actually looking at it but you can see that all the lugs are the full Chevron shape with nothing being cut off.

It really sticks especially in some more loose and dirty stuff and actually, this is kind of built for mud and some snow and some wet terrain as it does a really great job of not holding on too much mud because of how widely spaced the lugs are while still giving great traction in situations like that.

Another big change is the updated Contagrip rubber. This is Salomon’s new mud and snow Contagrip which is specifically made to grip in as you would guess by the name mud and snow. I tried out this new rubber side by side with the earlier model of the Contagrip and I have to tell you that the amount of grip difference on a wet polished granite surface is amazing. I have run in this shoe in muddy and snowy conditions but I certainly ran on trail dry conditions and it does a fantastic job. It’s not the stickiest rubber I’ve ever felt but certainly right up there.

First, the Salomon comes in 30 mm in the heel and 20 mm in the forefoot for a net drop of 10 mm. This doesn’t really affect me very much because this is a shoe that if you’re on trail you probably spend much time up on the forefoot or at least the midfoot and so you don’t really feel as affected by that on the trail like you would on the road. If you’re a hardcore heel striker, you may be able to take advantage of that, but for me, I feel like there’s just a lot of material that adds weight back in the heel area. I feel like by shaving a little bit of that material and maybe bringing the drop down a few millimeters you’re going to be able to get a little more kind of enhanced ground feel.

At the rear of the shoe, the heel counter is actually quite rigid giving a lot of stability. This does a kind of nice job of countering the fact that you’re sitting up so high and that there’s extra bulk back in the heel. The Speedcross Pro is not only reinforced by the actual rigidity of the heel counter itself, but you’ve also got overlays that fully extend all the way back (pic 9.39).

Salomon shoes tend to run narrow. If you’ve ever run in these shoes you’ve probably noticed this to some degree. This is not always the case for the most part but it can be a trick to get used to that more “Euro” fit. For me, the Speedcross Pro isn’t narrow. But if you’ve got a wide foot, finding something that’s going to fit you maybe a little bit tricky. Keep in mind that if you’ve got a foot that you are questioning whether it is going to fit in these shoes you can go to your local running shop, or if you prefer to shop online you can do that as a lot of online retailers like Amazon will take back the shoe even if it’s been running. Just remember to definitely check the return policy exchange just to make sure you’re covered.

With the stack height of 30 mm in the heel and 20 mm in the forefoot I would expect a little more cush and comfort. However, the Speedcross does well and I felt perfectly fine on that but I just expected a little more cushion because this is a technical trail shoe particularly tuned to climbing.

There is no rock plate on the shoe but I felt like between the stack height and the lug a kind of depth keeping the things underfoot at bay. I felt perfectly protected and I didn’t really notice anything. In fact, I felt less protected sometimes in shoes that have a rock plate. The ground feels actually pretty good in this shoe and for the weight of this shoe it certainly felt quite agile and my foot didn’t feel very clunky except for every now and then I noticed there is more material in the rearfoot than needed in my opinion.

The Speedcross Pro comes in at 11.4oz. for men size 9. I should also mention that Salmon could shave about 2 ounces without really sacrificing the structural integrity of the shoe, which is important because that is the key to the shoe. That is what the ride and what the experience is all about. Maybe that’s what they did in the S-Lab Speed, which I haven’t tried yet, but if it is I will certainly let you know.

Some people may try to go up a half size to account for that different fit in there.

After some miles on trail, there’s very very little wear and it’s holding up extraordinarily well.

This is not the cheapest thing in the world, but that’s really not bad for a technical trail shoe of this quality. Again, this is a really solid shoe for the money.