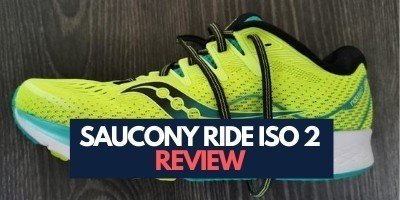 The Saucony Ride has quite a lot of heritage when it comes to me. Back in the day, the Saucony Ride was one of the first proper running shoes I had after having gait analysis.

After 50 miles, I’m going to let you know what I liked and disliked about the Ride ISO 2 and how it feels compared to the old Ride ISO.

Before we start, Saucony released the updated version of the Ride ISO 2. It’s the Ride 13 without the ISOFIT lacing technology. We’ve compared the Saucony Ride 13 to the Triumph 17.

The Ride ISO 2 is a neutral road running shoe. It weighs in at 9.8oz for men and 8.7oz for women. The men’s and women’s versions have a stack height of 27mm in the heel and 19mm  in the forefoot for a heel-to-toe drop of 8millimeters.

Compared to the Ride ISO 1, there’s been lots of things that have been carried over and there’s been a few subtle changes.

Obviously, the ISO upper carries over the same ISOFIT and FORMFIT technologies.

The midsole is still running on the PWRRUN EVA cushioning material, and the shoe still carries the EVERUN top sole.

Now, let’s talk about the subtle changes that have been made to the new ISO.

First things first, we’ve got a slightly different compound on the grip on the outsole. The forefoot of the outsole now has a new crystal rubber (yellow) from Saucony that’s supposed to improve traction and durability.

The outsole still carries the TriFlex grooves on the outsole for increased flexibility making the Ride ISO 2 one flexible shoe.

The upper has also got a bit of 3D Print detailing to increase structure and stability in the shoe. It also comes with a slightly different knitted fabric in the toe box to increase breathability.

I like the upper on the first Ride ISO shoe and I’m liking it in the Ride ISO 2, as well. It’s super comfy around the midfoot and you feel really dialed in to the shoe.

So the ISOFIT technology on the upper works really well and provides a straight-out-of-the-box comfort.

With all them subtle changes that have been made, there has been a little bit of weight added as well from the previous version.

The Ride 2 is slightly heavier than the previous model. It’s 0.1oz heavier for and 0.2oz for women.

The EVA in the midsole is reasonably firm, but then you get this nice soft top sole of EVERUN compound which is basically lots of tiny little polystyrene balls all compressed together.

So when you get that under your foot as a top sole, it feels super plush and really comfy.

I also like the 8mm offset. The ISO 2 is not too stacked up, not ‘heely’ but also not too extreme. So the 8mm offset is a really good heel height for a big mix of runners.

Whenever I  tried to do any speed work or up the tempo, the shoe felt really flat and really unresponsive.

The good thing is you don’t get that in the Ride ISO 2. So, now when you decide to up the pace, the ISO 2 comes to life, whereas before the shoe went to sleep and just didn’t handle speed that well.

This is a big surprise from Saucony because the Ride ISO series has had only ONE update.

At first, I thought the ISO 2 was going to run very similar to the Ride ISO, but it’s way more responsive.

All in all, I’m pretty happy when it comes to the Ride ISO 2.

There’s a few little things that I think could be done to again make another improvement on the shoe.

The Ride ISO 2 is not heavy by any means, but I think if they stripped a couple ounces off of it, it could make a massive difference to the shoe and that would make it one impressive neutral road shoe.

The only other thing I found comes down to laces. Again, nothing major, but when you’re going on a run especially if you’re doing a slightly longer run, I feel the shoe starts to kind of run loose and you start to lose that sort of hold around the midfoot.

Sometimes, I have to stop and kind of retie the laces again mid-run just to get that hold back across the midfoot.

No serious dislikes really, just me being a bit picky. Anyway, the likes massively outweigh the dislikes, which is always great with a shoe.

This is definitely a big improvement on the Ride ISO 1.

Now let’s get some scores on the Ride ISO 2.

The first thing to be scored is always the price. There hasn’t been a price increase even though the shoe has been updated and I always think that’s a really positive thing when it comes to a new shoe.

As you know, prices go up and down on a daily basis, so check today’s score.

The Ride ISO 2 is really comfortable and I’m really happy with the ISOFIT. I don’t think ISOFIT works well on a lot of other Saucony’s shoes, though.

There has been some big changes of late at Saucony when it comes to the ISOFIT lacing system, but with the Ride series, ISOFIT definitely works.

I was a bit disappointed with the performance of the original Ride ISO, but this time it’s way way better.

The shoe is way more responsive and very flexible.

When you start pushing the speed, the shoe feels super responsive.

So when it comes to comfort and performance, I’m going to give the Ride ISO 2 a really strong 8/10.

I have just ticked over fifty miles in the Ride ISO 2 and the shoe looks great. There are no early signs of fatigue and no excessive wear on the outsole.

Saucony added this new crystal rubber on the forefoot of the outsole to improve durability and I guess it is doing what it’s supposed to do.

The outsole on the ISO 1 wore down pretty quickly and I’ve shredded it all the way through to the EVA and that was only with about 350 miles.

So I guess adding that crystal rubber on the forefoot to the Ride ISO 2 is a really positive thing.

I think you’re going to get a lot more miles when it comes down to the outsole on the Ride ISO 2.

Looking at the upper fabric, there is a little bit of bobbling going on on the fabric after only 50 miles.

Again, it’s not a big deal and I don’t think it’s going to affect the performance. I don’t think the shoe’s going to break down quickly, but you know, whenever you see warning signs like that, you have to be a bit worried.

The last thing to score is looks. The Ride ISO OG was a pretty ugly shoe and the colorways were unpleasant.

There are lots of colorways in men’s and women’s and I think the men’s colorways are a bit stronger but they’re definitely moving in the right direction.

When it comes to looks, I’m going to give the Ride ISO 2  a much stronger score this time and I’m going to score it 8/10 for looks.

So, putting all them scores together, the Ride ISO 2 has scored a lot better than the first version.

Bringing this shoe review to a quick conclusion, I feel the Ride ISO 2 is a good update.

It is still super comfy like the original shoe with a really good fit around that midfoot but way more responsive.

What I found is the faster I ran in it, actually the better it felt, which was kind of the opposite in the original ride ISO.

So we have definite improvements on performance.

I personally think this should be a great entry-level neutral road training shoe. If you’re new to running, you’re looking for a nice lightweight comfortable straight-out-of-the-box responsive training shoe that maybe you can do a bit of speed work in.

This is definitely worth a shot. Fit-wise, I would say the Ride ISO 2 works well with a narrow foot. However, with this ISOFIT technology, I think there’s a lot of adjustability in the upper if you are a bit wider.

This is a really good all-round shoe. I just want to highlight that if you are a heavier runner and heavier on your heel, maybe there’s better neutral shoes in the running market for you.

The Ride ISO 2 doesn’t react particularly good to a heel striker because it’s very soft in the heel and it’s is very flexible.

But if you are a more midfoot/forefoot neutral runner and you’re looking for that responsive light neutral training shoe, the Ride ISO 2 is definitely worth a try.

I have been really impressed with the updates, but I personally think Saucony have really struggled as a running brand.

They made a lot of bold changes a few years ago and I think a lot of those changes didn’t fundamentally work.

Luckily for them, we’ve seen some good changes with the Ride ISO 2, the new Guide 13, and the Saucony Triumph 17.

With the Guide and the Triumph, Saucony dropped the ISOFIT lacing system, which I think is definitely a step in the right direction.

I’ve never been a big fan of this ISO upper even though it does work in the Ride. I think removing that in a lot of those shoes is really going to help the brand out.

So that’s it for this Saucony Ride ISO 2 review and I really hope you find it useful.

Please get involved. Get in the comments below.