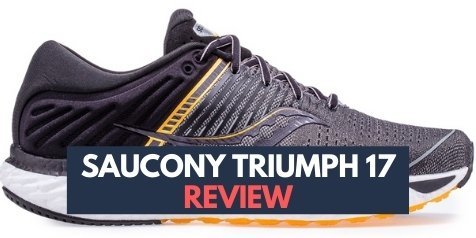 The Saucony Triumph 17 is a comfort-cushioned high-drop road running shoe.

If you’re looking for even more cushioning, make sure you read this detailed comparison between the Hoka Bondi and the Hoka Clifton.

Let’s get right into it…

Starting with the bottom, the amount of cushion in the Saucony Triumph 17 qualifies this as a comfort cushion shoe.

Related: Saucony Triumph vs Hurricane – The New Hurricane Of Stability

I don’t know any factories that are going to have tolerances in the hundredth of the millimeter, but even more interesting is when we measured it.

The way we measure is from the bottom of the sole to just underneath the insole. We got completely different numbers on this.

It’s a millimeter more than Saucony advertises the shoe as having, but it’s less overall what we call stack height than they advertise, as well.

So, what does that extra heel height mean for running in this shoe?

Well, more than any other shoe I’ve run in, I feel the heel-to-toe offset and so for walking around, that pillowy feel really feels fantastic.

When I start running, basically, it’s very difficult for me to not strike my heel in this shoe. What that means is that I’m actually striking a little bit ahead of my center of gravity.

I really recommend it for folks that have a kind of an extended stride and a longer stride. If you’re going to be hitting your heel and if you’re going to be landing in front of your center of gravity, this shoe is going to give you fantastic protection and feel there.

Of course, I always recommend that people work on their form and try and land under their center of gravity.

No matter how you measure it, though, 30 millimeters of cushion is a lot of cushion especially with the type of foam that that Saucony is using.

I’ve talked about Saucony’s EVERUN in the past. EVERUN was their first attempt at a response to things like the Adidas Boost material.

Traditionally, shoes have been made out of what’s called EVA. Basically, EVA is kind of an air-blown rubber that has a nice weight-to-cushion ratio.

In the past few years, people started experimenting with really interesting ways to put polyurethane into the sole of a shoe.

What they do is they take very small balls of polyurethane and they compress them together. So if you look really carefully at the sole of this shoe and the sole of competing shoes like the Adidas Boost, you’re going to see those balls kind of squished together making up the sole.

This is important because the air in between those balls is what allows you to use polyurethane and still keep a shoe lightweight.

So, with this TPU material, with the same amount of cushion level that you’d have in a traditional EVA foam, you can actually get more compression, more bounce, and a longer-lasting midsole than you would have had in traditional shoes.

People talk about energy return and bounciness, but I tend to refer to shoes as either very pillowy or very springy.

What these TPU midsoles do is kind of combine that so you have something that really compresses but then bounces back at you.

When Boost came out, Saucony introduced their EVERUN and really felt like they’d improved on it. Now, they’ve moved on from EVERUN to something they call PWRUN+.

This is going to get a little complicated because Saucony calls their TPU midsole PWRUN+ and they call their traditional EVA midsole PWRUN.

Folks, that’s marketing. PWRUN is EVA and a traditional sole while PWRUN+ is a TPU sole that’s kind of next-generation sole.

There are big differences between them. So, when you see something like PWRUN+ on a shoe, you’re going to know that that’s generally speaking a full midsole of a very bouncy material.

I don’t know of a shoe that does that better than this Saucony Triumph 17. This is an incredibly cushioned running shoe. When you put it on your feet, you literally feel yourself sink in and feel it bounce you back up.

Running in the Saucony Triumph 17, you’re going to get that same feel from the forefoot that you are from the heel.

It’s incredibly comfortable and incredibly bouncy when running in this shoe.

Talking about the combination of these materials, typically a TPU midsole is a little bit heavier, but they’ve done a really nice job minimizing weight on the top of this shoe.

My size 13 measures 12.8 oz, which while not light is not a really heavy type shoe. For a shoe with this much cushion, with this much feel, and this much bounce, I would expect it to weigh more than that.

Moving on to the outsole, Saucony is using their longest-lasting rubber on the bottom combined with a more sticky rubber in the black areas where you’re going to have a little bit more control of where you’re hitting the ground.

I really like the fact that this TPU midsole combined with this translucent crystal rubber makes this one of the longest-lasting outsoles I know of.

You’re not going to run through this shoe in a month or two months. This is a long-lasting shoe.

The industry standard is 3 to 500 miles on a shoe. 300 miles is an incredibly fast-wearing shoe and 500 miles would be a well wearing shoe.

I would expect someone getting 500 miles on a typical shoe might get 6 to 700 miles on the Saucony Triumph 17.

I’m very confident in both the midsole and the rubber on the bottom.

Why am I comparing these shoes?

First, the Saucony Triumph 17 is the update to the Triumph ISO 5.

In the past five models, Saucony has been introducing their ISOFIT lacing technology. ISOFIT is basically fingers that come over and really lock you into the shoe.

What they had with that was a lot of gapping, a lot of creasing, and a lot of cosmetically unappealing results.

And so, Saucony have gone away from their ISOFIT and moved towards basically a single piece of engineered mesh.

This new setup kind of provides a really nice wrap around your foot without having to use those ISOFIT fingers.

My personal opinion on how the Triumph 17’s upper looks off the foot is it seems like there is some kind of general bending on the upper that doesn’t need to be there.

But once you put it on your foot, it really does wrap around your foot and it feels fantastic. Saucony has done a really nice job here.

If you wanted to compare a glove and a mitten, the Saucony Triumph 17 would be a glove-type fit around the midfoot.

The toe box itself is tapered. What I mean by that is it kind of comes to a point in the front.

However, the material on the toe box has a little bit of give to it. It still feels very comfortable as long as you’re sized correctly in it.

One thing that I found on the upper is although this is a super soft material on the toe box, I’ve heard about a couple of people that have had a little feedback about a feel just under where the first eyelets start.

I’m not sure if it’s a compression issue or not, but just a little bit of pressure on their forefoot as they run.

This happens kind of across different speeds, everything from about a 7-minute mile to a 10-minute mile.

I think you’re going to be very comfortable inside with this nice padded tongue in it. Everything about the Saucony Triumph 17 really locks your foot in without feeling compressed.

As you move to the heel, this is a very pronounced heel cup. Some shoes are going to have a very hard heel cup and the Triumph 17 is one of them.

If you tap on the heel, it’s a solid piece of plastic underneath. This is not going to move on you and it really comes in pretty dramatically.

So what we find is if your heel is very flat as it goes down from your calves to your heel, this might be a little dramatic for you.

The material on the inside is very soft and almost feels like a Tempur-pedic type material, but it’s not so soft that you miss the heel’s rounded portion.

Definitely, this is a shoe that you want to tie on and make sure your heel is shaped in the same way the shoe is.

If it is, your heel will go in and lock in there and it’ll feel great. If not, the top of the heel section does have some potential to do some rubbing on your Achilles area. So definitely be aware of that.

Sizing-wise, the Saucony Triumph 17 does run true to size. It just feels like it’s a little more wide open than a traditional tapered shoe would be.

Although the toe box does feel like it actually has some give to it, it does lock your foot in really nicely.

Overall, the fit is very nice on the upper.

One other interesting factor is if you have a wider foot, Saucony does make the Triumph 17 in a wide.

What that means is that they’re going to add a couple of millimeters of width throughout the entire shoe.

So, if you have a narrow heel, you’re going to want to stay away from the wides. If you have the full foot that’s wider, then that’s going to be a great solution for you.

If you have a narrower heel, you’re going to want to try something that maybe has a wider just toe box area and maybe a more rounded top.

But if your whole foot is wider, this is going to be very comfortable.

Now that width does add on a couple of tenths of an ounce. Compared to the 12.8 ounces that we got with the standard fit, the wide fit in a size 13 is going to come in at 13.1 oz.

A final interesting piece about the Triumph, as they move from the ISOFIT back to the Triumph 17, the price of the shoe actually went down about $10, which is pretty rare in the industry.

For the price, I think it’s a fantastic opportunity to try this new PWRUN+ compound and I really think you’ll like it.

For those of you that are extending out and taking a longer stride, I think this is going to be a really nice option for you and hope you’ll give it a shot.

So this is all I have for this Saucony Triumph 17 review and thank you for making it this far.

Tell us what you think down in the comments section.

I’d be more than happy to hear your thoughts, folks.

With everything that’s going on these months, keep running and stay safe out there?