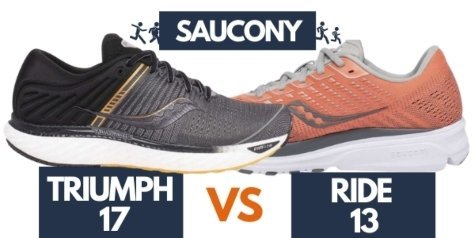 Actually, we’re going to be comparing the Saucony Triumph 17 vs Ride 13.

I’m going to talk about the similarities, the differences, and eventually tell you which one of the two shoes I’m going to get.

Obviously, Saucony has made sure that runners do not like the ISOFIT lacing technology.

And that’s why they’re trying to steer away from it and kind of give their shoes that upper with the traditional lacing system.

First off, people confuse the neutral Ride with the Saucony Guide which is a stability shoe just like the Hurricane.

I did go true to size in both of these shoes. So, if you have one and want to pick up the other, definitely go for true to size on the other choice.

The heel cup on these two is very similar although on the Ride 13 you do get a little less foam.

The fit through the toe box is almost identical. Even though the Ride 13 does appear to be a little bit on the narrower side of the spectrum, that isn’t the case.

The landing platform on the Triumph 17 is much wide so I was expecting a bit more room through the toe box and in the middle of the foot.

Overall, no complaints there on either shoe. Both Saucony’s feel very true to size and they feel great. They feel just like a sock-type fit.

If you’re overwhelmed at how running shoe brands size their shoes, we’ve done a nice comparison of shoe size between brands.

I didn’t feel any heel slippage on either them after I did the runner’s knot. Although the memory foam on both shoes is very nice, I found that it did give me a little bit of trouble in terms of heel slipping.

That’s something to be aware of.

Another similarity between the two, which honestly is something I don’t really enjoy, is these stretchy pipe laces.

In theory, I think that they would be more comfortable, but for me, I don’t really enjoy them. I find them really long and I find them almost like an extra source of heat.

I think I will eventually change them and that’s something that’s really good. It’s not like having an upper that I don’t like that’s not modular.

So, overall, the laces and the fit are very similar between the Ride 13 and the Triumph 17.

Now, let’s talk about the more exciting parts, the differences.

Both shoes have an 8-millimeter heel-to-toe drop, but…

Folks, that’s marketing. PWRRUN is EVA and a traditional sole while PWRRUN + is a TPU sole that’s kind of next-generation sole.

The differences that I’m feeling between these foams is really just down to how cushiony they feel.

The PWRRUN foam is by no means a very hard foam. It does give you enough of that plushness and comfort to make sure that your joints are protected and you can go those longer distance without worrying about if your joints are going to feel like super beat-up afterwards. This foam does a great job of offering that comfort.

However, the PWRRUN + on the Triumph 17 is of a whole other level of cushion. The best part about the PWRRUN + midsole is although it is that beautiful and cushioned, it doesn’t give you that sink-in feel.

When you put in the power and energy to the PWRRUN + midsole, you are getting something back. It’s not like all that energy is being lost every time you put it in. It is giving you a responsive feel.

What I mean by that is when you put in some power into the foam, it’s not just going to stay compressed, it’s bouncing back more and helping you along with each stride. That’s something you’re really going to enjoy about the PWRRUN + foam.

However, there’s a lot of it on the Triumph 17 and it does add some extra weight.

Talking about the weight…

The Saucony Triumph 17 is obviously heavier than the Ride 13.

So, if you’re someone that doesn’t like having heavy shoes, the Ride 13 would be your go-to shoe. But I will say that the Triumph 17 weight is pretty well distributed because it doesn’t feel like a massive brick on the foot.

Again, the Saucony Triumph 17 is a beautiful shoe to run in, but if you don’t like heavier shoes, I would stay away from the Triumph 17 and go towards the Ride 13.

The next difference is going to be on the breathability standpoint.

The Saucony Triumph 17 and the Ride 13 by no mean are breathable. The Ride 13 is still a little bit of a hot shoe, but it definitely wins in terms of breathability.

Your foot is not going to be so soupy after a long run though, but on the Triumph 17, the heel collar is a little bit less breathable.

Overall, your feet are going to be a little bit cooler using the Ride 13. Although you’re not going to get the best out of either shoe, if breathability is something you’re concerned about, the Ride 13 is something that I’d lean towards in that regard.

Another key difference and something that I really didn’t know I enjoyed until it came into my life is the flexibility given by these flex grooves in the Ride 13.

What that really does is just have that toe-off feel a little bit less effort. On the Triumph 17 where you’re just getting like this big block of foam essentially, the toe-off is not as smooth.

You have to bend this foam in order to get that toe-off on the Triumph 17 where on the Ride 13, it’s being aided by the TriFlex technology Saucony is calling it.

I must say that the Ride13 is named properly because it is definitely a ride and a half and you’ll definitely enjoy every stride you take in it thanks to this TriFlex technology.

I do believe that has a lot to do with why I love running in the Ride 13 so much.

The last difference I want to highlight for you folks is the outsole.

The outsole on the Ride 13 is that traditional blown rubber where on the Triumph 17, you’re getting that crystalized rubber.

I don’t really fully understand the difference between them, but what I can say is the Triumph 17’s outsole does feel a little less flexible.

I always thought it was because of the TriFlex technology in the Ride 13. However, what I’ve been hearing is that the crystal rubber is a little bit less flexible but it’s a lot more durable. Saucony has transitioned over to the softer blown rubber for the Saucony Triumph 18.

So, the outsole setup is a difference that I didn’t really expect to make a big difference for me, but I guess it does and maybe that’s why the Triumph 17 just feels a little bit stiffer, I guess.

Anyway, those are the differences.

Saucony Triumph vs Ride – Which One I Would Choose?

Now let’s talk about if I had to choose one of these shoes, which one would it be.

I’m going to go ahead and say it. If you can get both of these shoes, I would highly recommend that you pick both of them up.

They complement each other very well if you like Saucony shoes anyway.

The Triumph is one of the best running shoes for those easy days, but it can still be used for those faster days, too. It’s very versatile and the same goes for the Ride 13.

The Saucony Ride 13 is plush enough to be used for easier days, but it definitely feels a lot better when you want to pick up the pace. I guess the Ride 13 just feels much more nimble on foot than the Triumph 17.

Of course, it’s not going to be great to use the Triumph 17 for a track session, but you know, sometimes you have to pinch those pennies and pick one shoe.

Even though these shoes are so nice and I love both of them so much, this decision is very hard for me. But, contrary to what you may have been feeling so far, I have to say that the Triumph 17 would be the shoe that I would pick up if I had to pick only one of them.

The reason for that is because it feels a lot better on those easy days. I went for a run the other day and the Triumph 17 just soaked up those miles and the cushion felt so nice.

Also, I took it out for a little bit more of a faster-pace run, and it performed admirably at that pace as well.

So, the Triumph 17 is much more versatile in the sense that on easy days you can really go easy and it feels fantastic. On the other hand, for those easier runs, the Ride 13 is just not as plush and the foam is definitely a little bit more unforgiving than the PWRRUN +.

That is my choice and that is a matter of preference. But, as I said, if you had the ability to pick up both of these, I definitely would recommend it. And if you don’t prefer those heavier shoes, definitely get the Ride 13.

Or, if you don’t like feeling that really cushiony, the Ride 13 is your style.

But for me, I do prefer having that cushy stuff for my easy days and that’s why I’m going with the Triumph 17.

So, that pretty much wraps it up for today.

If you’ve learned something new from this Saucony Triumph vs Ride, please share the post with your friends.

And if you’ve run or you currently own one or both of these shoes, tell us about your overall experience.