Hoka One One is a company of runners committed to creating the best-engineered running shoes to the world’s toughest terrain and races. It started with the need to run fast and far. 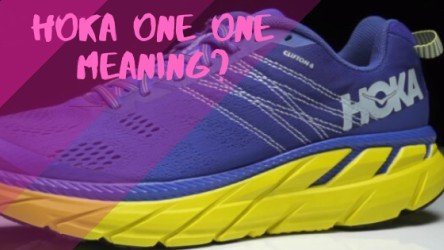 What does Hoka One One mean?

It actually means ‘freedom to fly?’ or ‘time to fly’

What language is Hoka One One?

It’s actually believed to be Polynesian.

How is Hoka One One pronounced?

Ultramarathon champion and adventure racer Nicolas Mermoud (previously with Solomon) wanted shoes that he could wear to attack downhills.

Working with former co-workers and fellow athletes Jean-Luc Diard, Christophe Aubonnet, and Sebastian Mazars, the group began to work with an oversized concept and experimented with shaping the midsole to develop unique geometries never before used in running shoes.

[pullquote align=”normal” cite=”Jean-Luc Diard”]At one point in time, you have to dare. You have to see if there is within the prototypes you are going to do if there is one single thing that makes a difference.”[/pullquote]

For two years, the group continued to experiment using feedback from runners.

Finally, they found the results they were seeking, a shoe with a unique carved geometry that had more than double the cushioning material than traditional running shoes. The Mafate became the first model of this new competing brand, Hoka One One.

Soon, other ultra-marathon champions and triathletes became aware of Hoka One One.

[pullquote align=”normal” cite=”Rob Lea, world champion”]The first time you’ve seen a Hoka, everyone is a little bit skeptical about Hoka. It seems like a different shoe and it is a different shoe. There’s no hiding that and that’s the beauty of it. They’re amazing shoes and once you wear them once, you’re going to want to be in a pair from then on running. It has changed my running and it’ll change anybody else’s experience as well.”[/pullquote]

[pullquote align=”normal” cite=”Jen Benna, world champion”](Hoka) It takes away all of the questions that I might have with downhill running or rocks. I can just fly.”[/pullquote]

[pullquote align=”normal” cite=”Karl Meltzer, record holder for most 100-mile race wins”]Call it the maximalist, call it what you want, but I’ve always liked a soft shoe. I think whoever tries them is going to feel that difference and this shoe has really created that buzz now and it makes that journey so much better.”[/pullquote]

Born in Europe, Hoka One One emerged in the US market in 2010. By 2015, that brand had extended the product line with award-winning success.

Validated by the ultra athletes who endured the greatest physical challenges, runners and coaches of all distances and abilities began flocking to Hoka One One.

[pullquote align=”normal” cite=”Brad Hudson, Coach of elite national and world-class athletes”]”It doesn’t really matter how new a company is, what’s more important is what elite athlete are looking at and what can actually help them. I think Hoka is very innovative and I think the future looks great for what it can do for our athletes.”[/pullquote]

[pullquote align=”normal” cite=”Leo Manzano, 2012 Olympic 1500-m silver medalist”]”What I like about Hoka shoes is that they’re very responsive, they’re very light and they also provide a lot of support.”[/pullquote]

The width of the outsole provides a broad base of support. Together, these provide great shock attenuation.

The uniquely engineered Active Foot Frame midsole geometry features a high sidewall wrap that allows the foot to sink into the shoe as opposed to simply sitting on top of the midsole. It’s adaptable to a wide range of feet and styles.

The RMAT suspension midsole is made from a highly elastic material that provides a responsive but stable ride.

Part of the magic to the Hoka ride quality is in the midsole geometry. Hoka midsole geometry incorporates a Meta-Rocker that is specifically engineered with a low heel-toe differential and a sculpted outsole radius in the heel and toe. The positioning of the Meta-Rocker is varied according to the shoe model and the model’s primary purpose.

The upper was created with ultra-thin no-sew construction for superior fit and comfort. A layer of EVA built closer to the foot provides the signature ride for the quality of Hoka shoes.

Looking into the future, Hoka One One will continue to innovate and create. Their team is constantly experimenting with new materials, new geometry, and new constructions to continue providing athletes and normal runners with the signature Hoka One One experience.

With maximum cushioning, Meta-Rocker shaping, superior stability, and great rebounding, Hoka shoes empower runners. From the Alps to the Sierras in trails, roads, and tracks and between to get the most out of every stride day after day.

Quick reviews of some Hoka One One shoes

Hoka One One Bondi 6

All-new for 2018, the Bondi 6 received several noteworthy updates while still retaining the shoe’s maximal cushioning philosophy. One of the main changes to the shoe can be seen with a modified midsole and an early-stage meta-rocker design.

While the Bondi 6 continues to offer a high level of shock absorption, the small tweaks should enhance the underfoot feel and create an even smoother ride.

On the upper, modified overlays are used to dial in fit while a new Lycra Comfort Frame heel creates a soft and supportive heel wrap.

Finished off with a redesigned outsole with strategic rubber placement, the Bondi 6 is built to offer durability and traction for long miles on the road.

Hoka One One Clifton 6

This could arguably be the most popular shoe in the whole collection. Just like the Clifton 7, the Clifton 6 has been completely redesigned from top to bottom.

In the midsole, we’ve got even softer cushioning than previous versions. On the outsole, we continue to see that exposed foam and then the strategic rubber in the heel and forefoot.

Finished off with a breathable mesh upper that’s been optimized for an even better fit, the Clifton 6 continues to be a great option for your daily training as well as your longer distance runs.

Hoka One One Carbon X

You probably saw it on the feet of Jim Wamsley when he ran the 50-mile world-record. This is the Hoka Carbon X. Hoka has been tinkering with carbon fiber plates recently. You’ve probably seen the carbon Rocket, but the Carbon X takes that to another level.

The first thing I’m going to talk about is the midsole which offers a lot of cushioning. This is all rubberized foam and it works with a carbon fiber plate to create that springy ride.

It also features an extremely exaggerated rocker design. This is just going to further create that smooth ride and that springy propulsion forward.

On the outsole, we have that exposed material. This is just further going to create a lightweight design and it’s going to keep things ready to go on race-day.

Finally, on the upper, we’ve got that thin engineered mesh.

Hoka One One Rincon

Right underneath your foot, we see a lot of cushioning. It’s light and soft and it’s very versatile.

On the outsole, we have a lot of exposed material in the midfoot as well as some strategic rubber in the heel and forefoot.

Finished off with this thin and breathable upper, this shoe has everything you need from tempo day to daily training.

Hoka One One Evo Mafate 2

The last shoe is a beast on the trails and it was built for UTMB. This is the Hoka Evo Metate Compared to the previous version, it’s pretty similar. We continue to see that high-level of cushioning in the midsole as well as that Vibram Mega Grip on the outsole to give that real grippy traction.

The only real difference with version 2 is a slightly updated Matrix upper as well as this strategically placed Lycra strip on top of your foot to just create an even more comfortable foot wrap.

Overall, the EVO Mafate is a great option for the trails.